MANCHESTER, England (AP) — Anti-ownership protests by Manchester United fans forced the postponement of a Premier League game on Sunday against Liverpool after the stadium was stormed and thousands more supporters blocked access into Old Trafford as they demanded the Glazer family sell the club.

The unprecedented cancelation of a game in the world’s richest soccer league due to fan protests is the culmination of long-running anger against the American owners that began with a 2005 leveraged takeover that loaded debt onto the club. But the wrath of supporters has boiled over in the two weeks since the New York Stock Exchange listed club was part of the failed European Super League breakaway that collapsed amid a groundswell of condemnation.

Supporters gaining access to the pitch — before the two teams even traveled to Old Trafford — was even more startling given the strict coronavirus measures in place around the stadium that keep games closed to any spectators. One of the flares set off by fans was launched into the stands where the Sky Sports television team was already broadcasting more than two hours ahead of the scheduled kickoff.

Although the protest had been announced in advance, the stadium forecourt on Sir Matt Busby Way was still able to be accessed by thousands of fans — many chanting “We want Glazers out” as flares were set off.

Fans holds up a banner as they protest against the Glazer family, owners of Manchester United, before their Premier League match against Liverpool at Old Trafford, Manchester, England, Sunday, May 2, 2021. (Barrington Coombs/PA via AP)

The crowd was only dispersed after baton-wielding police and officers on horseback charged fans as clashes erupted under a shower of flying glass bottles about 20 minutes before the game was due to have started. Two police officers were injured and one required emergency treatment for a “significant slash wound to his face” after being attacked with a bottle, the Manchester force said.

United said the game was postponed “due to safety and security considerations around the protest” after discussions with police, authorities and the league.

“Our fans are passionate about Manchester United, and we completely acknowledge the right to free expression and peaceful protest,” United said in a statement. “However, we regret the disruption to the team and actions which put other fans, staff, and the police in danger. We thank the police for their support and will assist them in any subsequent investigations.”

The Premier League, which has yet to announce a new date for the match, expressed concern about the disorder. Protesters had also gathered outside the United team hotel in central Manchester.

“The security and safety of everyone at Old Trafford remains of paramount importance,” the Premier League said in a statement. “We understand and respect the strength of feeling but condemn all acts of violence, criminal damage and trespass, especially given the associated COVID-19 breaches. Fans have many channels by which to make their views known, but the actions of a minority seen today have no justification.

“We sympathize with the police and stewards who had to deal with a dangerous situation that should have no place in football.”

Supporters wore green-and-gold scarves and also set off flares in the colors of the club’s 1878 formation. It was a club without any debt until the Glazers arrived and the latest half-year accounts showed it had soared 16% year-on-year to 455.5 million pounds (around $630 million). Payments on interest, debt and dividends to the Glazers have cost United more than 1 billion pounds.

The Glazers, who also own the NFL’s Tampa Bay Buccaneers, have declined to engage with fans or media since buying United in 2005. 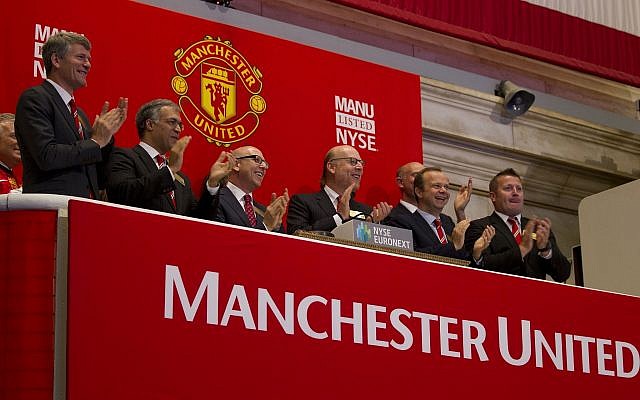 Executives from Manchester United, including Avram Glazer, fourth from left, and Joel Glazer, third from left, applaud after ringing the opening bell at the New York Stock Exchange on Friday, Aug. 10, 2012 in New York. (AP/Jin Lee)

Former Manchester United defender Gary Neville, who was inside Old Trafford preparing to commentate on the game for Sky Sports, called on the Glazers to put the club up for sale.

“There’s huge discontent, not just across Manchester United fans, but I think for football fans up and down the country and I think they are just saying enough is enough,” Neville said. “The Glazer family have been resilient and stubborn for many, many years. I think they are struggling to meet the financial demands that this club needs and have done for some time.

“This stadium, if you go behind the scenes, is rusty and rotting. The training ground is probably not even in the top five in this country.”

Although co-owner Joel Glazer pledged on the club website two weeks ago that he was “committed to rebuilding trust with our fans,” there is no sign of that happening yet.

“They have never met the fans once,” 33-year-old fan Jack Evans said. “It’s time for them to go.” 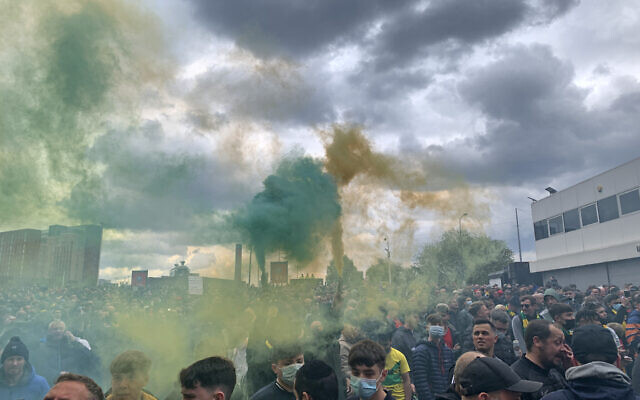 United and Liverpool were among six Premier League clubs that tried to form an exclusive European Super League along with three clubs each from Spain and Italy. Widespread opposition quickly ended the project, with all six English teams backing out within 48 hours of the announcement.

The “Big Six” clubs have been in damage control since, offering various forms of apologies and statements of regret, while fans long frustrated with billionaire owners have called for wholesale changes.

“This could be an important moment to change football for the better,” Greater Manchester Mayor Andy Burnham said. “We should all condemn violence of any kind and keep the focus on the behavior of those at the top of the game.”

United fans’ protests against the Glazers have been sporadic as United became the record 20-time champions of England. While they erupted in 2010, the dissent lessened as Alex Ferguson delivered more trophies.

But the last Premier League title was won as he retired in 2013 and since then neighbor Manchester City has become the dominant force in England — funded by an owner in Sheikh Mansour who is concerned about prestige and image for Abu Dhabi rather than draining cash from the club.

If United had lost the planned game against Liverpool, City would have won the Premier League title for the third time in four seasons.