A new Israeli tuberculosis-detecting skin patch will reduce the huge number of people who die from the disease due to a lack of diagnosis, and could help the world eradicate it altogether, scientists say.

Tuberculosis is responsible for 1.4 million deaths a year, almost exclusively in poor countries. It is easily transmitted by sneezing, spitting and coughing, and each infected person passes it to more than 10 people on average.

Treatment is available, but cases are often missed due to poor provision of tests, which require lab processing.

The World Health Organization has considered tuberculosis a “global health emergency” since 1993, and highlights the power of testing, reporting that an estimated 60 million lives were saved through diagnosis and treatment between 2000 and 2019. But testing infrastructure is poor, and around 3 million cases are missed annually.

A research team from the Technion-Israel Institute of Technology has revealed, in a peer-reviewed journal article, that it has produced and tested a patch that gives a diagnosis an hour after it is attached to the skin.

“The patch contains sensors made from nanoparticles, and what we’re doing is sensing changes in the smell pattern of the person, which can tell us with high accuracy whether or not they have tuberculosis,” Dr. Rotem Vishinkin told The Times of Israel.

Illustrative image: A young tuberculosis patient waits in a line to show the doctor his x-ray at the Lal Bahadur Shastri Government Hospital in Ram Nagar in Varanasi, India. (AP Photo/Rajesh Kumar Singh)

“Simplifying diagnosis is important for detecting cases and enabling people to be treated, and this is our focus,” added Vishinkin, whose team hopes it will help healthcare providers in the developing world to eradicate the disease.

She carried out the research under the supervision of Prof. Hossam Haick, a pioneer of disease detection using smell, whose past work is the basis for a new respiratory monitoring device that is being developed with a major European Union grant. 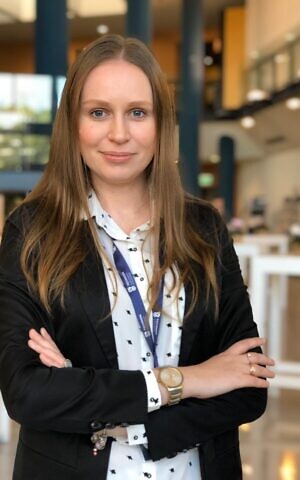 The main advantage of the new tuberculosis patch is that it can expand testing way beyond areas where there is a good infrastructure of clinics and labs, said Vishinkin.

“The patch is simple to use, and just needs to be placed on the skin,” she said.

In the current model, a computer is needed to provide results, but the final product will automatically transmit results to a cellphone or to a clinic, Vishinkin added.

With funding from the Bill and Melinda Gates Foundation, her team has tested the patch on 1,000 people — in South Africa, India and Latvia — and it showed 90 percent sensitivity. More testing is underway, and the Technion team hopes to get the product on the market within a few years.

Vishinkin said that the nano-sticker format could in the future be used to diagnose other diseases, helping to reduce missed cases for a range of conditions.