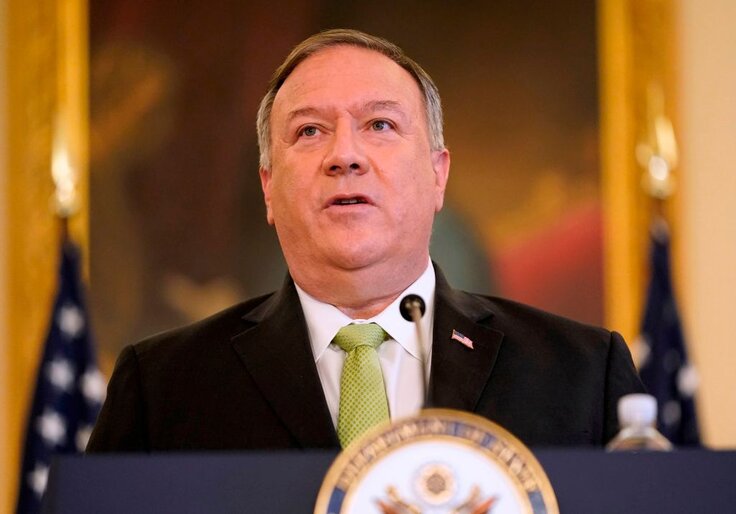 JERUSALEM—Secretary of State Mike Pompeo arrived in Jerusalem on Wednesday to usher in the first-ever official ministerial visit from Bahrain to Israel, an event that Israeli prime minister Benjamin Netanyahu said would not have been possible without bold action by President Donald Trump.

Leaders from the United States, Israel, and Bahrain gathered to formalize the Abraham Accords, a landmark regional peace agreement brokered by the Trump administration with Bahrain, the United Arab Emirates, and Israel.

“Frankly, this day would not have happened, these Abraham accords would not have been signed without President Trump’s crucial support and leadership,” Netanyahu said during a joint press conference with Pompeo and Bahraini foreign minister Abdullatif bin Rashid Al Zayani.

No reporters were present at the press conference, and no questions were taken. The visit comes against the backdrop of the Trump administration’s likely defeat in the 2020 presidential election. Netanyahu will be losing a key U.S. ally as the administration of former vice president Joe Biden decides how it will handle diplomatic issues such as America’s decision to recognize Jerusalem as Israel’s capital city. Biden allies and those most likely to serve in his administration have publicly opposed that move. They also are likely to reinstate U.S. aid dollars to the Palestinian Authority, which continues to pay salaries to terrorists and their families.

Pompeo, who opened his remarks by stating that he was happy to be speaking from Jerusalem, the “rightful capital of the Jewish homeland,” noted that Trump inked three historic peace deals in just over two months—something multiple Democratic administrations failed to do.

Pompeo also made sure to note that these peace agreements between Israel, Bahrain, and the UAE send a message to the Iranian regime about the shifting Middle East landscape. As the Trump administration finishes its first term in office, Tehran will be a centerpiece of its agenda. The State Department announced new sanctions on Iran just hours after Pompeo landed in Israel. It has made clear its intent to continue down this path until vacating office on Jan. 20.

“These [peace] agreements also tell malign actors like the Islamic Republic of Iran that their influence in the region is waning and that they are ever more isolated in this [and] shall forever be until they change their direction,” Pompeo said.

Pompeo also is expected to take a milestone trip to the West Bank and Golan Heights—the first for any U.S. secretary of state. Observers view the trip as part of a larger effort by Pompeo to highlight the differences between the Trump administration’s diplomatic priorities and those of the incoming Biden administration. American administrations have historically avoided taking a position on the status of disputed and annexed lands in Israel—most notably the northern Golan Heights area bordering Lebanon and the West Bank surrounding Jerusalem.

The Trump administration took unprecedented action when it recognized Jerusalem as Israel’s capital city and moved the American embassy there. It also has sided with Israel in its efforts to assert authority in the Golan Heights, a critical region for border security as Lebanon becomes increasingly controlled by the Iranian-backed terror group Hezbollah.