President Donald Trump’s misleading presentation of himself as a peace candidate has gained some traction with the American public, with even Democrats offering little pushback to his latest bid to promote that idea, new HuffPost/YouGov polling indicates.

Roughly two-thirds of Americans have heard that Trump helped forge agreements between Israel and two Arab states that previously refused to recognize that U.S. ally, according to the poll. A third of Democrats back those deals.

This could be good news for a president who insists he’s a peacemaker in spite of his actual national security record, which features a massive troop deployment to the Middle East, brutal U.S. interventions in places like Yemen and Somalia, a disdain for diplomacy and frequent fantasies about inflicting violence abroad.

The deals with Israel that Trump helped broker, which his team refers to in grandiose and quasi-biblical terms as the Abraham Accords, give the president’s supporters an apparent win to cite that’s less complicated to explain than his other policies, like ongoing negotiations to withdraw the U.S. from Afghanistan. Trump has tried to summarize those plans in simple promises that he is almost certain to break, like pledging this week that all American troops will return from Afghanistan by Christmas.

Trump’s advisers see the Mideast accords as politically useful, particularly with Jewish Americans and evangelical Christians for whom Israel is a top concern. To some extent, the HuffPost/YouGov results vindicate that thinking, showing the deals can have cross-partisan appeal: it’s rare for just 15% of Democrats to disagree with a Trump policy.

Foreign policy is rarely a decisive factor in U.S. presidential elections; these days, it’s seldom mentioned in campaign materials and surveys that are dominated by concerns about the coronavirus pandemic and its economic toll. The polling indicates that even Americans who have heard about the agreements are unaware of all of the particulars. Only 15% of Americans said they had heard a lot about Trump’s Middle East deals. Their reactions to the agreements were split largely between approval and uncertainty: 49% said they believed the deals to establish diplomatic relations were a good thing, with 41% saying they weren’t sure what to make of them and just one-tenth viewing the development as a bad thing. Thirty percent said the agreements made the prospect of war in the Middle East less likely, with 14% saying it made it more likely, 21% that it had little effect on the likelihood of war, and the rest that they were unsure.

The deals gave Israel diplomatic ties with the leaders in Abu Dhabi and Manama for the first time. U.S. and Israeli officials argue they create the possibility of Israeli relations with other Middle Eastern countries, most of which say a relationship is contingent on an Israeli settlement with the Palestinians. But they skirt around the Israeli-Palestinian dispute and other key sources of regional tension like the enmity between U.S. partners and Iran.

Trump has pledged that “at least five or six countries” will sign similar deals, bolstering Israel’s position in a Muslim-majority region where it’s an outlier and has repeatedly fought wars with its neighbors. His son-in-law Jared Kushner asked Saudi Arabia, which is close to the Trump administration, to do so, but the kingdom’s leadership felt that was impossible, the Wall Street Journal reported, because of the sympathy for the Palestinians and the ultra-orthodox understanding of Islam that remain common among many powerful Saudis.

At present, U.S. officials are pressuring Sudan to agree to its own version of the Abraham Accords prior to the November election, dangling promises of aid. 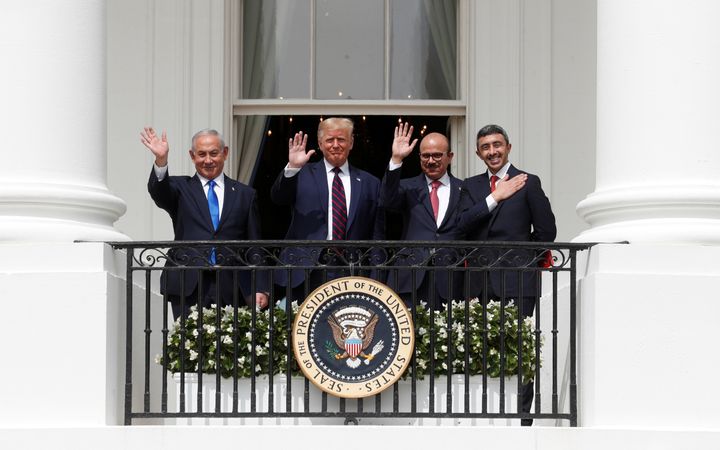 For Democrats, responding to this element of Trump’s reelection pitch is tricky. The president has tried to paint them as anti-Israel and even hateful toward Jews as some in the party have become more vocal in challenging the country’s policies and its hard-right prime minister, Benjamin Netanyahu. They also don’t want to appear to reject a development that policymakers from both parties have for decades described as a goal.

One option is to suggest that Trump’s approach is both largely about public relations and potentially dangerous.

“These accords are a good thing but they are also not peace deals,” said Ned Price, a former aide to President Barack Obama who now helps run a progressive advocacy group called National Security Action.

Neither Bahrain nor the UAE has ever actually fought Israel, and both nations have had quiet dealings with the country stretching back years. Meanwhile, both states are autocracies with violent tendencies: Bahrain is known for crushing homegrown dissent and the UAE has committed human rights abuses against its own citizens and people elsewhere in the region by intervening in Libya, Yemen, Egypt and elsewhere, often to support would-be authoritarians. The Trump administration has connected the U.A.E.’s so-called peace deal with Israel to a major arms sale to the Emiratis, and the president has greenlighted crackdowns in Bahrain, telling the tiny state’s dictator that he shouldn’t fear “strain” in his relationship with the U.S.

And the basic challenge to Israel’s standing in the Arab world ― its relationship with the Palestinians ― persists despite the Abraham Accords, which largely ignore that highly charged issue and Trump’s controversial, widely rejected plan for a future for Israel and Palestine. Simply dismissing the question underscores the impression that Americans and their Mideast partners are largely cynical, a view that’s helped fuel distrust and extremism, and that some form of future fighting is inevitable.

“The Trump administration has treated these agreements as if they existed in a vacuum and there is nothing that tethers to them to what is really the central challenge: the Israeli-Palestinian conflict,” Price said.

While Biden welcomed the deals, he has also spoken of a more even-handed approach to traditional U.S. mediation between the two sides to reestablish trust with Palestinian leaders who have felt sidelined by the Trump administration and to encourage Israel to make some concessions towards a future peace that includes a Palestinian state.

Trump and Pence seem likely to continue talking up the deals on the national stage. But for their GOP allies running for Congress and other positions, the issue doesn’t appear to have much value, said a person advising Democratic candidates who requested anonymity to speak frankly.

“I have actually been surprised that there hasn’t been more of an effort on the part of down-ballot Republicans to put an emphasis on this, because frankly President Trump doesn’t offer a whole lot … to tether themselves to when it comes to foreign policy and national security,” the source said.

“This is at least something, yet we’re still not hearing a lot about it. To me, that suggests that the political agenda and policy agenda is just consumed with [the pandemic]… or the effort to explain it is more burden than it’s worth.”

The HuffPost/YouGov poll consisted of 1,000 completed interviews conducted Sept. 21-24 among U.S. adults, using a sample selected from YouGov’s opt-in online panel to match the demographics and other characteristics of the adult U.S. population.

HuffPost has teamed up with YouGov to conduct daily opinion polls. You can learn more about this project and take part in YouGov’s nationally representative opinion polling. More details on the polls’ methodology are available here.