On Tuesday morning, in the wood-paneled conference room of the Knesset Law, Constitution and Justice Committee, Israeli politics pivoted in an unexpected direction.

Alternate Prime Minister Yair Lapid, waiting for his turn as prime minister in 2023, inexplicably surrendered a key piece of leverage over Prime Minister Naftali Bennett meant to ensure the rotation happens: a bill stipulating that neither man can serve in the cabinet of any new government established in the current Knesset.

The new Bennett-Lapid government is founded on the strange “parity” mechanism written into Israel’s Basic Laws last year by Benjamin Netanyahu and Benny Gantz: a government with two simultaneous leaders, each with a veto over the other and with sole control over half the cabinet. It was a mechanism born of Gantz’s deep distrust of Netanyahu’s intentions. Gantz could not be enticed to break away from his Blue and White alliance without ironclad guarantees that the rotation agreement promised by Netanyahu would be carried out.

Half a dozen amendments to Israel’s Basic Laws later, a new governance structure had come on the scene: the “parity” government, the “alternate prime minister,” and a weakened premier no longer fully in control of his or her government.

It was, Netanyahu crowed at the time, a “true unity government,” a government that must work together or not at all.

Then-prime minister Benjamin Netanyahu (R) and Defense Minister Benny Gantz face away from each other during the swearing in of the 24th Knesset. (Knesset Spokesperson’s Office)

Most Israelis now agree it ended up not working at all. From the start, Netanyahu sought to renege on his commitments. Since one of the few legal ways available to him to prevent Gantz’s November 2021 rotation as prime minister was to deny Israel a state budget law for 2020 and 2021, that’s what he did.

Even as Netanyahu personally managed some astounding successes in acquiring COVID vaccines and obtaining four peace agreements with Arab nations, the government as a whole stumbled at every turn. The school year opened in September 2020 with key budgets unapproved; pandemic closures were delayed; enforcement was lax among constituencies whose support Netanyahu needed, especially (but not only) the Haredi cities, and on and on it went.

The political class never seemed to step out of campaign mode. The rhetoric was at a constant fever pitch, month after month. All now understood that the “true unity government” was a ploy to shatter Blue and White after three indecisive elections and aim for a more successful fourth vote. But when that fourth vote came, Netanyahu found himself further from victory than before. 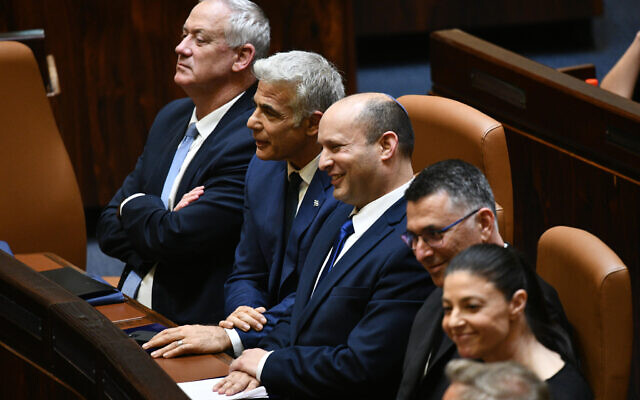 Last month, as they drew up the Yesh Atid-Yamina coalition agreement, Lapid and Bennett promised to “fill in the gaps” left in the parity rules that enabled Netanyahu to topple the last government.

One of those gap-filling measures, to be written into the Basic Law: The Government, said that neither prime minister, the sitting or the “alternate,” could serve in any other government during the term of the same Knesset.

Consider the scenario: It’s 2023. Bennett’s term as premier is drawing to a close. He suddenly faces a stark choice: Letting Lapid and the center-left take the helm of the country, as per the unity agreement, or turning to the right-wing opposition parties and offering to support a no-confidence vote in exchange for a plum appointment as defense minister in the new right-wing government.

It’s a tantalizing option Bennett might be hard-pressed to resist. It could help rebuild his credibility on the right. As a lifelong conservative and hawk, he may even believe it’s the right thing for the country.

But if you deny him the option of a cabinet post in that hypothetical right-wing government, a great deal of the attraction would be lost. If he helped topple the government before Lapid’s term begins, he’d sit out that next government as a backbencher, despised by both right and center-left. Better to simply stick to the deal and serve at Lapid’s side as defense minister and alternate prime minister. 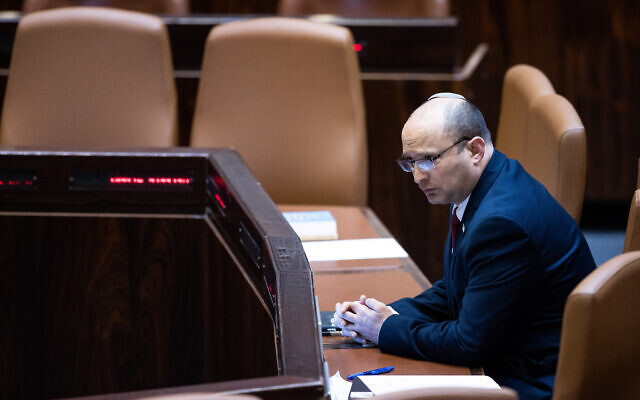 Prime Minister Naftali Bennett in the Knesset plenum for a special session in memory of Ze’ev Jabotinsky on July 13, 2021. (Yonatan Sindel/Flash90)

On Tuesday, as the Knesset Law Committee held a lawyerly debate on the new government’s proposed amendments to the Basic Law: The Government, specifically considering the precise standing and powers of the prime minister and his alternate in an interim cabinet should the government fall — lawmakers suddenly discovered that the restriction meant to hold Bennett to his word was excised from the government’s proposal.

Asked about the disappearance, Lapid’s office offered a laconic and telling answer to one news site: “We canceled the article because there’s trust there, and that’s more important than any article that might complicate things.”

The new government could not have been founded without Netanyahu’s “parity” mechanism. Bennett, leader of a six-seat faction, is only acceptable to the rest of his coalition because the post of prime minister is a far weaker one under the new system. The “alternate” prime minister’s power over his own half of the cabinet guarantees to the center-left vast independence, and thus allows for all the diverse opponents of the Netanyahu-led coalition to sit together.

It’s a bitter irony for Netanyahu. The institutions he established to outmaneuver Gantz laid the groundwork for his ouster. 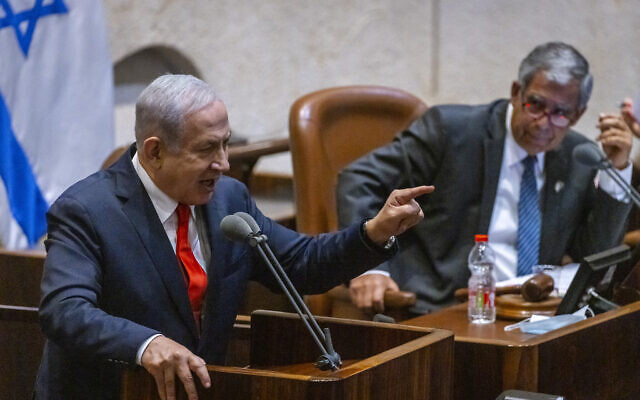 Yet that very failure holds three central lessons for the new government, lessons that Lapid and Bennett have apparently learned.

First, Netanyahu was felled by distrust. A long list of former right-wing confidants, aides and allies to Netanyahu are now mainstays of a coalition committed to his removal from politics. When asked why they oppose Netanyahu so vehemently, all say similar things: Netanyahu cheated them repeatedly, lied to them as a matter of course, and so can never again be trusted enough to negotiate with. As any game theory specialist can attest, trust matters. When you can’t trust a politician’s offer, that politician loses much of their leverage and maneuvering room at the negotiating table.

Second, trust can’t be legislated. As Netanyahu’s budget freeze showed, there’s always a workaround or loophole to any legal arrangement. After all, any opposition that might manage toward the end of Bennett’s term to cobble together a parliamentary majority for a new government, would by definition also have the votes to change the Basic Law back, allowing Bennett to serve as a cabinet minister after the new government’s formation.

Third, as Lapid’s office pointed out in its succinct statement, changes to constitutional orders “might complicate things.” Netanyahu thought his constitutional changes were charting a path to victory but discovered too late that they had only paved the way for his replacement. Electoral and constitutional systems are complex machines; it’s exceedingly hard to predict the knock-on effects throughout the system of a change. 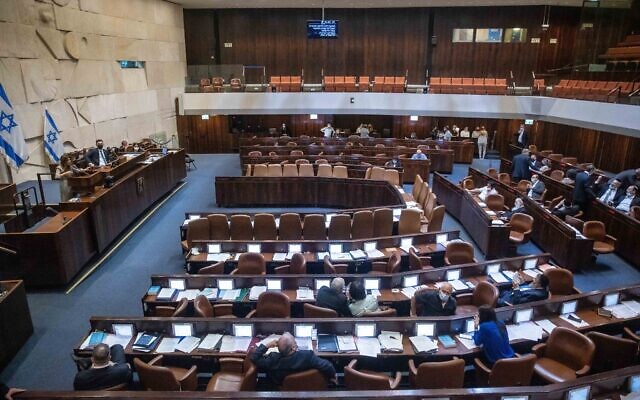 A plenary session at the Knesset in Jerusalem, July 14, 2021 (Yonatan Sindel/Flash90)

Falling back on trust

The Netanyahu-Gantz government wasn’t the first Israeli unity government to be undermined by betrayal and mistrust — there was Shimon Peres’s infamous “dirty trick” back in 1990 — but it was nevertheless the first unity government to legislate deep changes to Israel’s constitutional order to overcome that distrust, and to then watch the government fall apart in mutual recrimination despite that legislation. The Bennett-Lapid government was formed on the institutional and political foundations of its fallen predecessor. Netanyahu is, in a sense, living through the fallout of his betrayal of Gantz.

Whether Lapid or Bennett are honest men is irrelevant to the point being made here. As Bennett’s opponents have pointed out in a constant drumbeat since the new government’s formation, Bennett broke key election promises to form the new government.

But there’s a simple rule about honesty that usually holds in parliamentary politics. A politician may break their promises to voters, whether for personal convenience or for substantive policy reasons, but if they start breaking promises to coalition partners they’ll quickly find themselves without a coalition.

Netanyahu may be the most experienced and savvy political strategist of this generation. But all his cleverly woven stratagems failed the most basic test of politics. In his maneuvering, he lost the ability to reliably offer things at the negotiating table, and so lost his premiership. He now faces opponents who have learned from his experience that for political success there is no substitute, no clever legal construct or constitutional tweak, to simple trust.