The Tunisian migrant suspected of stabbing three people to death at a church in the French city of Nice had turned to religion recently after teenage years where he was arrested for violence and had used alcohol and drugs, his family said Friday.

Family members of Brahim Issaoui in Tunisia expressed dismay over the killings and asserted they are struggling to believe the 21-year-old carried out the attack. “It’s not normal,” said his brother Yassin.

“My brother is a friendly person and never showed extremism,” Yassin told Reuters. “He respected all other people and accepted their differences even since he was a child.”

Yassin, the brother of the Nice assailant Brahim Issaoui, shows his picture in front of the family home in the Tunisian city of Sfax, on October 30, 2020. (Photo by Fethi Belaid / AFP)

Born to a family of modest means in the central Tunisian city of Sfax, Issaoui had turned to religion and isolated himself in the past two years, his relatives told AFP.

“He prayed… (and) went from home to work and back, not mixing with others or leaving the house,” said his mother, crying as she clutched a passport photo of the young man in a white hoodie.

But before that “he drank alcohol and used drugs. I used to tell him, ‘we are poor and you’re wasting money?’ He would reply if God wills it, he will guide me to the right path, it’s my business’,” she added. 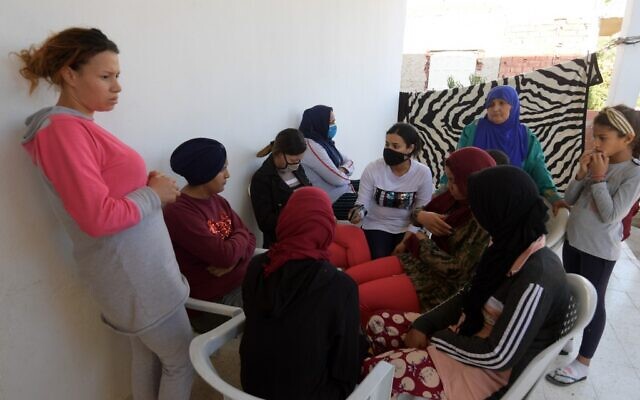 Sisters and relatives of the Nice assailant Brahim Issaoui, who killed three people and wounded several in the French city of Nice, gather at the family home on October 30, 2020 in the Tunisian city of Sfax. (Fethi Belaid / AFP)

But officials also noted that he had been arrested in his home country in 2016 for violence and using a knife. Mohsen Dali, an official in the Tunisian judiciary, did not provide additional information on the circumstances, but said he had not been flagged for “radicalism.”

Tunisia, where before a 2011 revolution, authorities controlled the practicing of religion and repressed dissent, saw a rise in radical Islam after the uprising and a wave of jihadist attacks in 2015.

In an interview broadcast Friday with Saudi-owned Al-Arabiya TV, Issaoui’s mother said she was surprised to hear he was in France when he called upon his arrival and had no idea what he was planning. “You don’t know the French language, you don’t know anyone there, you’re going to live alone there, why, why did you go there?” she said she told him over the phone.

One of 11 siblings, Issaoui lived with his parents in a modest house on a potholed road in a working-class neighborhood near an industrial zone on the outskirts of Sfax.

His mother said her son had dropped out of high school and had worked as a motorcycle mechanic. 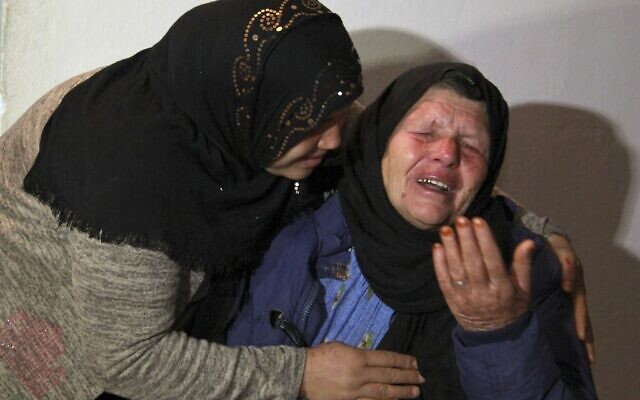 Kmar (R), mother of Nice assailant Brahim Issaoui, who killed three people and wounded several in the French city of Nice, cries at her home on October 29, 2020 in the Tunisian city of Sfax after being questioned by the anti-terrorism police. (HOUSSEM ZOUARI / AFP)

His brother told Al-Arabiya that Issaoui had informed the family he would sleep in front of the church, and sent them a photograph showing him at the cathedral where the attack took place.

France’s anti-terrorism prosecutor said the suspect is a Tunisian born in 1999 who reached the Italian island of Lampedusa, a key landing point for migrants crossing in boats from North Africa, on September 20. It is not clear when he arrived in Nice.

Tunisians fleeing a virus-battered economy make up the largest contingent of migrants landing in Italy this year. Italian media reported that from Lampedusa, where Issaoui was one of 1,300 arriving migrants on September 20, he was placed with 800 others on a virus quarantine boat in Puglia.

Italy’s interior minister confirmed Friday that the suspect was ordered to leave Italy on October 9. Minister Luciana Lamorgese did not give further details on what, if any action, was taken to ensure the man complied with the order, but said he was not flagged by either Tunisian authorities or intelligence agencies. 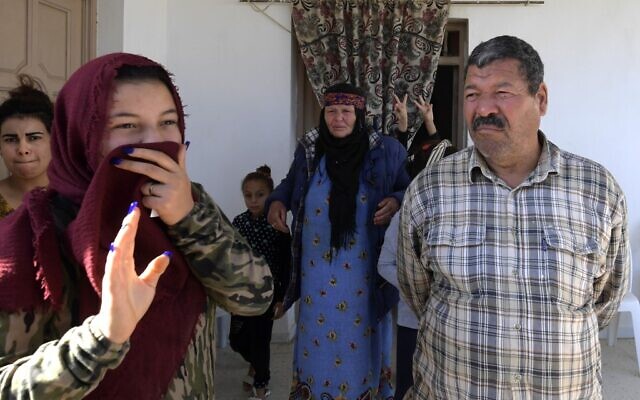 Mohammad, the father (R) Aida the sister and Kmar, the mother (C) of the Nice assailant Brahim Issaoui, are pictured at the family home in the Tunisian city of Sfax, on October 30, 2020. (Fethi Belaid / AFP)

Lamorgese called Thursday’s attack in France “an attack on Europe. Let’s not forget that Lampedusa, Italy is the gateway to Europe.”

Investigators on Friday also detained a second suspect in Thursday’s attack, a 47-year-old man who is believed to have been in contact with the assailant the night before, according to a judicial official who was not authorized to be publicly named.

Tunisian anti-terrorism authorities also opened an investigation Friday into an online claim of responsibility by a person who said the attack on the Notre Dame Basilica in Nice was staged by a heretofore-unknown Tunisian extremist group.

A substitute prosecutor at the Tunisian anti-terrorism prosecutor’s office, Mohsen Dali, told The Associated Press that the claim of responsibility came in an online post saying the attack was staged by a group called Al Mehdi of Southern Tunisia, previously unknown to Tunisian authorities. 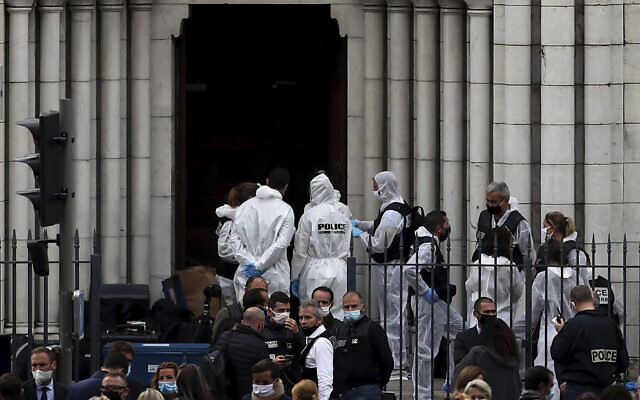 French policemen and forensic officers work on the scene of the knife attack in front of Notre Dame church, in Nice, France, October 29, 2020. (Daniel Cole/AP)

From Jerusalem to Pakistan to Russia and Lebanon, Muslims offended by the caricatures of the Prophet Muhammad and French President Emmanuel Macron’s firm stance against political Islam held more anti-French protests Friday. Macron’s government stood firm, and called up thousands of reserve soldiers to protect France and reinforce security at French sites abroad.

The attack was the third in less than two months that French authorities have attributed to Muslim extremists, including the beheading of a teacher who had shown caricatures of the Prophet Muhammad in class after the images were re-published by satirical newspaper Charlie Hebdo.

The images deeply offended many Muslims, and protesters burned French flags, stomped on portraits of Macron or called for boycotts of French products at demonstrations Friday in several countries.

Government ministers said Friday that 3,500 reserve soldiers will join thousands of others protecting schools and religious sites. Schools remain open during a nationwide lockdown that started Friday to stem the spread of the virus, but religious services are canceled — except for this Sunday for All Saint’s Day. 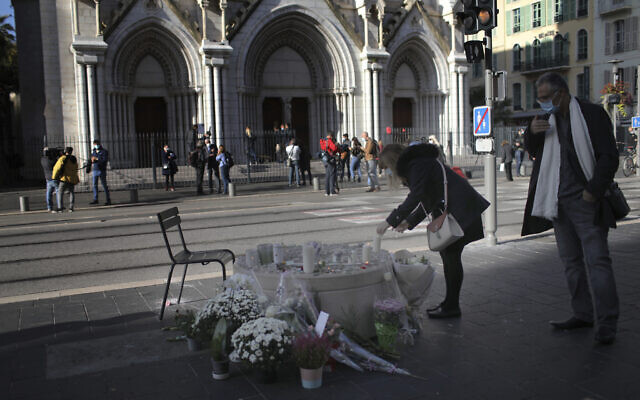 France’s interior minister said Friday that the country is “at war” with Islamist extremists, and the conservative lawmaker for the Nice region, Eric Ciotti, called for a “French-style Guantanamo” to lock up terrorist suspects.

Many French Muslims denounced the killings, while warning against stigmatizing the country’s peaceful Muslim majority.

Nice imam Otmane Aissaoui decried a “terrible act of terror, of savagery, of human insanity that plunges us into sadness, shock and pain” — and once again puts French Muslims in the spotlight.

The attacker “hit brothers and sisters who were praying to their lord,” he told The Associated Press. “It’s as if a mosque was touched … I am deeply Christian today.”