TUNIS, Tunisia (AFP) — Tunisian President Kais Saied sacked the defense minister Monday, a day after ousting the prime minister and suspending parliament, plunging the young democracy into a constitutional crisis in the midst of a pandemic.

Saied declared on Sunday that he had “taken the necessary decisions to save Tunisia, the state and the Tunisian people,” following street protests in multiple cities against the government’s handling of the Covid pandemic in the North African country.

The president, who under the constitution controls the armed forces, warned his opponents against taking up arms, threatening that if anyone “fires a single bullet, our forces will respond with a rain of bullets.”

Soldiers from early Monday blockaded the assembly in Tunis while Saied backers hurled stones, bottles and insults at supporters of the Islamist-inspired Ennahdha, whose leader was barred entry to the complex.

Troops also surrounded the office of Mechichi, who was yet to officially react to the events.

Later in the afternoon, the protests died down, with the presidency ordering an overnight curfew.

Demonstrators celebrate with national Tunisian flags during a rally after the president suspended the legislature and fired the prime minister in Tunis, Tunisia, July 25, 2021. (AP Photo/Hedi Azouz)

Saied’s dramatic move — a decade on from Tunisia’s 2011 revolution, often held up as the Arab Spring’s sole success story — comes even though the constitution enshrines a parliamentary democracy.

The United States on Monday voiced alarm and called on the birthplace of the Arab Spring to adhere to “democratic principles,” while the European Union appealed to people to respect the “rule of law” and to “avoid any resort to violence.”

France urged a speedy return to “normal functioning” of the government, Russia said it was monitoring the situation, while Turkey, where the government supports Ennahdha, called for “democratic legitimacy” to be restored.

The crisis follows months of deadlock between the president, the premier and Ennahdha chief Rached Ghannouchi, which has crippled the COVID response, as deaths have surged to one of the world’s highest per-capita rates. 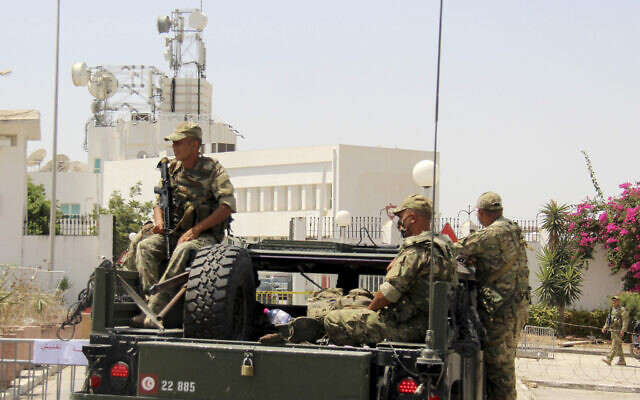 More than 18,000 people have died of coronavirus in a nation of 12 million.

Police also shuttered the local bureau of Qatari-based Al Jazeera television, the network’s Tunis director Lotfi Hajji said, warning that “what is happening is very dangerous, it is proof that freedom of the press is threatened.”

The powerful Tunisian General Labour Union (UGTT) which played a key role in the 2011 uprising, said the president acted “in accordance” with the constitution to “prevent imminent danger and to restore the normal functioning” of the state.

Saied’s power-grab sparked jubilant rallies late Sunday by supporters who flooded the streets of Tunis, waving the national flag and sounding their car horns as fireworks lit up the sky.

Since Saied was elected in 2019, he has been locked in a showdown with Mechichi and Ghannouchi, who is also house speaker.

The rivalry has blocked ministerial appointments and diverted resources from tackling Tunisia’s many economic and social problems. 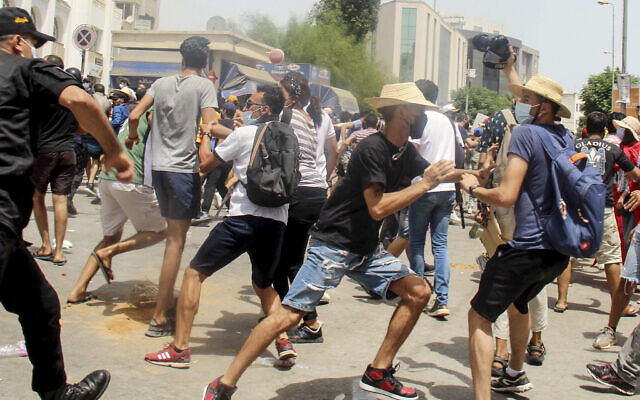 Among chaotic scenes outside parliament Monday, Ghannouchi admonished an army officer who was blocking access and who had declared the troops were “the protectors of the nation.”

Ghannouchi retorted that “the Tunisian people will never accept an authoritarian government, whatever your efforts.”

Saied said he would assume executive power “with the help” of a government whose new chief he would appoint himself.

‘Birth of a dictator’

Some have lasted just months, hindering the reforms needed to revamp the country’s struggling economy and poor public services.

Sunday’s drama began with mass protests against the government for its failures in tackling the pandemic. 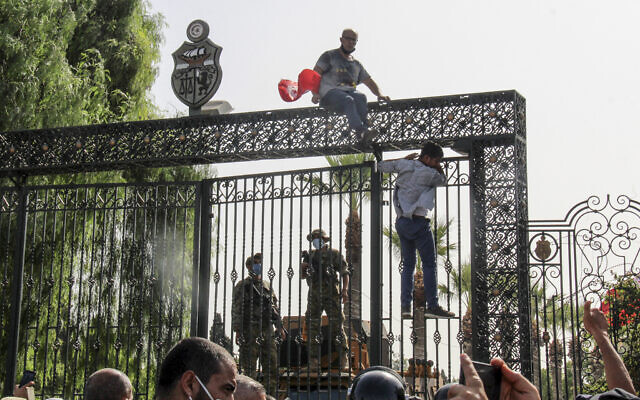 Tunisian soldiers guard the main entrance of the parliament as demonstrators gather outside the the gate in Tunis, Tunisia, July 26, 2021. (AP Photo/Hedi Azouz)

A senior Ennahdha official, speaking to AFP on condition of anonymity, alleged that the protests and subsequent celebrations were choreographed by Saied.

“This is the president we love!” she said.

But one man in his 40s looked on without enthusiasm.

“These fools are celebrating the birth of a new dictator,” he said.