Turkey will continue its efforts against Israeli Prime Minister Benjamin Netanyahu, who has never been “any friend of ours,” the nation’s president said on May 19.

Speaking at an event in the capital Ankara to mark May 19 Commemoration of Atatürk, Youth and Sports Day, Recep Tayyip Erdoğan recounted his 2009 public scolding of Israel‘s then-President Shimon Peres, an incident which was captured on video and brought Erdogan greater international prominence.

At that year’s World Economic Forum in Davos, Switzerland, Erdoğan walked off stage after criticizing Peres over Israel’s military offensive in Gaza, just as he blasts Israel’s current attacks on Palestinians in Gaza, launched by Netanyahu.

As of Wednesday at least 227 Palestinians have been killed, including 64 children and 38 women, in Israeli attacks on the Gaza Strip since May 10, according to the Gaza-based Health Ministry.

Speaking to young people at the National Presidential Library, Erdoğan hinted at “good news” on oil and natural gas coming from the Eastern Mediterranean, harking back to a similar announcement of a Black Sea gas find in August 2019.

Erdogan also said that on a July 20 visit to the Turkish Republic of Northern Cyprus, he will give “essential messages” to the whole world.

“If you cannot put forward this determination, this stance, nobody will square accounts with you,” he said.

Humanity is being killed in Gaza, Palestine: Erdoğan 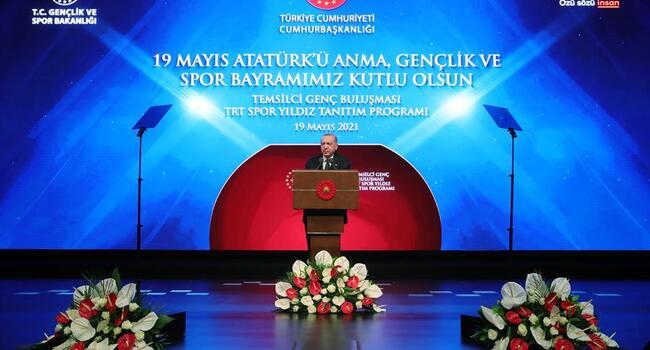