As Turkish fire crews pressed ahead Tuesday with their weeklong battle against blazes tearing through forests and villages on the country’s southern coast, President Recep Tayyip Erdogan’s government faced increased criticism over its apparent poor response and inadequate preparedness for large-scale wildfires.

Fed by strong winds and scorching temperatures, the fires that began Wednesday have left eight people dead and forced thousands of residents and tourists to flee homes or vacation resorts in boats or convoys of cars and trucks. Charred and blackened trees have replaced some of the pine-coated hills in Turkey’s Turquoise Coast while many villagers lost homes and livestock.

Firefighters on Tuesday were still tackling 11 fires in six provinces, including the coastal provinces of Antalya and Mugla that are popular tourist destinations. More than 150 fires that broke out in over 30 provinces since Wednesday have been put out, officials said.

A senior Turkish forestry official described the wildfires as the worst in Turkey in living memory, though he could not say how many acres of forest land the fires had devoured. He also could not estimate how long it would take the crews to put the fires out, saying strong winds were reigniting flames that had previously been brought under control. The official spoke on condition of anonymity in line with government regulations.

As residents lost homes and livestock, anger turned toward the government, which admitted that it did not have a usable firefighting aircraft fleet. Opposition parties accused the government of failing to procure firefighting planes and instead spending money for construction projects that they say are harmful the environment.

In the village of Bozalan, in Mugla province, where homes and olive trees were incinerated, residents complained that the government’s response was inadequate. 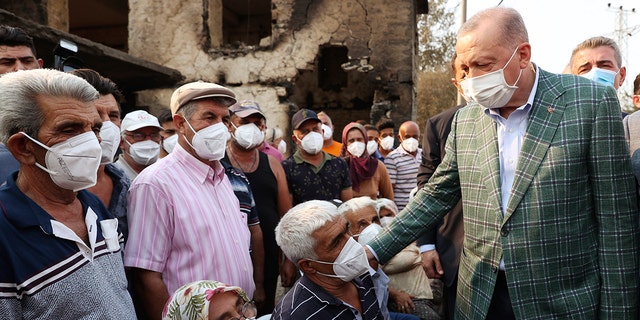 “Our fire-extinguishing helicopters were insufficient,” said 58-year-old Mahmut Sanli. “If there was a firefighting crew in our neighborhood, this wouldn’t have happened.”

Nevzat Yildirim, 30, said he had called authorities in Mugla pleading for help but “nothing came.”

“We tried to protect our own homes through our own means, by filling up buckets. We organized ourselves with neighbors, youths and saved our homes,” he said.

In the nearby village of Cokertme, Gulseli Karaduman was seen using a fire extinguisher to save her olive trees.

“There has been no air support, nothing. For three days we’ve been living with this helplessness,” she said.

“We need to start preparing our country for new climate crises immediately. Our country is in the midst of a climate and water crisis,” he said.

Erdogan’s government has also been accused of compromising firefighting efforts by allegedly refusing help from Western nations during the early stages of the fires. But official said the government had only refused offers for small water-dumping planes. 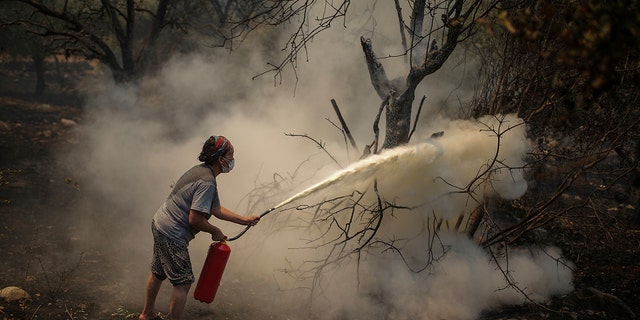 A woman uses a fire extinguisher to save a burning tree in Cokertme village, near Bodrum, Mugla, Turkey, Tuesday, Aug. 3, 2021.
(AP Photo/Emre Tazegul)

Foreign Minister Mevlut Cavusoglu said Tuesday that Turkey accepted all offers meeting its needs. France and Greece also offered to send fire-dumping planes but were later forced to retract them due to fires there, he said.

The Israeli Embassy, however, said Tuesday that Israel had offered to help but Turkish officials had refused the offer, saying the “situation is under control.” It said the offer still stands.

Mayors posted videos pleading for aerial firefighting responses to local wildfires while celebrities joined a social media campaign requesting foreign help to combat the blazes. The campaign drew an angry response from a top Erdogan aide, Fahrettin Altun, who said “Our Turkey is strong. Our state is standing strong.”

Erdogan himself was accused of insensitivity after he threw bags of tea at residents from a bus during a weekend visit to the fire-hit Antalya region.

Planes sent from Spain and Croatia joined aircraft from Russia, Iran, Ukraine and Azerbaijan on Tuesday. A total of 16 planes, 51 helicopters and more than 5,000 personnel were tackling the fires.

On Tuesday, officials evacuated residents from dozens of holiday homes as blazes advanced toward the Turkevleri region, near the town of Milas, in Mugla province.

Authorities have launched investigations into the cause of the fires, including possible sabotage by Kurdish militants. A 16-year-old was detained on Tuesday in connection to a blaze that started in Antalya’s Manavgat region on Wednesday, pro-government Sabah newspaper reported. 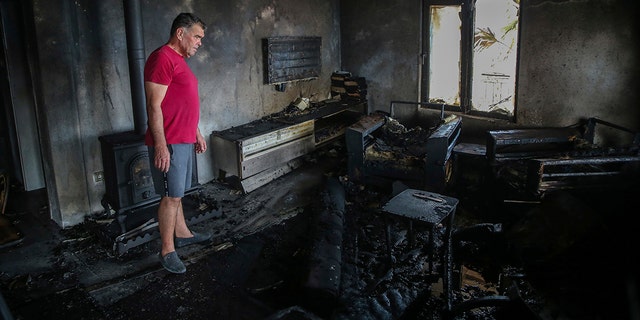 A man stands inside his burnt out house in Cokertme village, near Bodrum, Mugla, Turkey, Tuesday, Aug. 3, 2021.
(AP Photo/Emre Tazegul)

Experts, however, mostly point to climate change as the culprit, along with accidents caused by people.

A heat wave across southern Europe, fed by hot air from North Africa, has led to wildfires across the Mediterranean, including in Italy and Greece.

The Turkish meteorology authority warned that temperatures would rise between 4 and 8 degrees Celsius above seasonal norms around the country’s Aegean and Mediterranean coasts.

In Greece, thousands of people fled their homes north of Athens in cars and on motorcycles as a wildfire broke out of the forest and reached residential areas. The blaze sent a huge cloud of smoke over Athens and prompted multiple evacuations near Tatoi, 12 1/2 miles to the north.

The mayor of Altamura, near the southern Italian city of Bari, advised residents to keep windows closed after a fire broke out in a plastics factory warehouse. A helicopter was dispatched near the city of Pescara in Abruzzo to prevent a wildfire from reaching a gasoline depot, while industrial production sites were under threat in the region’s foothills.

Italian firefighters have battled more than 37,000 fires since June 15, an 76% increase over last year, when nearly 155,000 acres were destroyed, according to the Corriere della Sera newspaper.