In the wake of rioting and unrest that swept a number of mixed Jewish-Arab cities last month, Police Commissioner Kobi Shabtai has approved the use of a controversial form of live ammunition as a crowd-control method within Israel, Kan news reported Sunday.

According to the report, Shabtai approved the use of low-caliber Ruger rounds, a type of munition normally used for riot dispersal in the West Bank and East Jerusalem as it is considered less lethal than the larger caliber rounds typically used by the military.

However, such rounds can kill, especially if used incorrectly. The use of the controversial rifle has been cited as a cause of death for Palestinians in clashes with Israeli troops.

The decision by police was apparently a formalization of a policy that had already been in effect. Police used Ruger rifles during the riots last month on at least one occasion, shooting a man in the legs as he tried to throw a firebomb toward a municipal hall in Lod.

However until now, the munition had officially been used as a riot-dispersal method only in the West Bank, as well as in East Jerusalem where it was used during a period of violent clashes in the fall of 2015.

The report said that police stationed near the controversial nationalist flag march through Jerusalem’s Old City last week had been armed with Ruger rounds amid concerns of violence.

According to Kan, use of the rifle by officers in the field will necessitate approval by high-ranking officers.

Police did not immediately respond to a request for comment on the report.

According to Kan, Shabtai also approved the use of drones that disperse tear gas as a crowd-control method and said that the use of batons would now be left to the discretion of individual police officers rather than senior officers.

Also on Sunday, Shabtai submitted a preliminary report to Public Security Minister Omer Barlev on the violence between police and residents on Saturday in the northern Arab town of Deir al-Asad that left one man seriously injured and four officers lightly hurt.

The clashes occurred after officers responded to reports of gunfire during a wedding in the northern Arab town of Deir al-Asad. Celebratory gunfire is a common phenomenon at some celebrations in the Arab community. 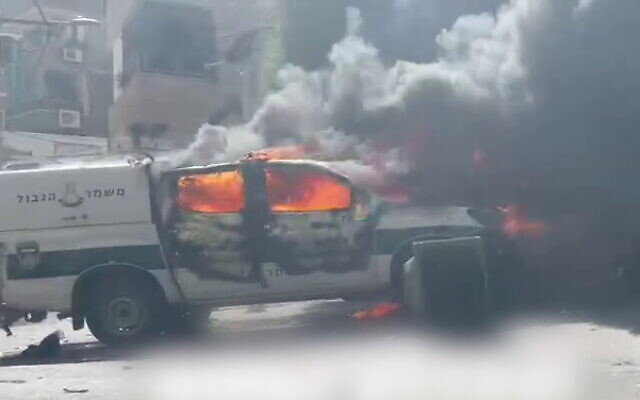 Two police cars are set on fire in the town of Deir al-Asad in northern Israel amid a clash between residents and officers, on June 19, 2021 (Screenshot/Twitter)

According to Kan, Shabtai’s report said that officers only understood that the shooting was at a wedding when they arrived on the scene and that they fired into the air because they felt that their lives were in danger.

A 43-year-old local resident was shot and seriously injured. Local witnesses claimed the man, Muhammad Amar, was shot by police.

Four police officers were lightly wounded, one of them hit by a rock thrown from a building, and two police cars were set alight amid the clash.