The judiciary said in a statement that Tal’s funeral would begin at 6 p.m. Tuesday in Jerusalem’s Givat Shaul neighborhood.

Born to a Hasidic family in Poland in 1927, Tal’s family moved to Israel when he was eight years old. He studied at the Bnei Akiva yeshiva in Kfar Haroeh before joining the Haganah paramilitary group and later the Israel Defense Forces.

After completing his law studies at Hebrew University in 1953, Tal worked as a lawyer until 1978, when he was appointed a Jerusalem District Court judge.

There, he was on the panel of judges that in 1988 convicted Demjanjuk of committing war crimes as a guard in the Treblinka death camp during the Holocaust, and sentenced him to death. The conviction was overturned by the Supreme Court five years later, after new evidence cast doubt on Demjanjuk’s identification as Treblinka’s “Ivan the Terrible.”

Later, Tal said that he was “100 percent sure” that the identification had been correct, but added that even Nazi criminals deserve a high-quality legal defense.

“Even if the devil stands trial, the devil needs the best defense attorney, and if they don’t have adequate defense there will be no trial,” he said.

Tal also presided over cases regarding Reform conversion and the opening of a Jerusalem main street going through Haredi neighborhoods on Shabbat.

He convicted nuclear spy Mordechai Vanunu of espionage and treason in 1988, but wrote later in his memoir that the state had gone too far in barring from publication details of the trial and in keeping Vanunu in solitary confinement for a long time.

He became a Supreme Court justice in 1994 and served there for three years until his retirement at age 70.

As the only religious and conservative justice during those years, Tal frequently found himself in the minority. He was the only judge to oppose Alice Miller’s right as a woman to participate in the Israeli Air Force flight course (he later said that he might have ruled differently in today’s atmosphere), and the only judge to oppose the incitement to racism conviction of a man who wrote an article supporting Baruch Goldstein, who massacred 29 Palestinians in Hebron.

He later criticized the Supreme Court for not being sufficiently diverse, having just one religious justice, one of Mizrahi descent and one Arab for decades: “As long as it’s just one chair you can say it’s a fig leaf. I’m looking for more diversity so that there are many fig leaves.”

In 1999, Tal was appointed head of an eponymous committee that formulated recommendations to the Knesset, which resulted in the so-called Tal Law regulating a delay in army service for Haredi yeshiva students — a highly contentious issue in the ultra-Orthodox community, where many oppose serving in the IDF. 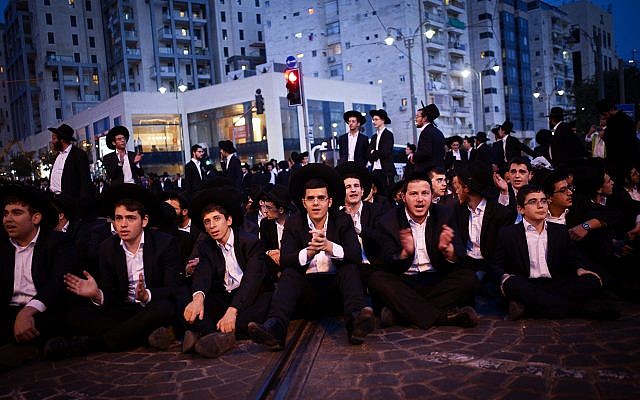 Ultra-Orthodox demonstrators block a road as they protest against the arrest of an army draft-dodger in Jerusalem, November 28, 2018. (Aharon Krohn/Flash90)

The law for the first time required yeshiva students who wanted to work to first serve a shortened period of time in the army or in national service. However, the High Court of Justice nullified the law in 2012, arguing that it didn’t uphold the principle of equality.

“What people don’t understand is that you can’t achieve complete equality in any community at once,” Tal told the Haaretz daily in 2006. “There is inequality between different communities — minorities, handicapped, women. Equality is a very important value, but sometimes the path to it is full of bumps that take time [to overcome]. It is better to achieve limited equality, aiming for the inequality to be reduced over time.”

In 2005, Tal was a fierce critic of the plan to evacuate all settlements in the Gaza Strip, and slammed the High Court for rejecting petitions against it.

“This is simply an injustice, uprooting people from their homes,” he said at the time, adding that had he been a soldier, he would have refuse the evacuation order. “The Supreme Court didn’t act reasonably. It definitely disappointed me. I don’t know how the justices explain that to themselves.”

Tal was married to Chana and they had six children, one of whom died in the Yom Kippur War in 1973.