British Secretary of State for Education Gavin Williamson wrote to principals on Friday, warning them that they must take action amid a rising number of cases of antisemitism in schools.

“Antisemitism is racism. It is abhorrent and, like other forms of racism, has no place in our schools,” the letter read.

“I would also take this opportunity to remind schools of their legal duties regarding political impartiality,” Williamson wrote. “When political issues are brought to the attention of pupils, including by the activity and expression of other pupils, where this comes to the attention of the school, schools should offer pupils a balanced presentation of opposing views.”

The minister said that schools should avoid presenting information in a “politically biased or one-sided way and should always avoid working with organizations that promote antisemitic or discriminatory views.”

Illustrative — Protesters hold flags in London, May 22, 2021, as they take part in a rally pro-Palestinian rally (AP Photo/Alastair Grant)

Williamson also said that “schools should not work with or use materials from organizations that publicly reject Israel’s right to exist.”

The letter came amid a rise in antisemitic incidents in the UK, including in schools, during and since the recent conflict between Israel and the Gaza terror groups.

The Guardian reported there have been pro-Palestinian protests in some British schools and controversy over the response by teaching staff.

Some students have been accused of antisemitism while one principal described the Palestinian flag as a “call to arms.”

As in previous rounds of Israeli military conflicts involving Palestinians over the past 20 years, antisemitic violence and intimidation have surged in Europe, where tens of thousands of protesters have marched and rallied at events that expressed rage toward Israel. Some have used the moment as a pretext to target Jewish people. 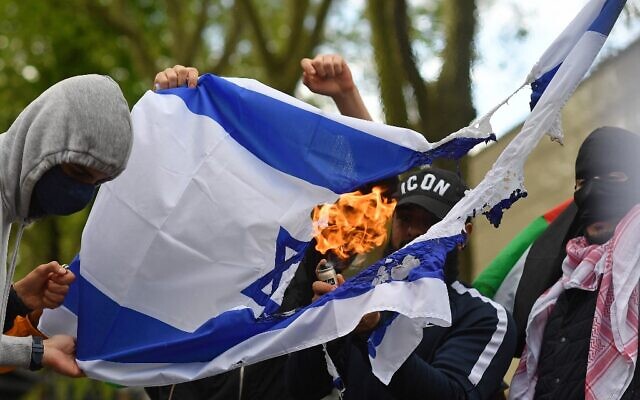 Pro-Palestinian activists and supporters burn an Israeli flag as they demonstrate in support of the Palestinian cause outside the Israeli Embassy in central London on May 22, 2021. (JUSTIN TALLIS / AFP)

A Tuesday report said that in the UK, 116 antisemitic incidents were reported since May 9, the day before Hamas started launching rockets into Israeli cities, compared to only 11 cases in the previous two weeks.

In one incident on May 16, a rabbi was beaten by two young men who hurled antisemitic slurs during the attack. The rabbi, Rafi Goodwin, sustained moderate injuries that required hospitalization. Police arrested the alleged assailants, who also are accused of stealing Goodwin’s phone.

Last Friday, after the ceasefire, a man broke into the car of an Orthodox Jewish man in a heavily Jewish part of London and assaulted him. The suspect was detained by passersby until police took him into custody, the London Jewish News reported.

Officers were investigating a video circulating on social media, in which “F*** their mothers, rape their daughters” can be heard being shouted from a car in north London. The car was traveling in a convoy of vehicles decorated with Palestinian flags. 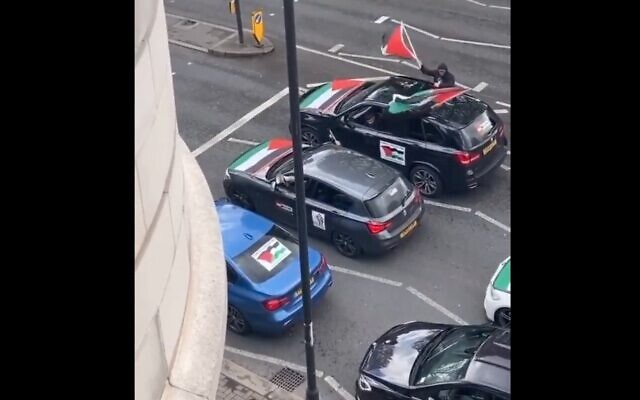 A convoy of cars filmed on London’s Finchley Road, with passengers yelling antisemitic obscenities, May 16, 2021. (Screenshot)

In the wake of the video, police in London said they would up their presence in Jewish neighborhoods in the capital.