Britain’s main opposition Labour party was in turmoil on Friday, a day after it suspended its former leader Jeremy Corbyn following his response to a damning government watchdog report that said the party had broken equality laws in its handling of anti-Semitism complaints.

After the decision to suspend Corbyn, the former leader’s allies lined up behind his vow to “strongly contest” the “political” move, as senior Labour figures rallied around new chairman Kier Starmer.

Speaking Friday morning, Starmer said: “I don’t want a split in the Labour Party. I stood as leader of the Labour Party on the basis I would unite the party, but also that I would tackle anti-Semitism.”

Responding to The Equality and Human Rights Commission (EHRC) investigation — which found there were “serious failings” by the party’s leadership when it came to anti-Semitism, and that Labour had “inadequate processes” for handling complaints — Corbyn on Thursday said he didn’t accept all of its findings and asserted that “the scale of the problem was also dramatically overstated for political reasons by our opponents inside and outside the party, as well as by much of the media.”

Labour then said that it was kicking Corbyn out “in light of his comments made today and his failure to retract them subsequently.”

Moments after Corbyn’s statement was released, Starmer, speaking at a press conference, said those who “pretend [anti-Semitism] is exaggerated or factional are part of the problem.” Starmer said the report marked a “day of shame” for the party.

The UK’s Guardian newspaper reported Friday that Starmer and the new Labour leadership was shocked at Corbyn’s rejection of the report and the suggestion that Starmer was somehow behind it.

“It was total disbelief that he would put that out,” one senior adviser was quoted by the daily as saying.

In an interview released after his suspension, Corbyn refused to retract his earlier statements, saying the “public perception” of Labour’s anti-Semitism problem was “very different” from the reality.

Vowing not to back down, he urged his followers to “stay in the party” to fight for left-wing principles.

Speaking to The Telegraph newspaper, a senior Corbyn ally warned that Starmer was now facing a “critical 24-hour period” to save the party from splitting.

“This was a disastrous miscalculation,” the source was quoted as saying. “It could now escalate. He doesn’t understand the scale of what is about to happen, and it’s going to get very difficult for him. Jeremy has an army behind him and a lot of legal funding.”

Part of that funding may come from a crowdfund set up to help with Corbyn’s legal costs should he face defamation action. The fund was set up by Carole Morgan, from Ryde in South East England, to let the former Labour leader know his supporters have “not forgotten him.” 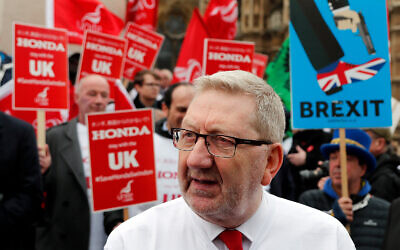 Meanwhile, Len McCluskey, leader of the Unite union, Labour’s single biggest donor, called Corbyn’s suspension a “grave injustice” and said it would “create chaos” within the party while compromising its chances of a general election victory.

“A split party will be doomed to defeat,” he warned in a statement.

Dave Ward, head of the Communications Workers’ Union, said the suspension was “fundamentally wrong and needs to change.”

In a call to oppose the move, the grassroots pro-Corbyn group Momentum described the suspension as “a massive attack on the left by the new leadership and should be immediately lifted in the interests of party unity.” 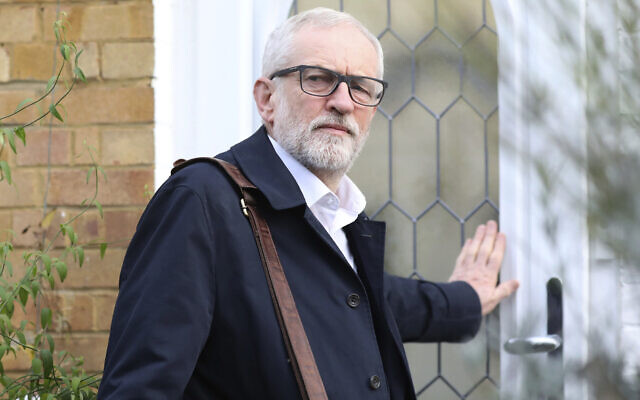 The UK government investigation found that equality laws were broken by Labour under Corbyn and the party was “responsible for unlawful acts of harassment and discrimination.” The watchdog found the party responsible for unlawful acts in three major areas: political interference in anti-Semitism complaints, failing to provide adequate training to those handling anti-Semitism complaints, and harassment.

There were 23 instances of “inappropriate involvement” by Corbyn’s office and others in the 70 files examined in the report, the EHRC said, with interference happening more frequently in complaints of anti-Semitism than in other discrimination allegations.

The report by the state anti-racism watchdog came at the end of a year-long probe into allegations of anti-Semitism in the party.

Corbyn had vowed to punish any party member caught making racist statements, yet he defended a number of members who made vitriolic anti-Semitic remarks, and expelled hardly any members despite more than 850 formal complaints.

Corbyn himself drew wide criticism for his own actions. Last year he expressed regret for having defended a 2012 anti-Semitic mural in London’s East End. The mural, named Freedom of Humanity, was painted on a property near Brick Lane by the Los Angeles-based graffiti artist Kalen Ockerman. It depicted a group of men — seemingly caricatures of Jewish bankers and businessmen — counting their money on a Monopoly board balanced on the backs of naked workers.

In parliament, the Socialist Campaign Group of left-wing MPs, led by former shadow justice secretary Richard Burgon, condemned Labour’s suspension of Corbyn, saying: ‘We will work tirelessly for his reinstatement. The fight against anti-Semitism and all forms of racism is central to the struggle for a society based on justice and equality.” 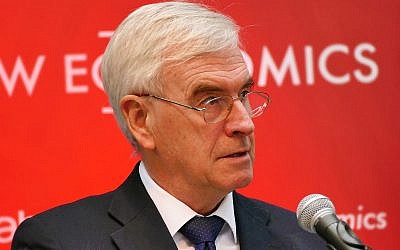 And John McDonnell, Corbyn’s former No. 2 and the former shadow chancellor, said the move was “profoundly wrong.”

“On the day we should all be moving forward and taking all steps to fight anti-Semitism, the suspension of Jeremy Corbyn is profoundly wrong,” he tweeted. “In interests of party unity, let’s find a way of undoing and resolving this. I urge all party members to stay calm as that is the best way to support Jeremy and each other. Let’s all call upon the leadership to lift this suspension.”

The Guardian, however, quoted sources in Labour’s leadership that said while the move was harsh, it was correct and was broadly supported within the party.

One shadow cabinet minister was quoted as saying, “I hadn’t expected Keir to be so strong in criticizing those who deny anti-Semitism. It was the obvious clap line for those in the party have been worried about the issue. Once he’d said that, the party had little choice but to act.”

Another senior Labour MP told The Guardian that Corbyn’s suspension had been inevitable given his response to the report: “Jeremy showed absolutely no contrition or acknowledgement of his role and the role of his staff and supporters in causing this tidal wave of anti-Semitism. Keir had no option. The bit where Jeremy says the problem was overstated for political reasons is just echoing anti-Semitic conspiracy theories.” 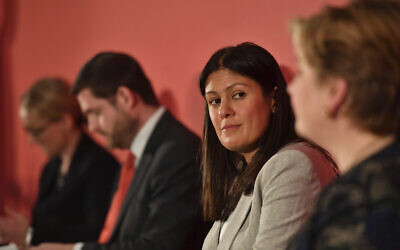 Candidates for leadership of Britain’s Labour Party, with from right, Emily Thornberry, Lisa Nandy, Jim McMahon who is attending in place for candidate Kier Starmer, and Rebecca Long-Bailey, during the Labour leadership hustings in Nottingham, England, Saturday February 8, 2020. (Jacob King/PA via AP)

Lisa Nandy, the shadow foreign secretary, told the paper that the decision was not taken lightly. “It was not a decision anyone took any pleasure in, least of all Keir. I could not see any other reaction other than absolutely sadness.”

But she added that the party would be monitoring Labour members’ and officials’ social media accounts over the coming days and would take action against any further anti-Semitism.

“We will proactively investigate, we will not be passive about this, racism is a cancer, it is a poison,” Nandy said. “Once it is allowed to enter an institution, it poisons everything that it touches, and so we are going to be proactive about this.”

Deputy Labour leader Angela Rayner told the BBC: ‘I’m devastated that it’s come to this. Today should be about really listening, and reading the report and taking in the report.”

A snap YouGov poll found that 58 percent of people in the UK believe Corbyn’s suspension was the right decision, against 13% who said it was wrong.