Updated guidelines issued by the United Kingdom on Thursday declared that travelers from Israel will no longer have to quarantine upon arrival in the UK.

However, the guidelines differentiated between Israel and Jerusalem, though there was no difference in terms of policy.

The policy had a separate explainer, noting that the United Kingdom does not recognize Israeli sovereignty over Jerusalem, but recognizes Israel’s de facto authority over West Jerusalem while regarding East Jerusalem as under Israeli occupation.

The Conservative Friends of Israel, a pro-Israel group in the ruling party, on Friday issued a statement calling on the British Foreign, Commonwealth and Development Office (FCDO) to “immediately correct” its “offensive and hostile” separation of Jerusalem from Israel in the travel advisory.

“The announcement of a travel corridor with Israel is excellent news. However, the FCDO’s decision to define Jerusalem as a territory separate from Israel is offensive and hostile. Jerusalem is the capital of Israel,” the organization said in a statement. “To describe Jerusalem as anything other than an integral part of Israel is a fiction divorced from reality and the travel advice must be immediately corrected.”

Britain was one of 128 countries that voted in 2017 in favor of a United Nations resolution condemning the United States’ recognition of Jerusalem as Israel’s capital and calling on countries not to move their diplomatic missions to the city.

The United Kingdom has repeatedly said it will withhold recognition of sovereignty over Jerusalem until there is a final determination of its status.

Israel’s COVID-19 morbidity has dropped considerably since September highs that saw thousands of new cases diagnosed every day, following a second national lockdown, though health officials have warned in recent days that illness rates may once again be tilting upwards. 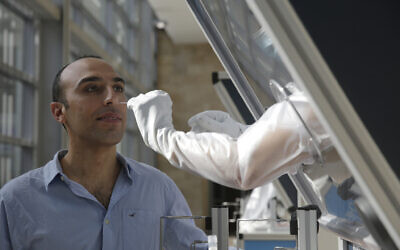 A technician demonstrates on an airport staffer how samples are taken, at a new on-site COVID-19 testing facility at Ben Gurion International Airport, November 9, 2020. (Maya Alleruzzo/AP)

Meanwhile, Israel still deems the UK a “red country,” requiring Israeli arrivals from there to self-isolate for two weeks upon arrival.

The UK’s Foreign Office said the West Bank and Gaza remain on its list of territories from which quarantine is required upon arrival.

On Wednesday, the Interior Ministry agreed to ease coronavirus restrictions and allow entry into the country for first-degree relatives of new immigrants who have come to Israel within the last four years.

Currently, only Israelis and foreigners with a residency visa are allowed to fly into the country. Those landing from so-called “red countries” — those with high coronavirus rates — must observe a 14-day quarantine.

Additionally, a limited class of non-citizens, primarily first-degree family members, are allowed into Israel for lifecycle events such as births and weddings, with each case evaluated individually by the Interior Ministry.