During an initial arrest raid, one group of officers was trapped in a building after local residents barricaded them inside with chains. A suspect wanted by police tried to evade arrest the next day by dressing as a woman.

Police arrived with court-ordered arrest warrants for several suspects as part of an ongoing investigation, the force said in a statement Tuesday. The suspects were wanted for a spate of recent violent protests against a new route of the Jerusalem Light Rail that passes through an ultra-Orthodox neighborhood, Hebrew media reported.

As officers moved in to make the arrests, they were met with violent opposition by local residents who pelted them with various objects and attacked them, the statement said.

In one location, residents locked doorways using chains, preventing the entry or exit from a building. Officers operating in the area needed to be rescued by other police units.

Returning on Tuesday to follow up on the arrests, police detained one of the wanted suspects who tried to evade capture by wearing women’s clothes and a face mask, the statement said.

No further arrests were apparently made, though police said they were working on tracking down additional suspects. 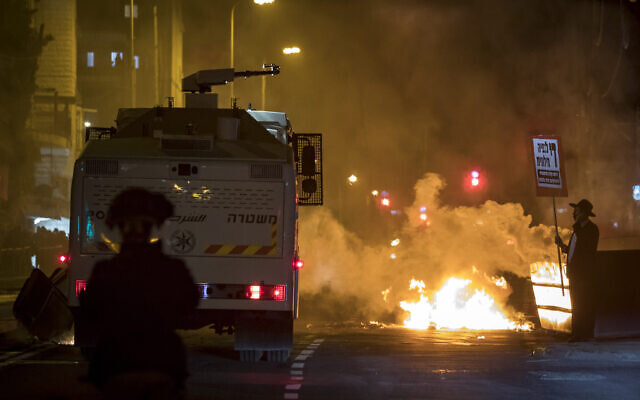 Ultra-Orthodox Jewish men scuffle with Israeli police as they protest against the contractions work for the Jerusalem Light Rail, in Bar Ilan, Jerusalem, January 25, 2021. (Olivier Fitoussi/Flash90)

In January, ultra-Orthodox protesters poured cement onto tracks of the light rail. Light rail operator CityPass said the vandalism could have caused a train to overturn.

Protests against the new line have seen light rail cars and stations vandalized. Dozens have been arrested.