UNITED NATIONS — A UN official on Tuesday accused Iran of lying in its explanation of how it shot down a Ukrainian passenger jet near Tehran last year at a time of acute tension with the US.

On January 8, 2020, Ukraine International Airlines flight PS752 crashed shortly after taking off from Iran’s capital Tehran killing all 176 people aboard, including 55 Canadians.

Agnes Callamard, a special UN rapporteur on extra-judicial killings, unveiled the results of a probe into the tragedy and said the Iranian explanation of what went wrong is full of contradictions.

“The most troubling thing is that the explanations by the Iranian authorities about the mistake or mistakes that were made do not add up,” she told reporters.

She said the Iranian version of events is “full of contradictions. They are contradicted by the facts, by the technical assessments of many experts.”

“Why does Iran lie? Because there is no other term to use,” said Callamard.

She cited what she said were Iranian statements about the “visual approach” of the aircraft and “instructions on the radar systems.”

Callamard said Iran has failed to explain how its military could make such a huge mistake as to shoot down a passenger plane.

Callamard said that under international law it is possible to “kill by mistake” and that jurisprudence determines if the error was committed in good faith.

“My conclusion is that on the basis of international law, error is not a defense for Iran,” said Callamard. 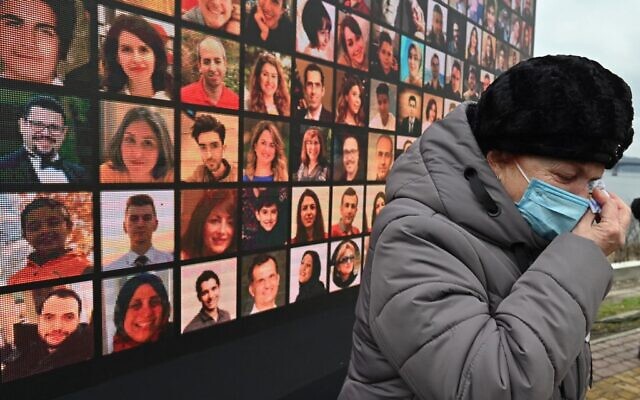 In this file photo taken on January 08, 2021 a woman cries in front of a huge screen bearing portraits of late crew members and passengers of Ukraine International Airlines Flight 752, which crashed in Iran a year before, during a commemorative ceremony at the site of a future memorial on the Dnipro river bank in Ukraine’s capital Kiev (Genya SAVILOV / AFP)

She said Iran had not answered the questions she asked as part of her investigation.

UN experts like her are affiliated with the UN Security Council but this body is not bound by their conclusions.

Tensions between Iran and the US were soaring at the time of the downing of the Ukrainian jetliner.

Iranian air defenses were on high alert for a US counter-attack after Tehran fired missiles at a military base in Iraq that was used by US forces.

Those missiles were fired in response to the killing of General Qassem Soleimani, who headed the foreign operations arm of Iran’s Islamic Revolutionary Guard Corps, in a US drone strike near Baghdad’s international airport.