The eight independent experts, who were appointed by the United Nations but who do not speak on its behalf, warned that the professor, arrested during a visit to Iran almost five years ago, was “near death.”

“Djalali’s situation is truly horrific,” said the group, made up of experts on the rights situation in Iran, on extrajudicial executions, on arbitrary detention and on torture.

“He has been held in prolonged solitary confinement for over 100 days with the constant risk of his imminent execution laying over his head,” they said in a statement.

“There is only one word to describe the severe physical and psychological ill-treatment of Djalali, and that is torture.”

A flyer during a protest outside the Iranian embassy in Brussels for Ahmadreza Djalali, an Iranian academic detained in Tehran for nearly a year and reportedly sentenced to death for espionage, February 13, 2017. (Photo by DIRK WAEM / Belga / AFP)

Djalali, formerly based in Stockholm where he worked at the Karolinska Institute, a medical university, was arrested during a visit to Iran in April 2016.

He was subsequently found guilty of passing information about two Iranian nuclear scientists to Israel’s Mossad intelligence agency that led to their assassinations, and was sentenced to death in 2017 on espionage charges.

Djalali has claimed he is being punished for refusing to spy for Iran while working in Europe.

The experts insisted that the allegations again him were “completely baseless and he should be allowed to return to his family in Sweden as soon as possible.”

They had voiced alarm back in November, when he was abruptly taken into solitary confinement, raising concern his execution could be imminent.

They warned Thursday that “the cruel and inhuman treatment by authorities, (was) raising fears that, even if he is not executed, he may soon die in detention.”

The experts said prison officials were shining bright lights in Djalali’s small cell 24 hours a day to deprive him of sleep.

At the same time, they warned, “medical issues have prevented him from eating properly, resulting in dramatic weight loss.”

Djalali was reportedly now in such bad shape he was having difficulty speaking, they said.

“We are shocked and distressed by (his) cruel mistreatment,” they added. 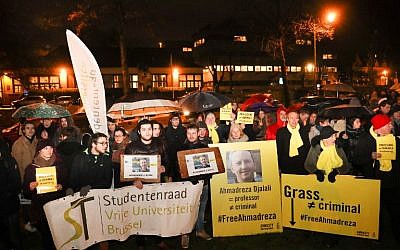 A rally at the Iranian embassy in Brussels, in support of Ahmadreza Djalali, after Iran’s Supreme Court upheld the death sentence handed to the Iranian-born Swedish resident and specialist in emergency medicine, on December 14, 2017. (AFP Photo/Belga/Virginie Lefour)

In their statement, the experts also highlighted that his case was in no way an isolated incident in Iran, but was rather emblematic of the country’s “systematic use to punish and pressurize detainees, including to make forced confessions.”

“We urge the Iranian government, parliament and judiciary to halt the use of solitary confinement as a form of punishment and to impose a moratorium on the death penalty as a first step towards its abolition,” the experts said.