Inspectors from the International Atomic Energy Agency visited the Natanz plant in Iran on Wednesday, days after an explosion took place there, the nuclear watchdog said.

“IAEA inspectors are continuing their verification and monitoring activities in Iran, and today have been at the Natanz enrichment site,” it said in a statement.

No further details were immediately available.

Iran blamed the Sunday blast at Natanz on Israel, and in response vowed to ramp up its uranium enrichment to 60 percent, marking a significant escalation.

On Tuesday, a senior Iranian official confirmed that the blast destroyed or damaged thousands of centrifuges used to enrich uranium.

Alireza Zakani, the hardline head of the Iranian parliament’s research center, referred to “several thousand centrifuges damaged and destroyed” in a state TV interview. However, no other official has offered that figure and no images of the aftermath have been released.

The remarks appeared to confirm Israeli reports indicating the damage was widespread and Iran will have significant difficulty restoring its enrichment to previous levels in the coming months.

The enrichment to 60% — Iran’s highest-ever level — would bring Iran closer to the 90% purity threshold for military use, and shorten its potential “breakout time” to an atomic bomb.

Iran had been enriching up to 20%, already a short step from weapons-grade levels. Iran said it will install new centrifuges in response to the attack, and has threatened Israel. In a possible first retaliation, an Israeli-owned ship was attacked in the Gulf of Oman Tuesday.

“Enabling IR-6 [centrifuges] at Natanz today, or bringing enrichment to 60 percent: This is the response to your malice,” Rouhani said in televised remarks. “What you did was nuclear terrorism. What we do is legal.”

European powers on Wednesday expressed “grave concern” over the move to boost enrichment.

The weekend incident at Natanz was initially described only as a blackout in the electrical grid feeding above-ground workshops and underground enrichment halls — but later Iranian officials began calling it an attack.

On Monday, an Iranian official acknowledged that the blast took out the plant’s main electrical power system and its backup.

The New York Times reported that the blast was caused by a bomb that was smuggled into the plant and then detonated remotely. The report cited an unnamed intelligence official, without specifying whether they were American or Israeli. This official also specified that the blast took out Natanz’s primary electrical system as well as its backup.

The head of Iran’s Atomic Energy Organization, Ali Akbar Salehi, claimed earlier Monday that emergency power had already been restored at the plant and enrichment was continuing.

“A large portion of the enemy’s sabotage can be restored, and this train cannot be stopped,” he told Iranian media, according to the Times.

Iran’s Foreign Ministry said it damaged some of Iran’s first-generation IR-1 centrifuges, the workhorse of its nuclear program.

Israel has hinted at being involved, but not officially confirmed any role in the attack. Prime Minister Benjamin Netanyahu has repeatedly vowed never to allow Tehran to obtain a nuclear weapon and Israel has twice preemptively bombed Mideast nations to stop their atomic programs. 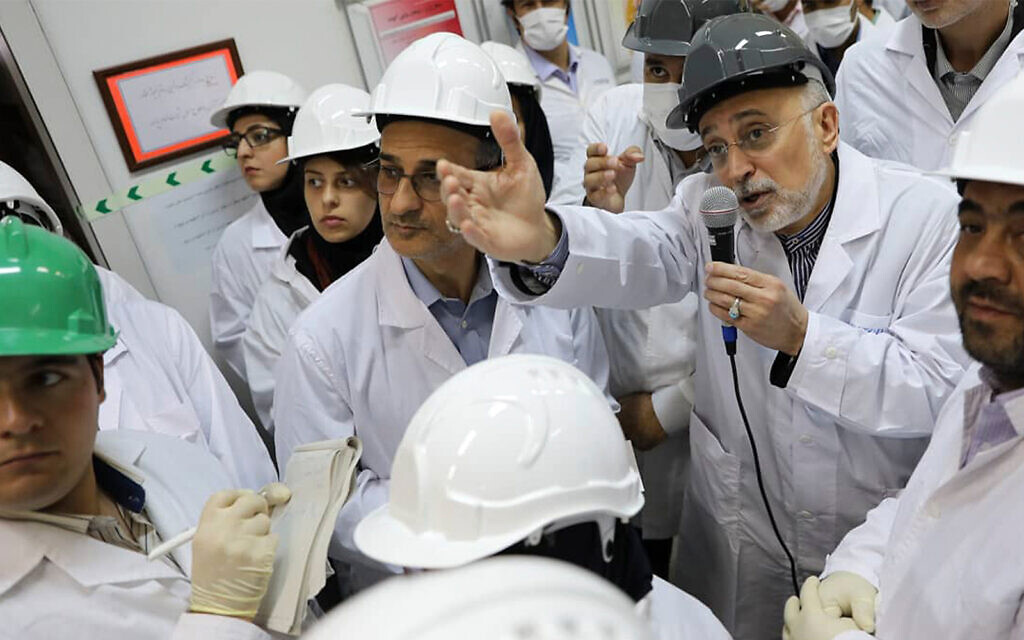 The IAEA indicated a separate violation by Iran of its nuclear deal with world powers last week, as Iranian representatives met with the deal’s other signatories in Vienna in a bid to rescue the accord.

The Biden administration has repeatedly said it will return to the 2015 nuclear deal if Iran first returns to compliance. Iran has taken a hardline approach, demanding the US lift all sanctions against it first, putting the two sides at a stalemate.

The nuclear talks in Vienna were set to resume Wednesday, but Russia’s ambassador to the UN said they had been postponed by a day. Russia is a signatory of the deal.

Israeli officials, led by Netanyahu, have adamantly opposed the US returning to the nuclear deal, putting Jerusalem at odds with the new White House administration.

US and Israeli security officials held a bilateral strategic group meeting aimed at collaborating in the effort to prevent Iran from obtaining a nuclear weapon on Tuesday. The US stressed its commitment to preventing a nuclear-armed Iran during the virtual discussion and invited Israeli National Security Adviser Meir Ben-Shabbat to visit Washington in the coming weeks.