NEW YORK — The US once again blocked the release of a UN Security Council joint statement on the ongoing violence in Israel and Gaza, telling member states at the second emergency meeting on the matter in three days that such a public measure would be “unhelpful” in de-escalating the situation, two diplomats involved told The Times of Israel on Wednesday.

Consensus was needed from all 15 members to publish a joint statement and the US mission was the only one that refused to back it, the diplomats said.

The United States sees the Security Council meeting as a sufficient show of concern, one diplomat said on condition of anonymity.

“The US doesn’t see that a statement will help de-escalate,” said another.

Closed consultations, as the one held on Wednesday, are not uncommon to discuss regional conflicts, but holding two in three days is rare. The emergency session requires the agreement of all 15 member states in order to convene.

The UN’s most powerful body has not yet taken any action on the matter.

As he did on Monday, the UN’s Special Coordinator for the Middle East Peace Process Tor Wennesland briefed member states on the latest developments in Israel and Gaza during Wednesday’s session, which was requested by the Chinese, Norwegian and Tunisian missions.

Wennesland warned during the meeting that the “situation has deteriorated since Monday… there is a risk of a spiral of violence,” according to a diplomatic source.

As on Monday, Norway introduced its draft of a joint statement regarding the ongoing violence, asking all members to back it.

Hesitation from the US mission prevented the release of the statement after the first meeting earlier this week, though at the time Washington said it wanted more time to deliberate.

The draft statement urged Israel to prevent the looming evictions of Palestinian families in the East Jerusalem neighborhood of Sheikh Jarrah, and called for “restraint” and respect for “the historic status quo at the holy sites,” diplomats involved in the meeting confirmed. The original statement also urged both sides to act in order to de-escalate the situation, they said.

The draft underwent a number of amendments per requests from the US and UK, whose representative made sure it included a condemnation of the firing of incendiary devices and rockets from Gaza, a diplomat said. 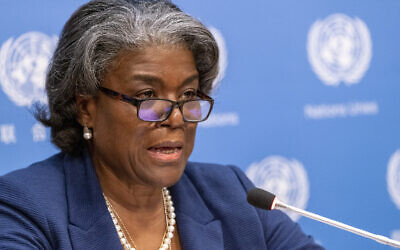 US Ambassador to the United Nations, Linda Thomas-Greenfield speaks to reporters during a news conference at United Nations headquarters, March 1, 2021. (Mary Altaffer/AP)

The proposed statement called on Israel “to cease settlement activities, demolitions and evictions, including in east Jerusalem in line with its obligations under international humanitarian law” and refrain from unilateral steps “that exacerbate tensions and undermine the viability of the two-state solution.”

The statement also reiterated the council’s support for a negotiated solution to the decades-old Israeli-Palestinian conflict where “two states, Israel and an independent, democratic, contiguous and sovereign Palestine, live side by side in peace within secure and recognized borders.”

In response to a query on the matter, a spokesperson for the US mission said, “The United States is engaging constructively to ensure any action by the Security Council is helpful in de-escalating tensions.”

One security council diplomat, speaking on the condition of anonymity, expressed bewilderment over the US stalling of the statement, claiming it was nearly identical to the one issued by the State Department on Sunday.

US Secretary of State Antony Blinken on Wednesday reiterated his urging for a halt to violence between Israel and the Palestinians in a call with Prime Minister Benjamin Netanyahu.

“The secretary reiterated his call on all parties to de-escalate tensions and bring a halt to the violence,” said a State Department statement. 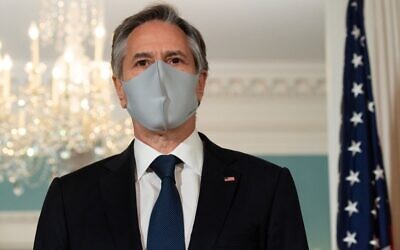 US Secretary of State Antony Blinken speaks to the press prior to a meeting with Jordanian Foreign Minister Ayman Safadi at the State Department in Washington, DC, May 10, 2021 (SAUL LOEB / POOL / AFP)

“The secretary emphasized the need for Israelis and Palestinians to be able to live in safety and security.”

Netanyahu thanked Blinken for the US’s support for Israel’s right to defend its citizens.

Renewed rocket fire and rioting in mixed Jewish-Arab towns has fueled growing fears that deadly violence between Israel and Palestinians could descend into full-scale war.

The most intense hostilities in seven years have killed six in Israel, including an Israeli soldier and one Indian national, since Monday.

According to the Strip’s Hamas-run health ministry, 53 Palestinians have died since Monday night, including 14 minors and three women, and 320 have been wounded. The IDF said more than half of those killed were members of terror groups involved in the fighting and that some, including several of the children, were killed by errant rockets fired from Gaza that fell short of the border and landed inside the Strip, not by Israeli strikes.

AFP contributed to this report