BAGHDAD, Iraq (AFP) — The Iraqi army said Sunday that two drones were destroyed above a base housing US troops, one month after the same base was targeted by an armed drone.

The US military’s C-RAM defense system was activated to shoot down the drones above the Ain al-Assad base, located in Iraq’s western desert, the Iraqi military said.

Several hours earlier, a rocket was shot down above Baghdad airport, “without causing casualties or damage,” said Colonel Wayne Marotto, spokesman for the US-led military coalition in Iraq.

The coalition was sent to Iraq to help the country’s military fight the Islamic State jihadist group — a campaign that Baghdad declared won in late 2017.

A picture taken on January 13, 2020, during a press tour organized by the US-led coalition fighting the remnants of the Islamic State group, shows a US soldier walking past a drone at the Ain al-Asad airbase in the western Iraqi province of Anbar (Ayman Henna / AFP)

There are currently 2,500 US troops in Iraq, feeding into total coalition troop strength of 3,500.

The US consistently blames Iran-linked Iraqi factions for rocket and other attacks against Iraqi installations housing its personnel.

Since the start of this year, there have been 39 attacks against US interests in Iraq. The vast majority have been bombs against logistics convoys, while 14 were rocket attacks, some of them claimed by pro-Iran factions. 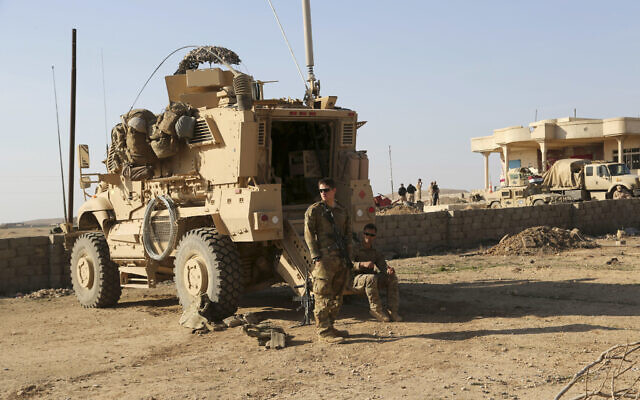 In this February 23, 2017 photo, US Army soldiers stand outside their armored vehicle on a joint base with the Iraqi army, south of Mosul, Iraq. (AP Photo/ Khalid Mohammed, File)

For Western diplomats and high-ranking military officials in Iraq, the attacks are not only a danger to US personnel, but they also compromise the fight against ISIS, which retains sleeper cells in mountainous and desert areas.

“Those attacks are a distraction,” said one such source. “The only people they are helping are jihadists because every time they attack a base where the coalition has advisors, those advisors have to stop what they are doing to concentrate on force protection.”

The use of drones against American interests by Iran-linked factions is a relatively new tactic.

The US military has previously accused pro-Iran Iraqi groups of helping Yemen’s Houthi rebels carry out attacks using such devices against Saudi interests.