A video analysis shows the United States may have mistakenly targeted an aid worker rather than Islamic State fighters in its final strike in Afghanistan, which killed 10 civilians, according to a Friday report.

The Pentagon has said it disrupted a new attack planned by the Islamic State extremist group through a Reaper drone strike on August 29 — the day before US troops ended their 20-year mission and following a devastating attack outside the airport where vast crowds rushed to escape the victorious Taliban.

But Kabul resident Aimal Ahmadi told AFP that the strike killed 10 civilians including his small daughter, nephews, nieces and his brother, the aid worker Ezmarai Ahmadi, who was driving the car that was struck after he parked.

Military officials told The New York Times that the aid worker was observed loading what they thought could be explosives into the vehicle. But, analyzing security camera footage, the paper said the US military may instead seen Ezmarai Ahmadi and a colleague loading canisters of water, which was in short supply after the collapse of the Western-backed government, and picking up a laptop for his boss.

Ezmarai Ahmadi was an electrical engineer for the California-based aid and lobbying group Nutrition and Education International and was among thousands of Afghans who had applied for resettlement in the United States, relatives said.

“We have nothing to do with terrorism or ISIS,” said the boss, who also has a US resettlement case and was not named in the report. “We love America. We want to go there.”

Afghan residents and family members of the victims gather next to a damaged vehicle inside a house, day after a US drone airstrike in Kabul on August 30, 2021. (Photo by WAKIL KOHSAR / AFP)

The report said that an MQ-9 Reaper drone tracked Ezmarai Ahmadi’s car throughout the day, with US officials also alleging they intercepted messages sent between the car and an Islamic State safehouse. However, others who were in the car that day denied the claims.

At the end of the day, Ezmarai Ahmadi went to his home near the airport. US officials told the newspaper that although they had scant details on his identity, they were sure he posed a threat to American soldiers stationed at the airfield.

When he reached his home — which was not the alleged terrorist safehouse — the decision was made to launch a Hellfire missile despite the target being in a residential area. The report quoted US officials as saying the drone operator quickly surveyed the area and assessed with “reasonable certainty” that there would be no women or children or noncombatant casualties.

US officials say that a larger blast took place after the drone strike, showing that there were explosives in the vehicle.

But the New York Times investigation said there was no evidence of a secondary explosion — only a single dent on a nearby gate and no clear signs of an additional blast such as blown-out walls.

Aimal Ahmadi said that 10 civilians were killed, including seven children. US officials have acknowledged three civilian deaths but argued that the hit prevented another deadly attack. 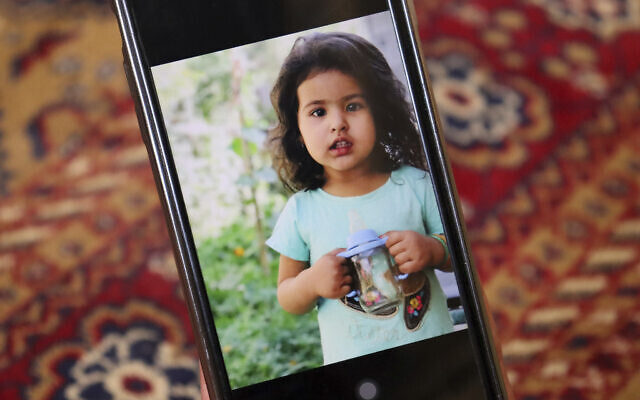 Emal Ahmadi shows a photo of his family member who was killed during a US drone strike on their home, Sept. 2, 2021 (AP Photo/Khwaja Tawfiq Sediqi)

Commenting on the report, Pentagon spokesman John Kirby said that US Central Command “continues to assess” the strike but that “no other military works harder than we do to prevent civilian casualties.”

“As Chairman [Mark] Milley said, the strike was based on good intelligence, and we still believe that it prevented an imminent threat to the airport and to our men and women that were still serving at the airport,” Kirby said, referring to the top US general.

The New York Times noted that a rocket attack the following morning, claimed by the Islamic State group, was carried out from a Toyota Corolla similar to Ahmadi’s.

More than 71,000 Afghan and Pakistani civilians have died directly from the war launched by the United States after the September 11, 2001 attacks, with casualties rising dramatically after then president Donald Trump relaxed rules of engagement in 2017, according to a Brown University study in April.