United, Delta and American said Friday they are resuming flights to Tel Aviv after Israel and Hamas agreed to a cease-fire in violence that had included rockets fired at Ben Gurion International Airport.

Delta will “closely monitor the security situation and will make adjustments to our flight schedules as necessary,” spokesman Morgan Durrant said.

Travellers at the Ben Gurion International Airport, on May 7, 2021. (Yossi Aloni/FLASH90)

A spokeswoman said the airline plans to also resume flights from Chicago and San Francisco over the weekend. United halted flights from all three US cities to Israel on May 12.

Lufthansa, Austrian and Swiss airlines all also announced that they will be renewing flights to Israel on Sunday, Channel 12 reported.

Emirates Airlines and FlyDubai are still shuttling travelers between Israel and the Gulf.

Most foreign airlines canceled their flights to and from Israel last week due to the rocket fire at the country from terrorists in the Gaza Strip.

Passengers had to disembark at Ramon and board buses back to the center of the country; meanwhile, the empty planes flew to Ben Gurion to take on new passengers before departing to their destinations abroad. 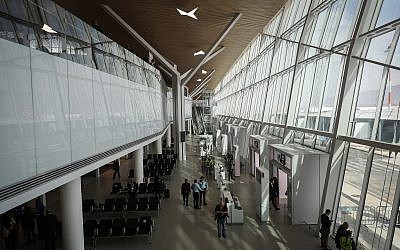 The new Ramon airport, named in memory of Ilan and Asaf Ramon, during the official opening ceremony, near the southern Israeli city of Eilat, on January 21, 2019. (Yonatan Sindel/Flash90)

Hamas then said it targeted Ramon Airport amid a barrage in the direction of Israel’s southernmost city of Eilat, using a rocket it claimed could strike anywhere in Israel.

The decision was meant to broaden the air corridor taken by passenger flights in and out of the country and to minimize the numbers of passenger-filled planes on the ground at any one place, in order to lower the chances that rocket fire from Gaza would hit a plane.

The cancellations of flights came just as Israel was on the cusp of being one of the most unrestricted destinations or departure points in the world from the aspect of coronavirus-related limitations.

A mass inoculation program that has already vaccinated over half the Israeli population brought down daily infection rates from thousands at the beginning of the year to just dozens.