Leading American Jewish organizations offered mixed reactions to the US-brokered normalization deal between Israel and Sudan following its announcement on Friday, with the Jewish Democratic Council of America expressing “concern” about US President Donald Trump’s policy toward Israel, and two other groups issuing unfiltered praise for the agreement.

Halie Soifer, executive director of the Jewish Democratic Council of America, said in a statement that the group welcomed normalization deals for Israel, but that the Sudan agreement appeared motivated by Trump’s personal interests.

“We are concerned that President Trump views foreign policy toward Israel as a series of self-serving transactional deals. This is another Israel quid pro quo driven by Trump’s short-term political interests rather than the long-term safety and security of the United States and its allies, including Israel,” Soifer said. “Trump demonstrated that today when he called Israeli Prime Minister Netanyahu to discuss Sudan and asked him to comment as he vilified Joe Biden.”

During the call announcing the deal, Trump asked Prime Minister Benjamin Netanyahu, “Do you think Sleepy Joe could have made this deal?”

“Uh… one thing I can tell you is we appreciate the help for peace from anyone in America,” Netanyahu replied.

Soifer said Trump had removed Sudan from the US list of state sponsors of terror, in a transactional exchange for its compensating the families of US terror victims and its normalization agreement.

Soifer said the normalization deal “appears timed more to influence the outcome of the US election than a result of tangible policy considerations.”

Trump “has used Israel as a political tool, politicizing US foreign policy toward Israel to serve his own interests in a way that no president has ever done before,” Soifer said.

The Jewish Democratic Council of America describes itself as the political voice of Jewish Democrats and advocates “socially progressive, pro-Israel, Jewish community values.”

Two other leading groups welcomed the deal without any reservations, and issued calls for the Palestinians to return to negotiations with Israel following its recent normalization agreements with Sudan, the United Arab Emirates and Bahrain.

Democratic Majority for Israel, a group that embraces pro-Israel policies close to the establishment pro-Israel community, issued a brief statement applauding the agreement.

“Democratic Majority for Israel congratulates the leaders of Israel and Sudan for establishing diplomatic ties. Sudan is the third Arab nation to normalize its relationship with Israel in recent months,” the group said in a statement. “This is another important step towards peace and stability in the region. We hope that Palestinian leaders will similarly decide to resume peace talks with Israel in the pursuit of working towards a two-state solution.”

The Conference of Presidents of Major American Jewish Organizations, an umbrella group representing dozens of US Jewish groups, said the agreement “deserves universal support by all who seek peace in the Middle East.”

“These landmark diplomatic agreements represent the dawn of a new age for the relationship between the Jewish state and the Muslim world. In normalizing relations with Israel, the United Arab Emirates, Bahrain, and now Sudan pave the way for more Arab and Muslim countries to embrace peace and reconciliation,” the group said in a statement.

“The stubborn reluctance of Palestinian leaders to even discuss peaceful solutions leaves them increasingly out of step with the rest of the Arab and Muslim world. We call upon the Palestinian Authority to heed the wind of change, have a change of heart, choose peace over war, and finally return to the negotiating table,” the statement said. 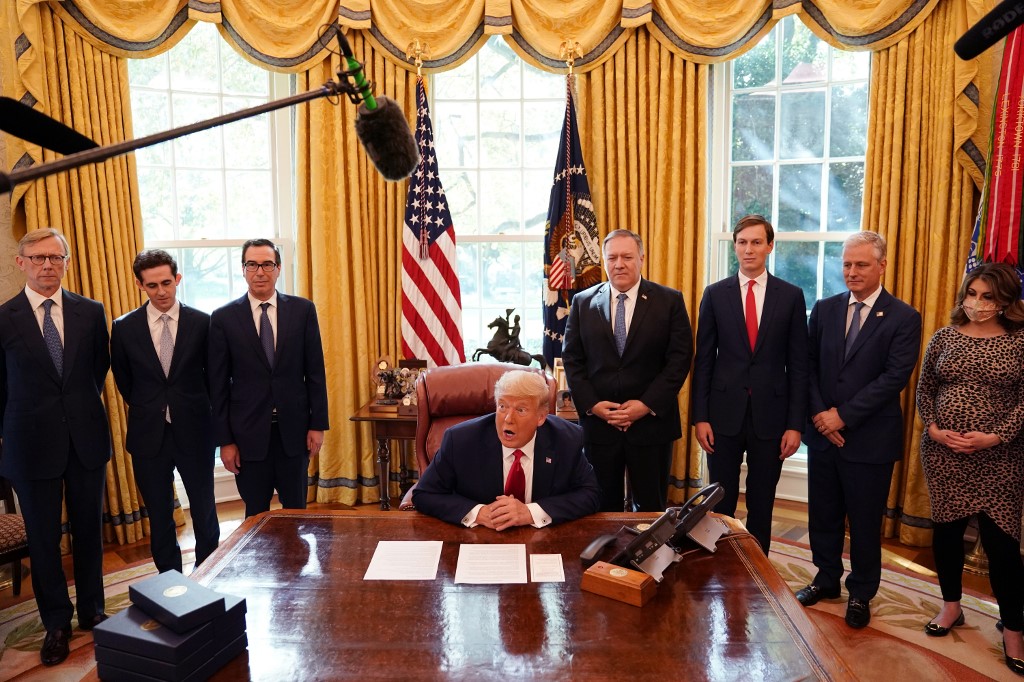 US President Donald Trump announces that Sudan will normalize relations with Israel at the White House in Washington, DC, on October 23, 2020. (Photo by Alex Edelman / AFP)

Trump announced the Israel-Sudan deal on Friday at the White House in a call with Netanyahu and Sudan’s leaders.

A joint statement from the US, Israel and Sudan released by the White House said Netanyahu, Sudan Sovereign Council President General Abdel Fattah al-Burhan and Sudanese Prime Minister Abdalla Hamdok “agreed to the normalization of relations between Sudan and Israel and to end the state of belligerence between their nations.”

Trump earlier on Friday signed a waiver to remove Khartoum from the State Department’s blacklist of state terror sponsors. Congress now has 45 days to approve the measure.

Sudan’s presence on the terror list — along with Iran, North Korea and Syria — subjects it to crippling economic sanctions and limits the impoverished country’s access to international credit.

Trump announced his intention to sign the waiver on Monday, saying he would go through with the move after Sudan followed through on its pledge to deliver $335 million to compensate American victims of past terror attacks and their families. Sudan transferred the funds the next day.

The money is meant for victims of the 1998 bombings of US embassies in Kenya and Tanzania by the al-Qaeda network while its leader, Osama bin Laden, was living in Sudan.

The deal with Sudan will include aid and investment from Israel, particularly in technology and agriculture, along with further debt relief. It comes as Sudan and its transitional government teeter on the edge. Thousands have protested in the country’s capital Khartoum and other regions in recent days over dire economic conditions.

Recently, the United States brokered diplomatic pacts between Israel and the UAE and Bahrain. Jordan recognized Israel in the 1990s, while Egypt was the first to sign a peace deal in 1979.

Netanyahu has made it a priority to forge ties with formerly hostile countries in Africa and the Arab world in the absence of any progress with the Palestinians during his tenure, which has lasted over a decade. Biden pleads for unity as Trump says election should be overturned