A senior US intelligence official on Wednesday said airstrikes in eastern Syria on Iranian-linked targets the previous night were carried out by Israel with intelligence provided by the United States.

The remarks by the official after the attack marked a rare incidence of publicized cooperation between the two countries over choosing targets in Syria.

The US official, who requested anonymity to speak about sensitive national security matters, said the strikes targeted a series of warehouses near the Iraqi border that were being used in a pipeline to store and stage Iranian weapons.

According to the official, US Secretary of State Mike Pompeo discussed Tuesday’s airstrikes with Yossi Cohen, chief of Israel’s Mossad spy agency, at a public meeting in popular Washington restaurant Café Milano on Monday.

The official said the warehouses also served as a pipeline for components that support Iran’s nuclear program. It was not clear if that statement was meant to indicate that such nuclear components were targeted in the overnight strikes or if it referred to past uses of those facilities.

An explosion from a suspected Israeli airstrike in eastern Syria on January 13, 2021 (Screencapture/Twitter)

The strikes, which reportedly targeted more than 15 Iran-linked facilities, were the fourth reported attack by Israel against Iranian targets in Syria in the past two weeks, a significant increase from the normal rate of such strikes.

According to Syria’s official SANA news agency, the strikes targeted sites in the areas of Boukamal and Deir Ezzor in eastern Syria, where there is a major presence of Iranian-backed militias. Though not unprecedented, alleged Israeli strikes on targets near the Syrian-Iraqi border are uncommon, due to the challenges of conducting such operations far from Israel, which likely accounts for the large numbers of targets struck in the raids.

SANA said officials were assessing if any damage or casualties were caused.

The reported strikes came hours after Defense Minister Benny Gantz visited the Syrian border, where he said Israel would continue to take action against its enemies “near and far.”

“We aren’t sitting around and waiting. We’re active defensively, politically, and economically,” he said.

The Britain-based Syrian Observatory for Human Rights, a pro-Syrian opposition organization, said that the strikes hit 18 facilities and that 31 fighters were killed, seven of them Syrian soldiers and the rest “militia fighters allied with Iran.”

Though other news outlets in Syria reported that there were casualties in the strikes, those figures could not be verified and were not reported by official sources in Syria. The Observatory has regularly been accused by Syrian war analysts of inflating casualty numbers, as well as inventing them wholesale.

The organization said these were the deadliest airstrikes by Israel since June 2019, when the Israeli military allegedly conducted raids in the same area. 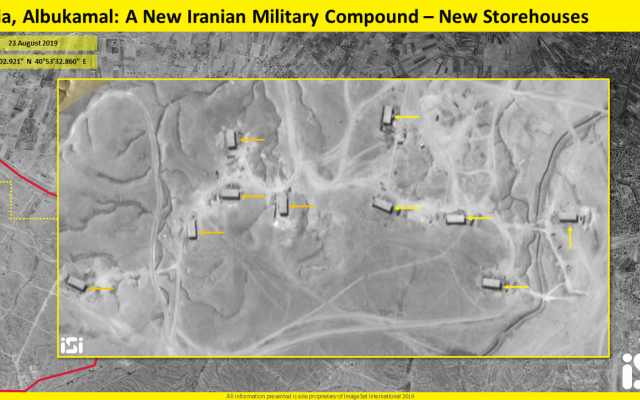 Satellite image showing the construction of a new Iranian military base in Iraq’s Albukamal Al-Qaim region, near the Syrian border (ImageSat International via Fox News)

The Israel Defense Forces had no comment on the late-night strikes, in accordance with its policy to neither confirm nor deny its operations in Syria, save for those in retaliation for an attack from the country.

The area targeted has reportedly been repeatedly struck by Israel in recent years as it houses a number of bases used by Iranian-backed groups and is key to a land corridor for Tehran that links Iran across Iraq and Syria through Lebanon, which Iran uses to smuggle in weapons and rockets, mainly to the Hezbollah terror group.