JTA — After several challenges to pandemic-induced restrictions on houses of worship citing religious liberty, an Orthodox Jewish advocacy group is taking its case to the US Supreme Court in the hope that the new conservative majority will rule in its favor.

Agudath Israel, an umbrella organization representing ultra-Orthodox Jews, is challenging New York Gov. Andrew Cuomo’s limitations on houses of worship in “red zones,” areas with especially high COVID-19 test positivity rates. Agudath Israel claims that they were implemented in a way that discriminated on the basis of religion.

It’s the latest in a string of suits brought by Agudath Israel or with its support to challenge pandemic-related restrictions to worship on the basis of religious discrimination.

With Amy Coney Barrett’s confirmation to the Supreme Court, becoming the sixth conservative justice, the Orthodox plaintiffs may have a better chance at convincing the high court to rule in their favor, providing an injunction against Cuomo’s restrictions on houses of worship in red zones.

Earlier this year, three Orthodox men and two Catholic priests sued New York officials over limitations on attendance at synagogue services that were imposed at the beginning of the pandemic, arguing that restrictions should not be stricter for houses of worship than for other gathering places, like businesses. The judge in that case blocked the state from enforcing the stricter rules on houses of worship.

But more recent cases pushing the issue have fallen short.

An Orthodox organization representing summer camps tried suing the state over its restrictions on camp this summer, also arguing that the restrictions constituted religious discrimination. (The camp operators group has ties to Agudath Israel.) The judge ruled against the camp operators, saying the religious discrimination argument was not compelling.

And just last month, a federal judge ruled against Agudath Israel’s request for an injunction against the red zone restrictions, saying the restrictions did not violate religious liberties.

Agudath Israel is appealing the case to the Supreme Court, which gained a jurist sympathetic to religious liberty arguments when Barrett was appointed. Advocates expect the court to consider and determine cases in ways that might have been unlikely before her confirmation.

“Given the new make-up of the court, the plaintiffs think there are now enough justices interested in issuing emergency relief and providing broader constitutional guidance on what government is prohibited from doing even in the midst of a global pandemic,” Michael Helfand, associate dean for faculty and research at Pepperdine University’s Caruso School of Law, said in an email. 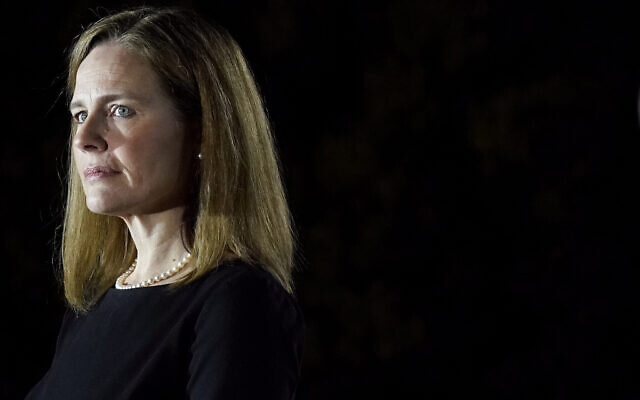 Amy Coney Barrett d just before Supreme Court Justice Clarence Thomas administers the Constitutional Oath to her on the South Lawn of the White House in Washington, October 26, 2020. (Patrick Semansky/AP)

Agudath Israel claims that Cuomo did not provide specific numbers related to the COVID-19 rates in the affected areas or scientific justification for the restrictions, and that some non-Jewish areas with higher positivity rates were not subject to the same restrictions.

The umbrella group also takes issue with the differences between the restrictions placed on houses of worship, where only 10 people are allowed to gather, and other gathering places like essential businesses.

“While we continue to emphasize safety in our communities, government cannot, under the guise of health, be allowed to have one set of rules for religious activities and another rulebook for secular activities,” said Avrohom Weinstock, Agudath Israel’s chief of staff.