US Secretary of State Antony Blinken said the Biden administration will work “with whatever the Israeli government is,” when asked during an interview about Naftali Bennett likely becoming Israel’s next prime minister.

In an interview with Axios’s Mike Allen that aired in full on HBO on Sunday night, Blinken was pressed about Bennett’s opposition to a two-state solution with the Palestinians.

“First let’s see what actually happens in Israel in terms of the government,” Blinken replied.

The Knesset will vote by June 14 on whether to approve the new eight-party coalition that would remove Prime Minister Benjamin Netanyahu, Israel’s longest-serving leader, from power. The prospective government would see the right-wing Bennett serve as prime minister for two years, followed by the centrist Yair Lapid.

The US secretary of state agreed that Bennett’s imminent ascension to the prime minister’s seat “seems to be expected, but again, I’m not doing politics, I’m going to focus on the policy, so we’ll see.”

Blinken said the United States “will work, as we always have, with whatever the Israeli government is. When it comes to two states, our president’s been very clear about this,” he added. “We see a two-state solution as the best and probably only means to ensure that, going forward, Israel remains not only a secure but a Jewish and democratic state, and the Palestinians have the state to which they’re entitled.”

But the secretary of state admitted that, when it comes to progress on a two-state solution, “the conditions right now are not there.”

“We’ve just come off of the violence in Gaza and elsewhere,” he said, referring to the 11-day conflict between Israel and Palestinian terror groups last month.

“We’re working very hard not only to make sure that the ceasefire stays in place, but to start to deal with the humanitarian situation in Gaza. And over time, if we can build a little bit more hope, a little bit more trust, a little bit more confidence, maybe then the conditions are in place to reengage on two states,” he said. 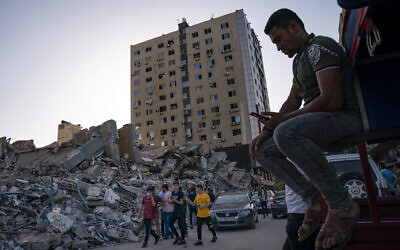 People gather to view the rubble of the al-Jalaa building in Gaza City, Friday, May 21, 2021. The building housed the Associated Press bureau in Gaza City for 15 years. (AP/John Minchillo)

Allen also asked Blinken about the widely criticized Israeli leveling of a building in Gaza that housed the offices of The Associated Press and other international media outlets. No one was injured in the strike, as Israel issued an advance warning. But the raid was condemned around the world for targeting the media. Israel maintains there were Hamas assets in the building.

“Any country would defend itself and Israel has the right,” Blinken said. “However, having said that, Israel as a democracy I think has an added burden to make sure it is doing everything possible to avoid civilian casualties. And that’s what is expected of us; it’s expected of Israel. We have our own experience with this, and I think one of the things that we found ourselves, speaking only for the United States, is that the more transparency you can provide, the more legitimacy you’re going to have.”

Blinken reiterated that the US had received intelligence from Israel about its strike on the building, which the IDF alleged was housing Hamas operations, but would not comment further.

“All I can tell you is we’ve had information shared in intelligence channels, which I can’t, for obvious reasons, comment on,” he said. “But I do think from our own experience, the more transparency, the better.”