The head of the ultra-Orthodox United Torah Judaism party on Sunday did not rule out a coalition with opposition leader Yari Lapid, and would not commit to recommending Benjamin Netanyahu lead the next government after the March 23 election, though he said this was the most likely option.

But MK Moshe Gafni later cut the interview with Channel 12 News short, growing angry after being repeatedly asked about Haredi violations of health guidelines during the coronavirus pandemic.

The coming election will be Israel’s fourth in two years. In the past rounds, UTJ vowed in advance to back Netanyahu. This time, Gafni said: “We’ll probably go with Netanyahu. If there’s no dramatic change we’ll probably recommend him.”

Asked what had changed since the previous national votes, Gafni said “there’s a difference, in society, in life here, the difficult reality we are in.”

Opposition leader Yair Lapid of Yesh Atid-Telem at his office in the Knesset, Jerusalem, on September 14, 2020. (Emmanuel Dunand/AFP)

He said he would only rule out one party as a coalition partner: Yisrael Beytenu and its leader Avigdor Liberman, who has in recent elections run on the ticket of a government free of Haredi influence.

Ultra-Orthodox parties have long reviled Lapid and his Yesh Atid party, which has also touted secularist policies and opposed ongoing ultra-Orthodox control on many levers of power. However, Gafni signaled UTJ may be less resolutely opposed to Lapid than before.

Asked if Lapid was a potential ally, Gafni demured. “Who knows? We’ll see. If his political platform changes we’ll discuss it.”

But Gafni reacted angrily to repeated questions by Cherki on what he termed a lack of leadership by ultra-Orthodox politicians on issues pertaining to the pandemic.

Over the course of the pandemic, there has been growing public anger over frequent large-scale violations of lockdown rules by some in the ultra-Orthodox community, as well as the government’s apparent reluctance to strongly enforce health rules in that community.

Though violations have been seen across Israeli society they have been most pronounced in the Haredi community, while also being encouraged by top religious leaders, with some schools opening during lockdowns with the blessing of rabbis.

With morbidity in the ultra-Orthodox community disproportionately higher than in any other single societal group, Haredi lawmakers have decried attempts to more strongly enforce laws in their communities, and have claimed such efforts to be discriminatory and unhelpful.

Gafni insisted that “the instructions are to maintain the Health Ministry’s instructions.” 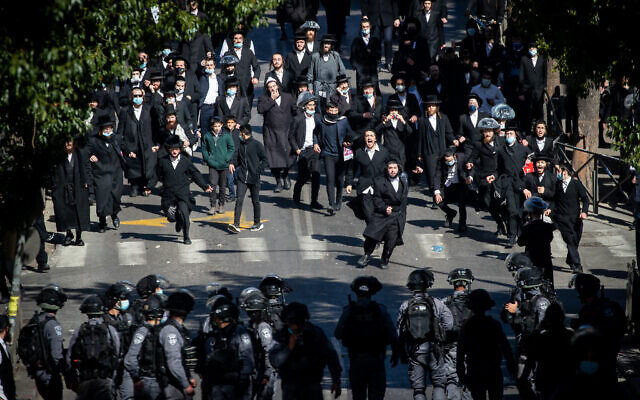 Israeli police clash with Haredi men as they enforce coronavirus restrictions in the Haredi neighborhood of Mea Shearim in Jerusalem, January 24, 2021. (Yonatan Sindel/Flash90)

Asked about Haredi violations, Gafni said various Israelis have flouted health regulations and asserted that the media is unfairly focusing on his public.

“I don’t accept this incitement, that there are violations in the Haredi public, I don’t accept it, we’ve had it, we’ve all had it,” he said. “We are doing everything that can be done on this matter.”

He said “the vast majority, the mainstream,” keep to the rules. “You’ve focused on incidents where [rules were broken].”

He denied that some rabbis, including Chaim Kanievsky, had sanctioned the opening of institutions in violation of the rules.

When Cherki said this was simply untrue, Gafni ended the interview.

Police have been criticized for failing to effectively enforce health rules in Haredi communities.

Police told media outlets that dispersing the crowds would have caused “bloodshed.”

Netanyahu has been seen as unwilling to anger his Haredi political partners, without whose support he has no hope of remaining in power.

Another large funeral was held in Bnei Brak Sunday evening, leading Lapid to tweet: “An insane government, an insane funeral.”

“Police cannot say ‘I won’t enforce the law.’ If police and the government had been resolute [on curbing Haredi violations] they wouldn’t have held these funerals in the first place,” Lapid said.