Hopes of achieving herd immunity from COVID-19 received a major boost Monday, after a new Israeli study showed that the inoculated are protecting those who can’t or won’t get vaccinated.

The study, which has not yet been peer-reviewed, found the effect is so stark that with every 20-point increase in adult vaccination rates in a community, the risk of kids there testing positive halves.

Infection rates in Israel have fallen significantly in recent weeks. That is unsurprising, as it’s been well proven a person who takes the Pfizer-BioNTech vaccine, so far given to more than half of the Israeli population, is highly unlikely to get sick with COVID-19.

But research is limited as to whether the vaccines reduce the risk of transmitting the virus.

Scientists have been noting the fact that people who caught COVID-19 after only one shot have smaller viral loads and therefore seem less likely to transmit the virus. But it is still not entirely clear how this fact translates to real life: Are unvaccinated people actually safer from the virus when those around them are inoculated?

Travelers sit for the COVID test at Ben Gurion Airport on March 8, 2021, upon their arrival from New York. (JACK GUEZ / AFP)

This is an important question given that while vaccines are expected to be approved soon for children aged 12 and up, the under-12s will remain unvaccinated for the foreseeable future, and because roughly a million adult Israelis have not been vaccinated. Staff in medical organizations expect to convince only about half of them.

The new research answers the question of whether vaccinated people protect those around them with a resounding “yes.” It looked at medical data from children — who can’t yet receive vaccines — in some 223 Israeli communities, and found that the more widespread vaccination is among local adults, the less likely the kids are to test positive.

“These results provide observational evidence that vaccination not only protects individual vaccinees but also provides cross-protection to unvaccinated individuals in the community,” wrote researchers from the Technion-Israel Institute of Technology and Maccabi Healthcare Services.

Children provided the ideal test case, as they are — with very few exceptions — unvaccinated. But the key question they help to answer relates to adults. Are those who are unvaccinated because they refuse or can’t take shots for medical reasons becoming protected by the inoculation of others? 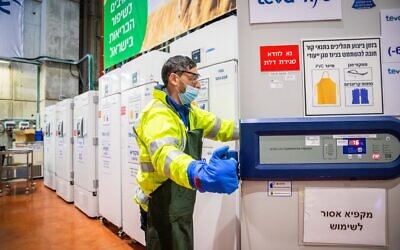 Illustrative: A worker at the Teva Pharmaceuticals logistics center in Shoham, where coronavirus vaccines are stored, on January 7, 2021. (Yossi Aloni/ Flash90)

If the answer is yes, as the research suggests, it indicates that despite all the uncertainty as to what percentage of vaccination a society needs to achieve herd immunity, Israel is firmly headed in that direction. And other societies that widely vaccinate will be too.

The research, which has been posted online, examined the vaccination rate in adults over three-week intervals in relation to COVID test data from local children 35 days later. They found a clear correlation between the extent of the adult vaccination and the extent of the drop in positive results among children’s tests.

“We find that higher vaccination rates were associated with a later lower infection rate among the unvaccinated cohort,” stated the researchers, headed by Tal Patalon of Maccabi and Prof. Roy Kishony of the Technion.

For several weeks, doctors have been cautious about discussing herd immunity, due to the scarcity of data supporting the notion that vaccines prevent transmission, and a feeling that Israel is approaching a glass ceiling in terms of vaccination as most adults have received shots but kids can’t.

Now, with the release of this study and the start of preparations to vaccinate 12- to 15-year-olds — after Pfizer found its shots to be highly effective among that cohort — herd immunity is once more firmly on the agenda.