A senior health official said Friday that the vast majority of patients in serious condition with COVID-19 in Israeli hospitals were unvaccinated.

Sharon Alroy-Preis, head of public health at the Health Ministry, told Channel 12 news that almost everyone on a ventilator is not vaccinated.

Additionally, of the 27 patients connected to extracorporeal membrane oxygenation (ECMO) machines, most of whom are under the age of 60, 90 percent have not received the inoculation.

Unlike ventilators that just assist breathing, ECMO machines provide cardiac and respiratory assistance by oxygenating a patient’s blood outside of the body and are used for the most critically ill.

“If you look at the difficult and critical patients, you definitely see a slowdown [in the rates] and that’s what we’ve been waiting for,” Alroy-Preis said, before stressing the need for vaccination.

“It is important to emphasize that the severely ill patients currently in hospitals are for the most part unvaccinated,” she said. “[Of the serious cases] there are 175 patients on ventilators, and two-thirds of them are not vaccinated at all. Of the 27 people connected to ECMO machines, most of whom are under the age of 60, 90% are not vaccinated. It’s a matter of saving lives.”

The majority of adults in Israel have received the shot, making the high percentage of unvaccinated patients on ventilators or ECMO machines a clear sign of the vaccine’s effectiveness.

Dr. Sharon Alroy-Preis, head of public health services at the Health Ministry, speaks during a press conference in Jerusalem on June 23, 2021. (Yonatan Sindel/Flash90)

Numbers put out by the Health Ministry Friday showed that of those under 60, those without a third dose of the vaccine were nearly three times as likely to wind up seriously ill, and those without any vaccination were around 10 times as likely. For those over 60, having a booster made you ten times less likely than a vaccinated person to be in serious condition, and 40 times less likely than an unvaccinated person.

Health Ministry data released Friday morning showed that more than half of all COVID cases were coming from school-age children. Another 150 new infections were found in Israelis returning from a New Year’s pilgrimage to Uman, Ukraine, with authorities wary of even higher numbers from the steady flow of returnees, and attempts by those carrying the virus to game the system with fake bills of health.

“There is room for optimism,” Health Minister Nitzan Horowitz wrote on Facebook Friday. “The virus is going from a spreading trend to one of slowing. It’s too early to celebrate, and we need to be very careful, but if we continue to act the same as we have been, we can pass this wave.”

The tally of 7,879 new cases Thursday was the lowest number for a non-holiday weekday since August 18, a sign of hope that the virus may be ebbing after weeks of nearly uncontrollable spread. The rate of spread also slowed to an R value of 0.8, down from over 1 — meaning spread was expanding — just days earlier. 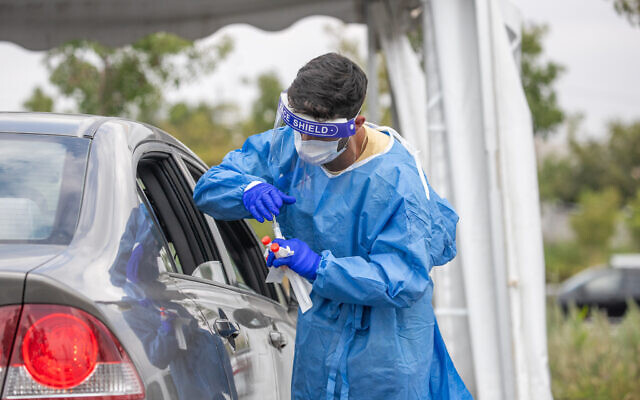 Health care workers take test samples of Israelis in a drive through complex in Modiin, on September 10 2021 (Yossi Aloni/Flash90)

The last time the Health Ministry reported a basic reproduction number below 1, before it dropped to 0.95 on Wednesday, was in early June, before new daily cases began to surge.

The number of patients hospitalized in serious condition also dropped slightly, to 667, though the death toll climbed to 7,321 victims since the start of the pandemic.

Of those testing positive on Thursday, 4,173 of them were school-aged children, ministry data showed on Friday morning. Another 233 teachers and staff were infected.