Vets carrying out an autopsy Sunday of the young fin whale washed up on a beach in southern Israel on Thursday found black liquid in the animal’s lungs, the Israel Nature and Parks Authority reported.

Chief INPA vet Roni King said it was too early to connect the liquid either to the whale’s death or to the oil spill that has brought tar contamination to Israeli beaches, from Rosh Hanikra in the north to Ashkelon in the south.

But he said that it “raised suspicions.”

King carried out the autopsy with three vets from the Kimron Veterinary Institute in Beit Dagan in central Israel.

“The main finding that’s perhaps relevant to the cause of death is a black liquid in [the whale’s] lungs,” King said. “It’s not clear whether this was the cause of death or if it’s connected to the oil. But it raises suspicions. We will continue to investigate it.”

The 17-meter (55-foot) fin whale washed up on the Nitzanim reserve in southern Israel on Thursday, along with other sea creatures.

Dolphins and whales can inhale oil, which can affect lungs, immune function and reproduction.

On Sunday the Interior Ministry, Environmental Protection Ministry and Health Ministry put out a joint statement requesting the public not to go to any beach from Rosh Hanikra in the north to Zikim in the south, for any sports, bathing or recreation purposes.

The cause of the spill — involving dozens of tons of tar spilled at sea — was not definitively clear and was also under investigation. 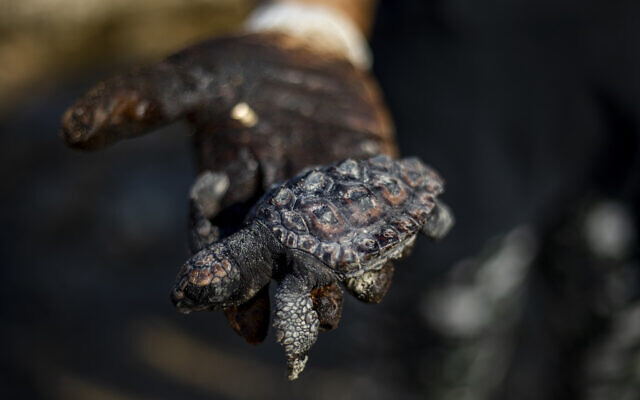 Several thousand people came to beaches along the Mediterranean coast to help with the cleanup of the spill but after several injuries, the INPA called on volunteers to go through a registration and safety training process.