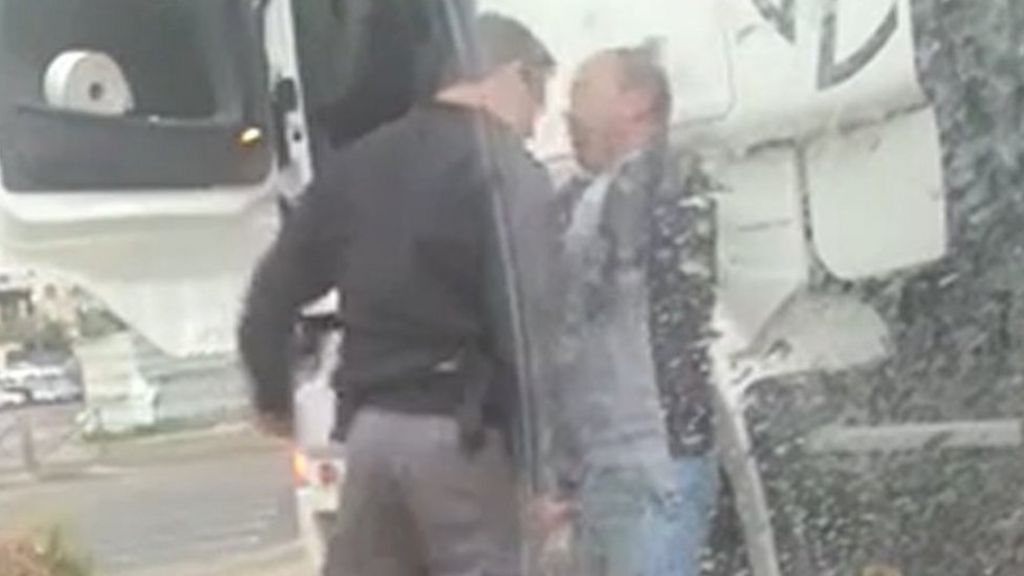 Israeli police are investigating after a video emerged showing an Israeli policeman beating up a Palestinian lorry driver.

In the footage, which has been widely shared on social media, the policeman headbutts, slaps and kicks the driver as they quarrel beside the lorry.

The incident happened at Wadi Joz, an Arab area in occupied East Jerusalem.

Police said the officer involved had shown “severe and unusual behaviour” and had been placed on forced leave.

The video, which was recorded by a Palestinian resident of East Jerusalem, has been passed to the police investigation unit.

Apparently filmed on a dashcam of another vehicle, it shows the officer remonstrating with the lorry driver.

The Jerusalem Post newspaper said the incident reportedly arose over an issue with the parking of the lorry.

The Palestinian appears to be explaining something and emphasising a point, whereupon the officer headbutts him and slaps him back and forth across the head.

As the driver clutches his head and bends over, the policeman knees him in the stomach then punches him on the back of the head.

The edited video then cuts to a moment where the second man apparently strikes the policeman on the side of the face, before a third man steps in and tries to calm the policeman down.

The footage drew outrage from Israeli Arab politicians. Member of the Knesset Ahmad Tibi called for the officer to be arrested and prosecuted.

“It is brutal behaviour of mafia and gang members, not people who are responsible for law and order,” he said.

“There is no place for such behaviour in the [police] force and I hope that the police investigation unit will prosecute him to the full extent of the law,” he said.