PARIS, France (AFP) — Violent clashes erupted in Paris Saturday as tens of thousands took to the streets to protest against new security legislation, with tensions intensified by the police beating and racial abuse of a Black man that shocked France.

Several fires were started in Paris, sending acrid smoke into the air, as protesters vented their anger against the security law which would restrict the publication of police officers’ faces.

French President Emmanuel Macron said late Friday that the images of the beating of Black music producer Michel Zecler by police officers in Paris last weekend “shame us.” The incident had magnified concerns about alleged systemic racism in the police force.

A protesters holds a sign reading ‘nausea’ in Bordeaux, France, on November 28, 2020 during a protest against the “global security” draft law. (Philippe LOPEZ / AFP)

“Police everywhere, justice nowhere” and “police state” and “smile while you are beaten” were among the slogans brandished as protesters marched from Place de la Republique to the nearby Place de la Bastille.

“We have felt for a long time to have been the victim of institutionalized racism from the police,” said Mohamed Magassa 35, who works in a reception center for minors.

“But now we feel that this week all of France has woken up,” he said.

“The fundamental and basic liberties of our democracy are being attacked — freedom of expression and information,” added Sophie Misiraca, 46, a lawyer.

Several cars, a newspaper kiosk and a brasserie were set on fire close to Place de la Bastille, police said. 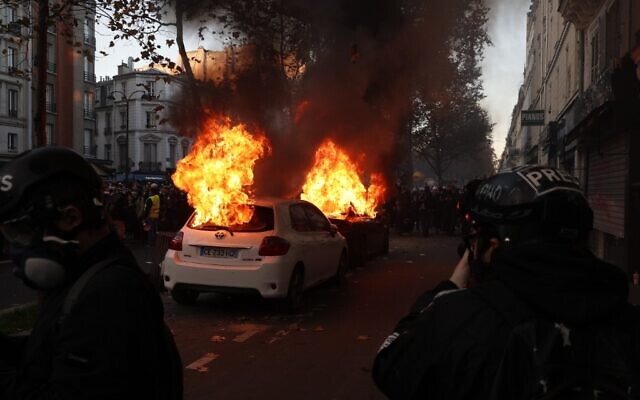 Some protesters threw stones at the security forces who responded by firing tear gas and using water cannons.

Police complained that protesters impeded fire services from putting out the blazes and said nine people had been detained by the early evening.

Thousands also took part in other marches in some 70 cities in France, including in Bordeaux, Lille, Montpellier and Nantes.

An investigation has been opened against the four police involved but commentators say that the images — first published by the Loopsider news site — may never have been made public if the contentious Article 24 of the security legislation was made law.

The article would criminalize the publication of images of on-duty police officers with the intent of harming their “physical or psychological integrity.” It was passed by the National Assembly, although it is awaiting Senate approval.

The controversy over the law and police violence is developing into another crisis for the government as Macron confronts the pandemic, its economic fallout and a host of problems on the international stage.

In a sign that the government could be preparing to backtrack, Prime Minister Jean Castex announced Friday that he would appoint a commission to redraft Article 24.

But he was forced into a U-turn even on this proposal after parliament speaker Richard Ferrand — a close Macron ally — accused the premier of trying to usurp the role of parliament.

For critics, the legislation is further evidence of a slide to the right by Macron, who came to power in 2017 as a centrist promising liberal reform of France.

The issue has also pressured the high-flying Darmanin — who was promoted to the job this summer despite being targeted by a rape probe — with Le Monde saying tensions were growing between him and the Elysee.

The images of the beating of Zecler emerged days after the police were already under fire over the forcible removal of a migrant camp in central Paris. 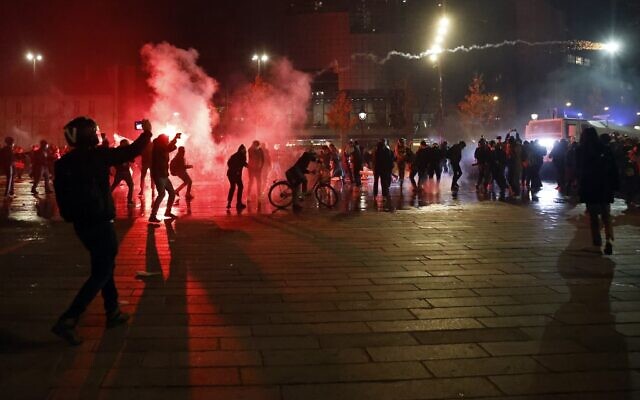 Protesters throw a firework at riot police officers during a demonstration against the ‘global security’ draft law’ in Paris, on November 28, 2020. (THOMAS COEX / AFP)

A series of high-profile cases against police officers over the mistreatment of Black or Arab citizens has raised accusations of institutionalized racism. The force has insisted violations are the fault of isolated individuals.

Three of the police involved in the beating of Zecler are being probed for using racial violence and all four are still being held for questioning after their detention Saturday was extended for another 24 hours, prosecutors said.

In a letter seen by AFP, Paris police chief Didier Lallement wrote to officers warning them they risked facing “anger and fear” in the coming weeks but insisted he could count on their “sense of honor and ethics.”