The transmission rate showed initial signs of rising on Tuesday in data released ahead of the coronavirus cabinet meeting regarding potential restrictions on the upcoming Purim holiday.

The R-value — the average number of people each positive person infects, based on new case numbers from 10 days earlier due to the virus’s incubation period — rose slightly to 0.86.

On Friday, the R-value had dropped to 0.79, the lowest number seen in months, according to data from a military taskforce. The transmission rate staying below 1 means each virus case is infecting on average less than one person — a sign of decline in the spread of the virus.

The taskforce’s report warned, “In the coming weeks increased infection may be noted, due to lifting of restrictions and the widespread British [coronavirus] variant,” adding that the UK-originated mutation is “30-70% more deadly compared to the original virus.”

Israelis dressed up in costumes, as is customary during the Jewish holiday of Purim, seen in Tel Aviv, on March 10, 2020. (Miriam Alster/Flash90)

Ministers will convene Tuesday to discuss restrictions on the Jewish holiday after Health Minister Yuli Edelstein said a day earlier that his ministry would push to clamp down on Purim festivities and prevent violations of limits on public gatherings that could cause a rise in coronavirus infections.

Hebrew media reports indicated the Health Ministry was likely to propose a nightly curfew from Thursday through Saturday. The holiday is generally marked by costume parties as well as large communal meals and drinking, in events bringing together family and friends.

However, ahead of the meeting, the Commerce Forum demanded the government only approve a curfew starting from 10 p.m. to prevent any further damage to the economy, Channel 13 News reported.

“This decision will again cause serious harm to the economy, which has only just begun to recover after 190 days of lockdown,” the letter to ministers said, adding that “if the goal of the curfew is to prevent parties and gatherings, any sane person knows these begin near midnight.”

Meanwhile, Edelstein announced Tuesday more than 70 percent of Israelis over 16 have received their first vaccine dose.

Nearly four and a half million Israelis, or some 50% of the country’s total population, have now received the first dose of the coronavirus vaccine, ministry data showed Tuesday. Over 3 million Israelis have received both doses. 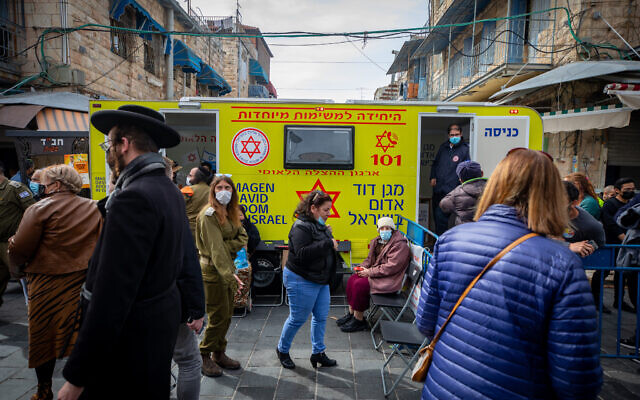 Israelis receive a COVID-19 vaccine in a mobile Magen David Station at the Mahane Yehuda Market in Jerusalem on February 22, 2021. (Olivier Fitoussi/Flash90)

The number of serious cases on Tuesday stood at 798, the lowest recorded number since the beginning of the year, after it climbed to an all-time high of 1,201 in mid-January.

Ministry data showed there were 41,487 active virus cases, including 4,677 infections diagnosed on Monday, bringing the total since the start of the pandemic to 757,150.