Tali was 38 weeks pregnant when her water broke in the middle of the night. With the nearest hospital a 30-minute drive away, and unsure if the contractions were real, her doula told her there was no immediate need to rush. “If you can talk on the phone you’re not in active labor,” the doula reassured her.

Unexpectedly, Tali’s contractions increased rapidly. Believing she and her husband Danny still had time to drive to the hospital, they packed up their car and started their journey. As luck would have it, an unexpected roadblock in which police were checking cars one by one had been set up on the highway from Modiin to Tel Aviv.

Danny, a volunteer EMT with Magen David Adom, knew they would never make it to the hospital in time. He pulled off at the nearest exit and, with his wife’s screams in the background, called the MDA emergency hotline.

To make matters worse, Danny had dropped his new phone in water hours earlier and switched to an older phone with no GPS. Unable to pinpoint the exact location using the technology MDA developed for just such a scenario, the dispatcher, a trained EMT, waited on the line until Danny could hear the sirens of the ambulance approaching.

The mobile intensive care unit (MICU) ambulance staffed with two paramedics found them. As they evacuated Tali into the ambulance, they told Danny to follow by car with clear instructions to obey the rules of the road. The ambulance with it’s siren and lights on drove their intersections. On his way, Danny passed an ambulance with flashing lights on the side of the road and realized that it was the one his wife was in.

Quickly parking the car in front of the ambulance, he opened the doors of the ambulance, to see the head of his daughter crowning. Overcome with emotion, he helped the paramedics, Eyal Roth and Arin Tagger, deliver his baby girl, Eden.

“I have been involved as a volunteer with MDA in some capacity for more than five years,” said Danny. “And for the past two and a half years, I have been a volunteer EMT and driver and have yet to experience a birth in an ambulance.

“I was overwhelmed with emotions — joy and worry, relief and anxiety — as I witnessed the birth of my daughter on the side of the road in the middle of the night.”

Tali and baby Eden were transported to Shamir Medical Center and the entire Zarek family is doing well.

Recently, Danny and Eden reunited with Eyal Roth, one of the paramedics who delivered the baby, and Eli Bin, the director of MDA. 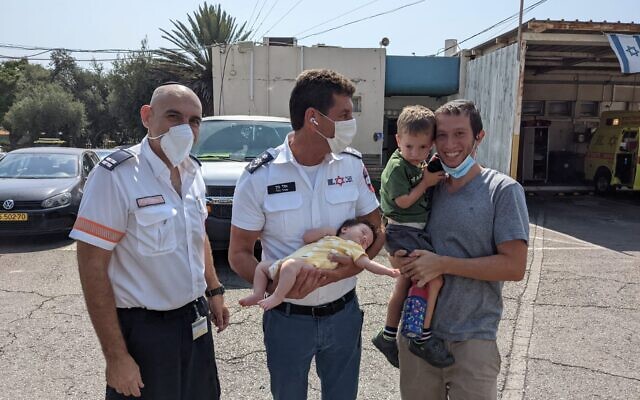 “We met Tali and Danny on the side of the highway at 2:30 a.m., coming back from a successful CPR on an elderly patient,” Roth recalled. “Tali pleaded for an epidural.” He laughed, “The baby didn’t want to wait for a hospital. On the side of the road, baby girl Eden was born.”

“I am so grateful to Eyal and Arin and to Magen David Adom, an organization I am honored to be part of,” said Danny. “I never imagined that I would be a recipient of the medical emergency service I am so committed to providing for those in need.”

Danny Zarek works on the business team at The Times of Israel.