Eli Avidar, the maverick MK of Yisrael Beytenu, is reportedly set to be appointed a government minister, in an effort to annul his threat of voting against the coalition on key issues and to bolster the government’s power in the Knesset.

Avidar will be made a minister within the Prime Minister’s Office, with him eventually taking over as intelligence minister from Elazar Stern of Yesh Atid, Walla news reported Thursday. Stern is said to be planning to leave the Knesset to become head of the Jewish Agency for Israel in a move backed by the new government.

The appointment of Avidar as a minister was pushed by Prime Minister Naftali Bennett and Foreign Minister Yair Lapid, with Yisrael Beytenu chair and Finance Minister Avigdor Liberman initially opposing it but ultimately changing his mind this week, the report said.

On the day of the new government’s swearing-in last month, Avidar said he would no longer vote along party lines, retaliating after Liberman did not grant his choice of ministerial posts.

Liberman, who was set to be named finance minister, offered Avidar the position of a minister within his office. The latter declined, recognizing that he would have little independence in such a position. He asked Liberman to name him either agriculture minister or minister of the Negev and the Galilee, but Liberman combined the two portfolios into one and handed it to the party’s No. 2 Oded Forer.

Meanwhile, the party’s No. 6 MK Hamad Amar was given the position of minister within the Finance Ministry, which Avidar had refused. And Alex Kushnir, seventh on the party list, was tapped as chairman of the Knesset’s powerful Finance Committee.

Though he later said he was committed to the government, Avidar has since come out against coalition legislation, with his resistance causing headaches for the government that has a paper-thin majority in parliament.

The government, a diverse mix of eight parties from across the political spectrum, has struggled to maintain its majority in the Knesset on key legislation amid bickering and dissent within its ranks that led to it losing some valued votes to the opposition.

In addition to Avidar’s reported imminent appointment, the coalition has also decided to make Meretz MK Yair Golan deputy economy minister, the ministry announced on Thursday, amid efforts by the ruling coalition to overcome a stalemate in the Knesset that has prevented it from advancing legislation.

In return for Golan moving to the ministry, he will hand over his position as chair of the Knesset Immigration, Absorption and Diaspora Affairs Committee to the opposition, Israeli media reported.

The development is part of an emerging understanding between the government and the opposition aimed at amending the balance of power on key Knesset committees, reducing the coalition’s majority, Channel 12 news reported. 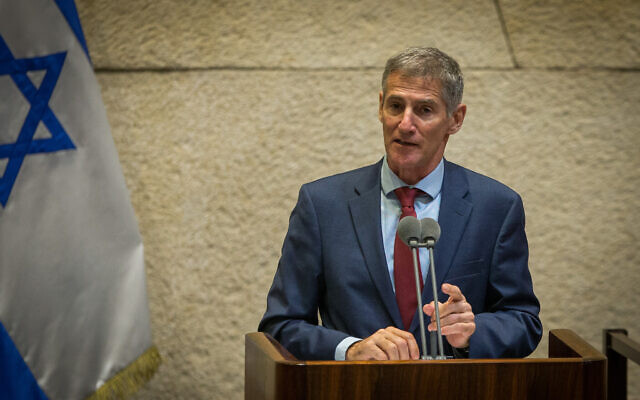 Opposition parties have complained that they are not chairing any of the key Knesset committees. According to Channel 12, as part of an agreement with the opposition, control of one committee is to be handed to the opposition. In addition, the government majority on other committees is to be reduced from two lawmakers to just one, according to the report.

Golan is a retired major general who once held the position of deputy commander of the Israel Defense Forces.

Economy Minister Orna Barbivai of the Yesh Atid party welcomed the appointment, saying in a statement, “Yair Golan, an excellent man of action, I am sure we will work in full cooperation to advance economics and industry in the country.”