Hundreds of people turned out on Sunday for a rally against antisemitism on the National Mall next to the Capitol Building in Washington, DC.

The event was held on the backdrop of rising antisemitic violence in the US, unleashed during the May war between Israel and terror groups in Gaza.

In addition to attacks on Jews related to the Israel-Hamas conflict, recent assaults on Jews include the stabbing of a Boston rabbi and bullets fired through synagogue windows. Dozens of Jewish institutions have been vandalized across the US since May, including Holocaust museums, Chabad houses, and schools.

Meghan McCain, the daughter of the late Sen. John McCain, was one of many speakers to address the crowd.

“We will not let [antisemitism] happen here in the United States of America,” said McCain. “We cannot be quiet, we cannot be silent, and first and foremost above all else, we cannot be scared. I’m here to tell all of you, you’re not alone… I’m not Jewish, but I can see how scary it is.”

McCain stressed the importance of calling out antisemitism on both the right and the left, and said increasingly people are unable to condemn hatred of Jews “in their own party.”

The event, titled “No Fear: A Rally in Solidarity With The Jewish People,” was billed as a “big tent” unity rally with dozens of sponsoring organizations. The main organizer, the relatively unknown Alliance For Israel, signed on most mainstream Jewish groups including the Jewish Federations of North America, the Anti-Defamation League, the American Jewish Committee, B’nai Brith International, the Jewish National Fund, Hadassah, and the Combat Antisemitism Movement, among many others.

The chairs of both the Republican Jewish Coalition — former Sen. Norm Coleman — and the Jewish Democratic Council of America, former Congressman Ron Klein, took the stage together to address the gathering.

Meghan McCain speaks at the ‘NO FEAR: Rally in Solidarity with the Jewish People’ event in Washington, July 11, 2021. (AP Photo/Susan Walsh)

“The fight against antisemitism is not a partisan issue,” declared Coleman. “We stand united in the belief that each of us has a responsibility to call out antisemitism in the political arena, whether it is in our own party or whether it rears its ugly face on the other side of the aisle.”

“Antisemitism has no place in America or anywhere in the world,” said Klein. “From this day forward, we must continue to stand together in this fight.”

Rabbi Shlomo Noginski, who was stabbed outside a Boston Jewish school earlier this month, also spoke to the crowd. Other speakers included Israeli-American actress and author Noa Tishby; Elisha Wiesel, the son of the late Holocaust survivor Elie Wiesel; and Rabbi Jeffrey Myers of the Tree of Life Synagogue in Pittsburgh, Pennsylvania. 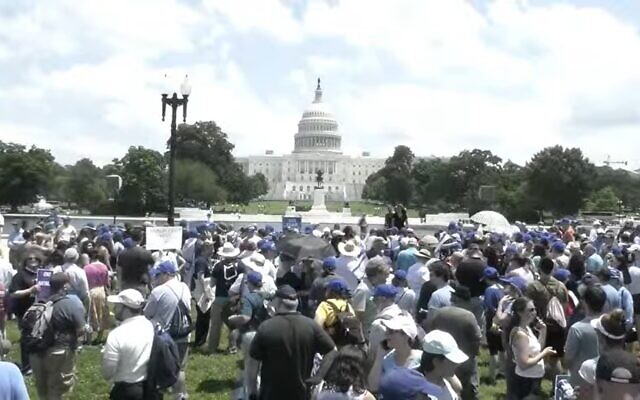 The ‘No Fear’ rally against antisemitism on July 11, 2021, in Washington, DC. (Screenshot)

“None of us should need to be at a rally against antisemitism in 2021,” said Ron Halber, executive director of the Jewish Community Relations Council of Greater Washington. “But we do need to be here. Because we must again respond to vile rhetoric, physical attacks and symbols of hatred against our people.”

Sacha Roytman-Dratwa, director of The Combat Antisemitism Movement, said the gathering sent a message to the world.

“Today’s event sent a powerful message that Jew-hatred simply will not be tolerated,” he said. “Jews from across the religious and political spectrum are ready to take action as one, to ensure that antisemitism is not allowed to flourish.”

Rally organizers proclaimed “our tent is big,” on the event’s website. “We welcome all Zionist, Jewish organizations, and allies. If you believe we have a right to exist in peace and security as a Jewish people both here in the United States and in Israel, then you belong with us.”

But the “big tent” failed to attract support from a range of left-wing Jewish organizations, reported JTA last week.

J Street, Americans for Peace Now, and T’ruah declined to co-sponsor the rally in part due to the presence of far-right organizations including the Zionist Organization of America and StandWithUs.

Matt Lebovic contributed to this report.