Three young Israeli filmmakers flew into Nigeria last month to make a documentary on Jewish Igbo communities in the southeastern part of the African country.

Within days, they found themselves locked in a dark cage reeking of urine, having been caught up in a highly charged and often lethal religious morass that insiders insist should not be entered lightly.

Why would a film project on Igbo Jews spark an international incident and an arrest by masked Nigerian officers?

Rudy Rochman, a pro-Israel activist with almost 95,000 followers on Instagram, filmmaker Andrew Noam Leibman, and French-Israeli journalist David Benaym were arrested by Nigeria’s internal security agency on July 9 while shooting a documentary in a separatist region of southeast Nigeria.

The Israelis were filming “We Were Never Lost,”  a documentary exploring Jewish communities in African countries such as Kenya, Madagascar, Uganda, Tanzania, Zimbabwe, and Nigeria.

“The goal of the documentary is to tell the stories, the struggles, and aspirations of unknown communities of Jews around the world,” Rochman told The Times of Israel Sunday.

But instead, agents from Nigeria’s Department of State Services interrogated the trio on suspicion that they had come in contact with Biafran separatists.

The Igbo are a meta-ethnic group of some 30 million in southeastern Nigeria.

There have been claims of Jewish descent by the Igbo for hundreds of years.

The furthest back the claim can be traced is to the best-selling 1789 autobiography, “The Interesting Narrative of the Life of Olaudah Equiano: Written by Himself,” in which a freed slave of Igbo descent points out the many similarities between Igbo and Jewish practice, including circumcision, animal sacrifice, and ritual purification. Equiano also lays out — rather inaccurately — the contemporary biblical scholarship that he claims argues for Jewish descent among the Igbo. 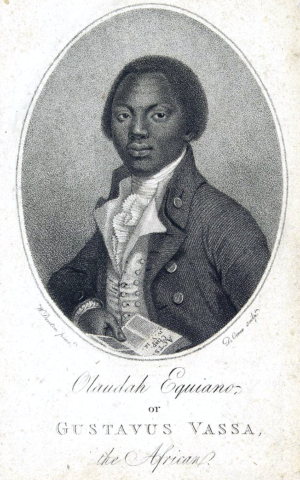 But Equiano was writing an abolitionist tract cleverly designed to win over the sympathy of white European Christians; one way to do so was to purport a biblical, non-African ancestry for his people.

Many Igbo continue to claim Jewish ancestry, and a number of Judaic movements have sprung up in Nigeria, as they have across sub-Saharan Africa. Some movements simply claim Israelite lineage and adopt certain Jewish garments while maintaining their Christian beliefs. A small minority of Igbo are in the process of learning about mainstream Judaism and bringing their own beliefs and customs in line with accepted Jewish praxis.

But, like other religions in Nigeria, claims of Jewish descent have become tied up in fraught political issues.

The separatist Indigenous People of Biafra movement, founded in 2012 by Nnamni Kanu, seeks an Igbo state in southeastern Nigeria, where an independent Biafra survived for three years during the bloody Nigerian civil war in 1967-1970.

The IPOB is classified by Nigeria as a terrorist organization, and Nigerian forces have used lethal force on the organization’s supporters.

Kanu maintains the Igbo people are a lost tribe of Israel and it is his mission to lead them to the promised land of Biafra. 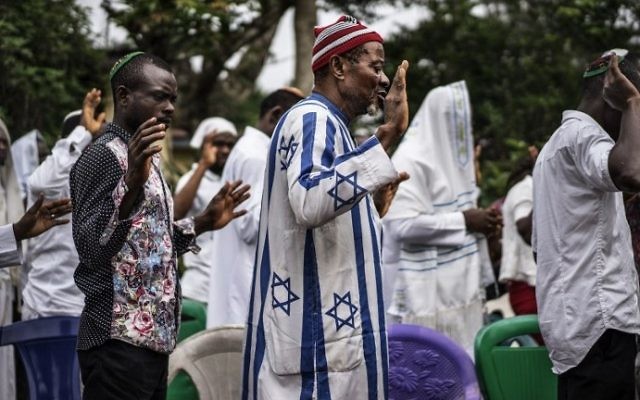 Supporters of the Indigenous People of Biafra (IPOB), members of the Yahveh Yashua Synagogue (Yisraelities Biafra Region) celebrate Shabbat outside the residence of the movement’s leader Nnamdi Kanu in Umuahia, on May 27, 2017. (AFP PHOTO / MARCO LONGARI)

Jewish garb and symbols are central to Kanu’s persona. After he was released from detention in 2017, his bail documents were signed by a man who styled himself the “Jewish Chief High Priest,” Immanuu-El Shalom Oka-Ben Madu.

During the hearing, the judge asked what religion Kanu belongs to.

“My Lord, I believe in Judaism,” said Kanu.

The next year, after not being seen for a year, Kanu said he was in Israel after associates aired footage of him in a kippah and prayer shawl praying at the Western Wall. 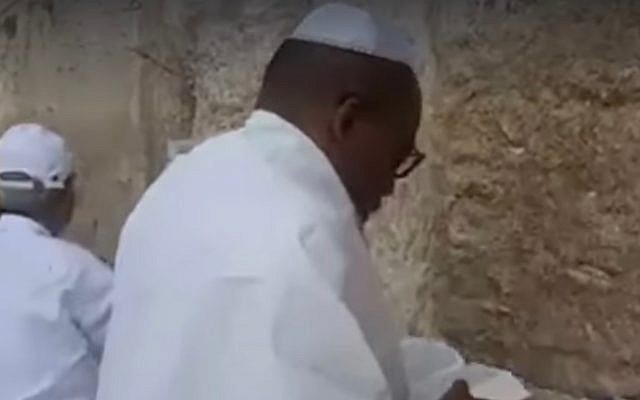 “I owe my survival to the State of Israel,” he added, referencing the country’s Mossad spy agency but without specifying what kind of support Israeli authorities may have given him.

Kanu was arrested by Interpol in the Czech Republic in June 2021.

The Judaism Fellowship Initiative, which represents the communities in Nigeria seeking to adopt mainstream Jewish practices and gain acceptance by Jewish communities and institutions around the world, feels that the IPOB  Jewish claims endanger them and insert Jews into a local conflict.

“The Jews don’t evangelize, the Jews don’t look for converts but by the activities of Mazi Nnamdi Kanu, thousands are trooping into our synagogues with the wrong information,” said JFI president Chief Arthur-Regis Odidika to the Nigerian daily Vanguard.

“These people see Judaism as a militant religion, war religion but Judaism is a religion that teaches love and peace which is why our greeting in Judaism is shalom, meaning peace,” he continued.

“They are constantly being overwhelmed by IPOB, who claim that their Judaism equals Biafra,” said a diplomatic source in Nigeria. 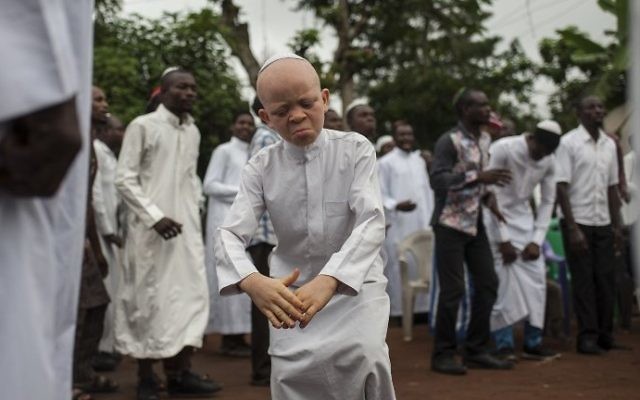 A boy dances during Shabbat celebration gathering Indigenous People of Biafra (IPOB) militants and members of the Yahveh Yashua Synagogue (Yisraelities Biafra Region) outside the house of the movement’s leader Nnamdi Kanu, in Umuahai on May 27, 2017. (AFP PHOTO / STEFAN HEUNIS)

In a country like Nigeria, that kind of association can be dangerous.

Nigeria is an extremely religious country, and locals follow religious leaders closely. Nigerian evangelists and firebrand imams have the power to incite violence, while religious figures have also been central to forming peacebuilding committees.

“Religion and politics are tightly interwoven in this country,” said the diplomatic source.

“The people in Nigeria know very well that religion is a touchstone for other countries to criticize Nigeria based on human rights.”

With a Muslim president, Muhammadu Buhari, in office, many Christians appeal to Christian groups around the world with claims of genocide. While Christians are unquestionably caught up in violence, it is mostly due to tensions between herders and farmers, criminal activity, and ethnic — not religious — strife.

The three Israeli filmmakers discovered how sensitive the Nigerian religious context is.

They had planned to film their episode on Igbo Jews over the course of their 13-day trip, but things turned very quickly. 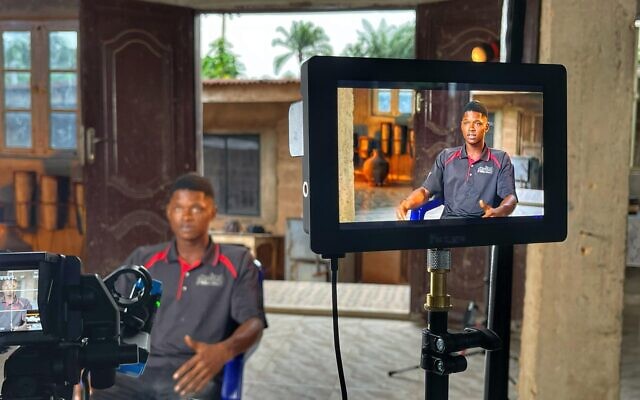 “We were only in touch with the fully Jewish, practicing communities,” noted Rochman.

They had been in touch with contacts who had visited Nigerian Jewish communities, and said they were cognizant of the dangers.

On Friday morning, July 9, the filmmakers were in an Igbo synagogue, preparing their equipment for the day’s filming. Around them, the community was preparing for a youth Shabbat weekend. 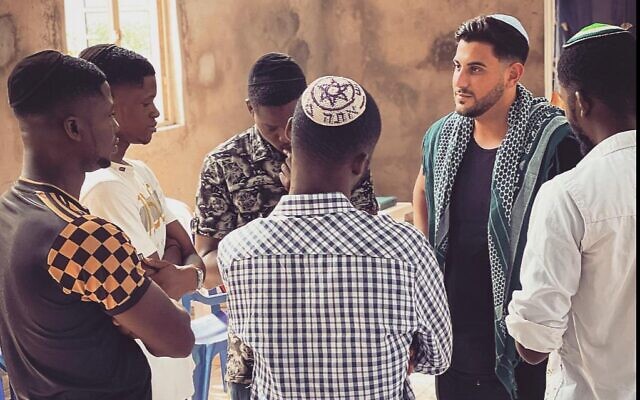 At 7:30 a.m., 15 minutes before the trio was slated to set off for the day, their local fixer called them saying that the police were waiting for them downstairs and they had to go meet them with their phones and passports.

The filmmakers had a good idea of why the police wanted to talk to them. The previous day, pro-separatist activists had written posts on social media claiming that the trio were Israeli agents coming to show Jerusalem’s support for Biafran separatists.

The agents told the men that they were “invited” to a quick conversation with their commander, and would then be returned to the synagogue.

“They didn’t want to officially arrest us because then they would have to provide us with certain rights, like a phone call and a lawyer,” Rochman explained.

The police confiscated their phones and passports, and forced each Israeli into a separate van.

Their first conversation with the station chief was fairly amicable, as they explained they had no political motives and were merely filming a documentary about Igbo Jews. The chief even promised that they would be sent back to the synagogue to help prepare for Shabbat, and would resume the conversation on Sunday. 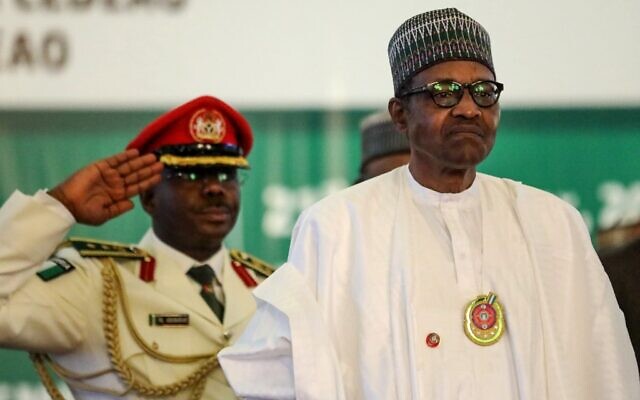 But as the day wore on, it became increasingly obvious that things were moving in a very different direction. The three were interrogated separately and aggressively.

They realized they were going to spend Shabbat in a holding cell, and asked for some grapes and crackers on which to make the ritual blessings over wine and bread.

The next morning, the guards woke the men up and at gunpoint ushered them into one van. They sped for nine hours until they reached the GSS headquarters in Abuja, Nigeria’s capital, promising that Israeli diplomatic staff and their passport would be awaiting them.

Instead, they were forced to give up their shoes, belts, and jewelry, and were shoved into a small room. 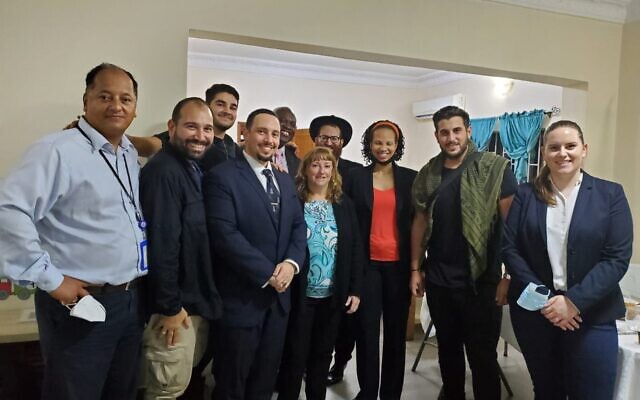 “You could go maybe three or four steps in each direction,” Rochman recounted. “It has bars, it’s completely dark. There are bottles of urine from previous inmates. Bugs all over, it’s dark, it smells, no AC so you’re sweating, you’re sleeping on the floor. There’s writing on the wall from people who clearly spent months there. People who were writing messages as if they knew the next day they’d be executed.”

The Israelis weren’t able to shower for the next five or six days. And when they were allowed to bathe, it was by filling a putrid bucket from the bathroom with water and pouring it over themselves.

After about a week, they were able to meet with the Israeli and American envoys, who arranged for them to receive one kosher meal a day from the local Chabad center. From their meager rations, they would divide a third out to give to a Jewish Igbo woman also being held.

David, a French citizen with an autoimmune disease, spent his nights at the hospital after the first week and returned during the day for interrogations.

Rudy and Noam were later transferred to a larger cage, but one that contained two Nigerians held on terrorism and weapons charges.

“We were on edge in every way at all times,” Rochman said. “If they had told us at the beginning that we’d be there for twenty days, that would be much better, since at least we’d be counting down the days.”

“Still, we were not putting our heads down. We were looking for ways to make a weapon, to have something on us in case someone attacked us, to try to undo the lock, to try to find a way to steal a phone.”

Rochman managed to sneak a small pair of scissors from a toiletry bag into the cell for protection.

On the tenth day, the Israelis were on their way to the first floor of the prison to pick up their kosher food. When they passed by the lobby, they began shouting to civilian visitors that they were innocent and being held unlawfully.

They were dragged back to the cages by guards. 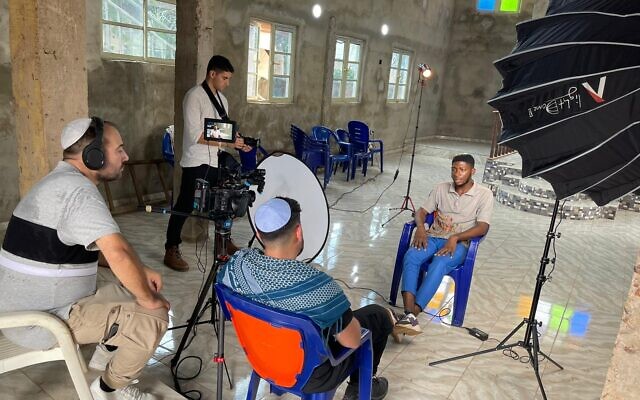 Nigerian authorities released the trio from prison last Tuesday evening and handed them over to US custody. American embassy staff then took them to the local Chabad center to spend the night.

They were given their passports and phones just before their flight took off for Istanbul the next night.

“They wanted to try us with treason and missionary work,” said Rochman. “They were clearly trying to silence this project and send a message that no one should be documenting the Igbos.”

“We came out there to tell a story, and unfortunately we became the story,” Rochman said ruefully. “This is just a fraction and a taste of what Igbos go through daily.”