Nearly two million Israelis have received the third dose of the COVID-19 vaccine, and the effects of the booster campaign are expected to seen over the next few weeks, said a top health expert on Saturday.

Speaking to Channel 12 news Saturday evening, coronavirus statistician Prof. Eran Segal of the Weizmann Institute of Science said that there are indications that the infection rate numbers are trending downward.

“We currently have over 700 people in serious condition, it’s a high number, but this week’s addition was 50 people, the fewest amount in this wave,” he said.

The R number, the basic reproduction number of the virus, stood at 1.1 as of Saturday, but is decreasing, “and may even reach below 1 this coming week,” said Segal. An R rate of 1 indicates that every infected person will infect one other person on average, and a rate above 1 means the virus will spread more rapidly.

In addition, 60,000 previously unvaccinated persons received the jab this week. “It’s a far cry from the one million or so [left to vaccinate] but it is higher than previous weeks and there’s a huge effort on this front.”

Segal pointed to positive developments in the field and said that Israel has built a strong “barrier” against the virus, with close to two million people having received the booster shot in recent weeks, 400,000 having recovered from the virus and having at least some natural immunity, and 300,000 previously unvaccinated people deciding to get vaccinated since the beginning of this month.

Israel is now facing two critical events: the opening of the school year on September 1, and the High Holidays in the coming weeks, when people gather in synagogues and with their families to mark the holidays.

“But we have a million people with a booster shot just in the previous 10 days, we’re not yet seeing the effects of this in the data, but with all this combined, according to my estimation, this will balance any increase in morbidity, and, even if there is an increase in it, we will be able to handle it,” said Segal.

An Israeli teacher receives a dose of the COVID-19 vaccine, at a vaccination center in Jerusalem, on August 24, 2021. (Yonatan Sindel/Flash90)

The computational biologist said that Israel should go ahead and begin the school year this coming week, despite calls to delay it due to the recent virus surge.

Interior Minister Ayelet Shaked told Channel 13 news that there won’t be a national lockdown over the Jewish New Year, which begins on the evening of September 6.

“We’ll spend Rosh Hashanah together with the whole family,” Shaked, a member of Prime Minister Naftali Bennett’s Yamina party, said in an interview. She also predicted that further COVID-19 restrictions won’t be imposed.

Also speaking on Channel 13, coronavirus czar Prof. Salman Zarka said on Saturday that people may be asked to limit gatherings to 50 people indoors and 100 people outdoors during the upcoming holidays.

Israel recorded 8,182 new coronavirus infections on Friday, according to Health Ministry figures released on Saturday, out of over 139,000 tests, pointing to a positivity rate of 6.6 percent — the highest seen since February.

According to the latest figures, Israel currently has 81,217 active infections, with 703 people in serious condition. Of those, 193 are considered critical and 153 are on ventilators.

There have been 1,045,212 verified infections and 6,950 COVID fatalities in the country since the pandemic began.

Officials say that the vast majority of those suffering serious bouts of COVID are unvaccinated, though breakthrough cases among the vaccinated have also become common as immunity has seemingly waned, an issue Israel is seeking to remedy with a booster shot campaign.

More than 1.95 million Israelis have already received a third shot, according to ministry data. The campaign began on August 1 with people over the age of 60, and has since expanded to all Israelis over the age of 40, as well as healthcare workers, teachers, and pregnant women.

Israeli officials are hoping that the booster doses can halt the rise in both new cases and serious cases of COVID, and avert drastic measures, including a national lockdown — which would be Israel’s fourth. 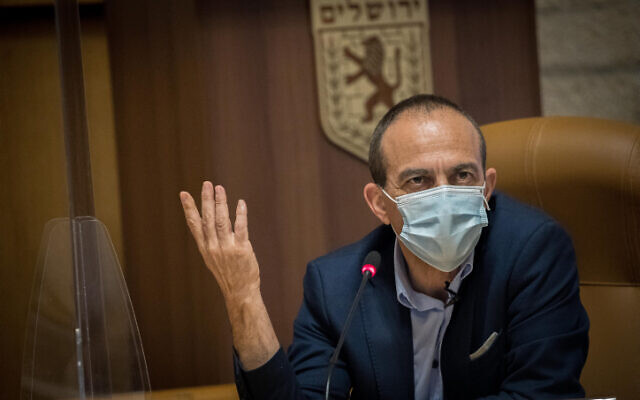 Professor Ronni Gamzu — who served as Israel’s coronavirus czar last summer and fall, when the country was experiencing its second COVID-19 wave — said on Saturday that Israelis would have to learn to live with the virus and that lockdowns should no longer be an option.

Gamzu said that he’d been following the discourse surrounding the recent surge and noted a tendency from the political echelon to immediately consider a lockdown.

“We have to change our tune, no longer weigh a lockdown and get everyone used to living alongside the coronavirus. We need to use everything [at our disposal] including vaccines, testing, rapid testing,” to avoid lockdowns, he said.

Gamzu, who went back to his post as CEO of Tel Aviv Sourasky Medical Center, called to let Israel’s health system handle the increase in infections and assign it a “mission” of doing so with the right resources.

The government of Prime Minister Naftali Bennett has handled this wave well, and even bravely, he indicated. “It’s very courageous, to see the numbers [rising] and to listen to [the experts] and give us the tools we need, [such as the] focus on testing. Israel should be number one in the world for testing, and build a public sector that understands that we have to live alongside the virus,” he said.

Addressing the chaotic rollout of the serological testing campaign for children under 12, who are not yet eligible to get the vaccine, Gamzu said that 300,000 kids were eventually tested this past week.

Long lines and delays at stations offering serological checks for coronavirus antibodies were recorded across the country this week, leading officials to freeze the campaign for a day and only reopen it in areas where morbidity is high.

“It was still an unprecedented campaign” he added.

Gamzu added that Israel does not need additional restrictions and should re-open the country to tourists, saying that officials need to revisit this issue and provide solutions that are appropriate for the moment.

“We will see more increases, more waves… we need to deal with them. We have a strong health system, a smart health system, the public understands. We need to rid the word ‘lockdown’ from our lexicon. It’s the way. We need to return to living life, carefully and with testing, but return to normal,” he said.