Inspectors have carried out a biannual safety inspection and maintenance of the Western Wall, with rabbis overseeing the injection of preservation materials into the corroding stone, the Israel Antiquities Authority said Monday.

“We have an ‘identity card’ for each of the hundreds of stones in the plaza and monitor dozens of features,” said Yossi Vaknin, head conservator for the IAA at the Western Wall.

“We do not drill into the stone, but delicately inject dissolved stone into the gaps and fissures… It is the best possible method of ‘healing’ the stones and the ultimate defense against weathering for the most important stones in the world,” he said.

Vaknin added that the work was carefully done to ensure the preservation of the plants that have taken root in the stones of the wall, as well as the birds that nest in its boulders.

“We also preserve this ecosystem while guaranteeing the stones’ stability, thus ensuring that the Western Wall will remain strong for at least 2,000 more years,” Vaknin said.

The stones are inspected twice a year — once before Passover and a second time in the run-up to the fall High Holidays — to ensure the continued safety of visitors to the site, the Western Wall Heritage Foundation said in a statement.

“Although this year, in the shadow of COVID-19, people are increasingly ‘visiting’ the Western Wall virtually, we are already preparing for the return of visitors to the wall,” said Mordechai Eliav, director of the foundation. 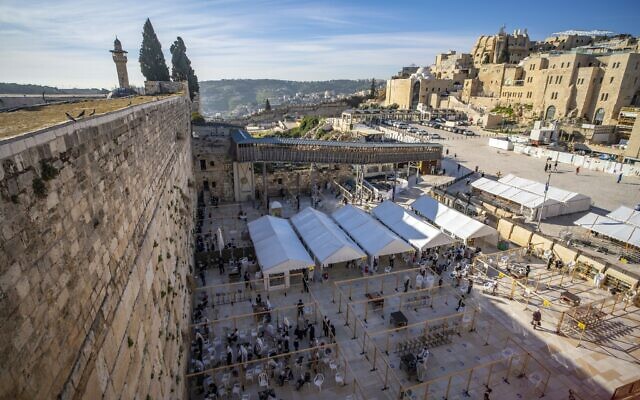 In 2018, a large boulder from the wall became dislodged from the ancient structure, tumbling down onto an egalitarian prayer platform. There were no injuries in the incident near Robinson’s Arch, south of the main prayer plaza, but the rock landed very close to a female worshiper and damaged the platform where she was praying. 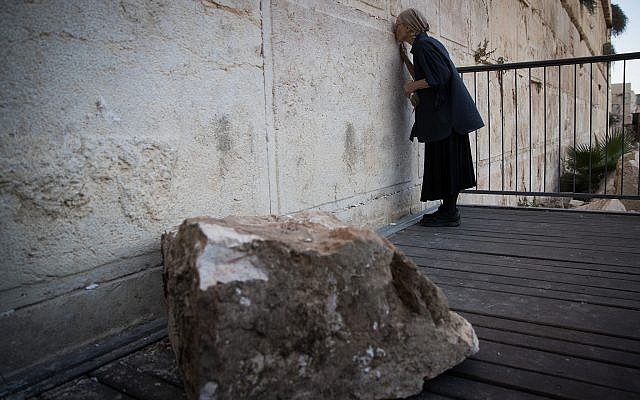 Daniella Goldberg stands later on Monday, July 23, 2018, at the site where a large chunk of stone dislodged from the Western Wall in Jerusalem Old City that day, at the mixed-gender prayer section. The boulder fell close to where she was praying. (Yonatan Sindel/Flash90)

In another notable case in 2004, large pieces of Western Wall stone fell in the mainstream prayer plaza — slightly injuring a worshiper on Yom Kippur — due to erosion caused by foreign metal objects inserted into the wall’s cracks by birds.

Amanda Borschel-Dan contributed to this report.