This winter’s rainfall split Israel into two separate entities, with one receiving average or higher rain, and the other experiencing severe drought, figures show.

An imaginary boundary ran east-west across the Beit Kama Junction, located more or less equidistant between the southern cities of Kiryat Gat and Beersheba.

A year is considered a drought year when it sees less than 70% of the average annual precipitation.

Even in the so-called Gaza envelope of agricultural communities that run along the Gaza border, umbrellas were rarely opened this winter. Rainfall there averages an annual 200-250 mm (7.9 to 9.8 inches), but at the Besor spring, 116 mm (4.6 inches) fell, which is 54% of the yearly average.

Gili Molcho of Kibbutz Mishmar Hanegev, a member of the agriculture committee, said, “We saw the floods in the center and north [of Israel] on TV and felt like we were living in another country.”

“The desert line was very distinct this year,” said Amir Givati, a climate expert and lecturer at Tel Aviv University’s School of Environmental Studies. “While in the north, everything is green, south of Beit Kama, everything turned yellow already in March. Fires will start soon.

“We’re talking about 50% of the country’s land that has experienced full drought. Rainfed crops are in big trouble. Farmers have to pay much more for water to replace the rain that has not fallen.”

Givati ​​sees a close link between the weather this past winter and global climate change. “It was an irregular year,” he said. “It all started with the summer being insanely hot, with September being one of the hottest ever and with October being completely dry.” 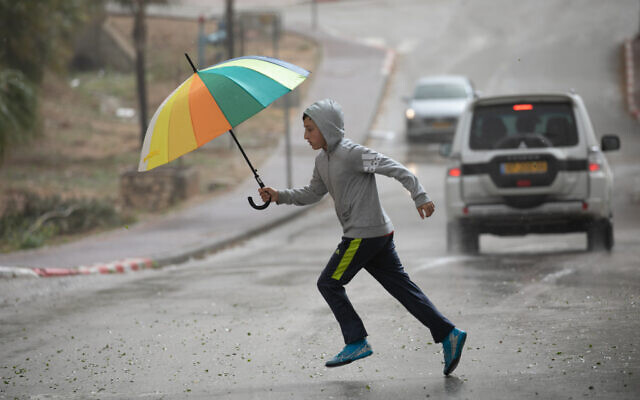 A boy with an umbrella crosses a road in Moshav Yashresh, in central Israel, March 24, 2021. (Yossi Aloni/Flash90)

“The sea warmed considerably. In early November the sea was three degrees warmer than its average temperature at this time of year. This is an amazing figure. Then, in early November, cold air came in from Europe. This met the hot air above our sea, and the conditions ripened for what I call a ‘Mediterranean monsoon.’ The hot air can contain a huge amount of water vapor and this creates incidents of heavy rain near the sea.

“It’s no coincidence that all the floods and storms were in the coastal cities,” Givati went on. “The intensity already wears off 20 km (12.4 miles) inland, to the east of the coast. Between early November and mid-December, there were four such [heavy rain] incidents. Almost all the year’s rain fell during this period. After that, very little rain fell, and the south, which in a regular year is supposed to reach the climax of its rains in January, remained totally dry.”

Asked whether this was all part of the general climate upheaval, Givati said, “It’s unequivocally part of the general madness. There are those who are afraid to say it, but when you see the sequence of events and connect physics to statistics, there is no room for doubt.”

Molcho, of Mishmar Hanegev said, “I spend a lot of time on my bike and I see that the fields that are not being artificially irrigated are just low. In the areas that are irrigated there is still some light green, where not everything is already completely yellow.” 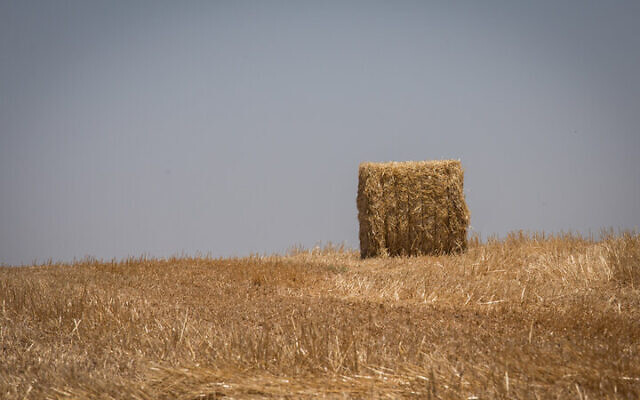 File photo of a wheat field close to the border with the Gaza Strip. (Nati Shochat, Flash90)

He added, “Kibbutz Nirim, which grows 13,000 dunams of wheat, has decided to cut all its wheat early to make hay and cattle feed. Letting the wheat continue to grow is simply not economical.

“The government is offering compensation of NIS 50 ($15) per dunam (a quarter acre) to those who cut the wheat before the season of incendiary balloons [helium balloons carrying flammable or explosive devices] starts from Gaza, and this year, because of expectations of a weak harvest, there was no hesitation. Continuing to grow wheat is simply not economical.”

“It’s been a very difficult year in the south. I do not remember any normal rain. Once in a while, there are small rain events, with very large gaps between them. Last winter was good, but this year there’ll be less than half of the wheat.”

A version of this article originally appeared on The Times of Israel’s Hebrew sister site, Zman Israel.