The Health Ministry said on Thursday morning that 688 new coronavirus cases were confirmed a day earlier.

The last time the number of new daily cases was below 700 was June 28, as the second wave of the coronavirus started to kick in.

Thursday’s data also marked the milestone of Israel staying below 1,000 daily infections for a full week, a level cited by some health officials as a necessary rate for the country to take the next steps in its exit from a national lockdown.

A 2.1 percent share of 33,295 tests carried out on Wednesday came back positive, the lowest rate since late June 21, though the figure is still preliminary. The same level was initially announced on Tuesday but the data for that day was later revised up to 2.2%.

The general decline in number of tests over the past several weeks, however, has led to expressions of concern from health officials.

The total number of infections reported in Israel since the pandemic began rose to 312,787, with 11,914 of them active cases.

Workers from Chevra Kadisha Burial Society prepare a body at a morgue for coronavirus victims, in Holon, on October 28, 2020 (Flash90)

There were 464 COVID-19 patients in serious condition, 199 of them on ventilators, and 104 in moderate condition.

There was no announcement on new fatalities, with the ministry leaving the death toll at 2,494.

The data showed that the city of Tel Aviv had more active coronavirus cases than the nearby predominantly ultra-Orthodox locality of Bnei Brak, long a hotspot for infections. 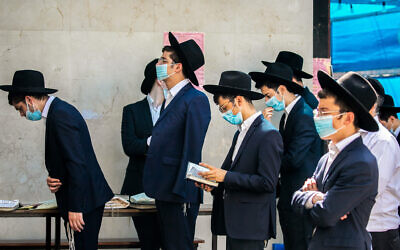 According to the Health Ministry there were 552 active patients in Tel Aviv and 530 in Bnei Brak.

The Bnei Brak municipality announced on Tuesday that low infection rates meant that it was now classified as a “green” city under the Health Ministry’s so-called traffic light system.

The Health Ministry figures were announced as ministers met Thursday morning to continue mapping Israel’s exit from its second national lockdown with the debate expected to focus on the reopening of places of worship and stores.

Prime Minister Benjamin Netanyahu told the so-called coronavirus cabinet that Israelis should expect to be wearing masks for the next year, according to leaks to Hebrew-language media, and that therefore there should be investment in that technology.

“A user-friendly mask must be found. It is important to invest money here in designing easy-to-wear masks,” Netanyahu reportedly said. 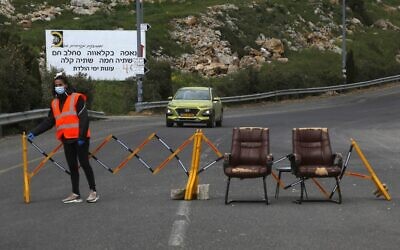 A woman stands next to a makeshift checkpoint in the Druze village of Majdal Shams in the Golan Heights on April 9, 2020. (JALAA MAREY / AFP)

Additionally, outgoing coronavirus czar Ronni Gamzu told ministers that the closure on the northern Druze town of Majdal Shams should be extended as infection rates had not dropped sufficiently.

Furthermore, Gamzu proposed that a closure be imposed on the northern locality of Bu’eine Nujeidat, which has also seen a rise in cases.

According to data released by the Health Ministry on Thursday, Majdal Shams and Bu’eine Nujeidat have the highest per capita rates of active cases.