In an extraordinary 90-minute press conference at the Republican National Committee in Washington, Giuliani and other members of Trump’s legal team left no doubt they were refusing to acknowledge President-elect Biden’s win, arguing instead that a broad “national conspiracy” to deny Trump reelection was underway.

Giuliani opened with a frontal attack on “corrupt” Democratic-led cities like Detroit he accused of purposely flipping thousands of votes to Biden, spoke of “a plan from a centralized place to execute” voter fraud, and warned of an “iron curtain of censorship” denying the American people facts about the election.

Then it turned bizarre. “Did you all watch ‘My Cousin Vinny’?” asked Giuliani, who proceeded to deliver his best Joe Pesci impersonation, copying the actor’s mafioso persona from the hit 1992 movie.

“How many fingers do I got up?” he groaned, apparently complaining about how far away election monitors were kept from the ballot-counting in swing states like Georgia.

Patting his beading brow with a handkerchief, and with sweat mixed with hair dye dripping down from his temples, Giuliani’s attacks veered towards the outlandish.

“You should be more astounded by the fact that our votes are counted in Germany, and in Spain by a company owned by affiliates of Chavez and Maduro,” Giuliani lectured reporters, referring to Venezuela’s notorious strongman Hugo Chavez, who has been dead for seven years, and the country’s current leftist President Nicolas Maduro.

The company in question is elections software firm Smartmatic, founded in 2000 in Florida by two men born in Venezuela.

Smartmatic’s chairman Mark Malloch-Brown is on the board of the Open Society Foundation begun by billionaire philanthropist George Soros, a Jewish philanthropist recurring bogeyman of right-wing conspiracy theorists.

“My goodness. What do we have to do to get you to give our people the truth?” he said.

Rudy Giuliani stands next to a map during a press conference about various lawsuits related to the 2020 election, inside the Republican National Committee headquarters in Washington, November 19, 2020. (Drew Angerer/Getty Images/AFP)

Accusing Biden’s aides of orchestrating the alleged fraud, Giuliani asserted: “They made significant mistakes, like all crooks do, and we caught them.”

As Giuliani repeated conspiracy theories and discussed the various “pathways to victory” for his boss, Trump reveled in the lawyer’s message as he looked on from the White House, tweeting of “an open and shut case of voter fraud.”

The president’s claims of mass cheating have been debunked by a cybersecurity agency in Trump’s own administration that declared November’s election “the most secure in American history.”

That agency’s head, Chris Krebs, was fired this week by Trump. Like the president, he too was watching Giuliani’s performance.

“That press conference was the most dangerous 1hr 45 minutes of television in American history. And possibly the craziest,” Krebs said on Twitter. 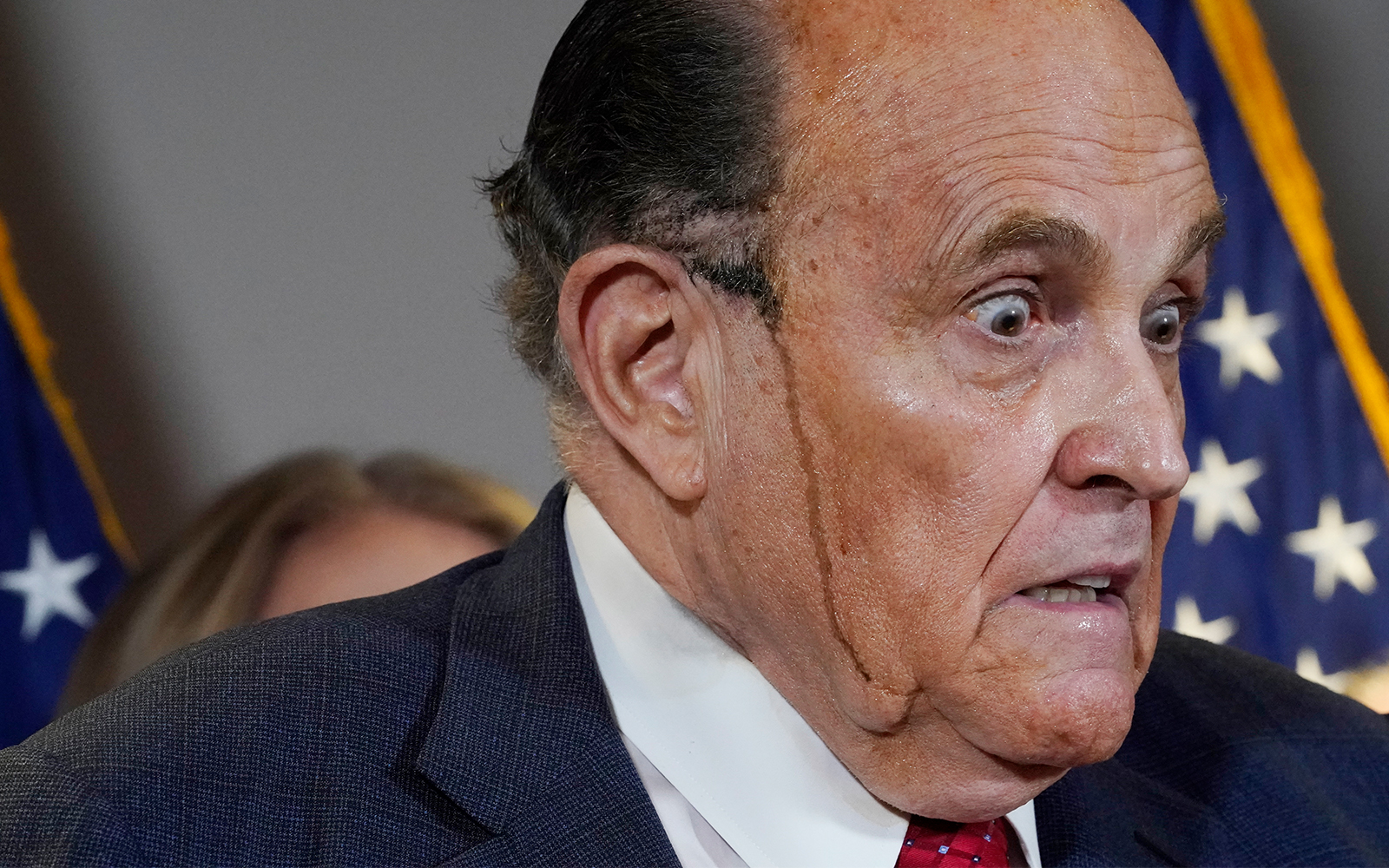 Rudy Giuliani, a lawyer for US President Donald Trump, speaks during a news conference at the Republican National Committee headquarters in Washington, Nov. 19, 2020. (AP Photo/Jacquelyn Martin)

Giuliani, the former mayor of New York, took a dig at a big city rival when he claimed that New Jersey residents crossing state lines to vote in Pennsylvania was “as frequent as getting beaten up at a Philadelphia Eagle football game.”

He and fellow lawyers Sidney Powell, Jenna Ellis and others crowded into a room at the Republican National Convention headquarters, maskless in the midst of a runaway coronavirus pandemic that has killed over 250,000 Americans.

They spent considerable time detailing complaints made in multiple affidavits that allege malfeasance, including from one registered Democrat in Detroit who blew the whistle on fraud she was allegedly asked to perpetrate.

The poll worker who submitted that affidavit, Jessy Jacob, “was basically trained to cheat,” Giuliani said, after holding up copies of the affidavit and challenging journalists to read and report on the legal challenges.

“I don’t know, maybe you could say she’s lying? But you can’t say there’s no evidence,” he added.