With no COVID-19 vaccines in sight for kids and with parents worrying about how schools will restart without mass infections, Israeli innovators are launching tech that they say could stop big classroom outbreaks.

They have been testing special data-gathering thermometers in kindergartens that crunch anonymized data and flag small-but-significant peaks in body temperature. The invention, which is now being launched for worldwide marketing, gave early warning of outbreaks six days before they happened.

“Schools are crowded and kids aren’t vaccinated, but we’ve shown that this device predicts outbreaks, delivering warnings that can be used to take early action to stop the virus circulating around schools,” said Nir Zakay, CEO of Thermoguard, the startup promoting the patent-pending tech in partnership with Sheba Medical Center.

This could range from asking parents to be extra vigilant or increasing social distancing, to temporarily canceling school or suspending lessons in individual classes, he said.

Israeli parents escort their children for the first day of school, during the coronavirus pandemic, in Tel Aviv on September 1, 2020. (JACK GUEZ / AFP)

Adults are being vaccinated in Israel and some other countries, but COVID-19 shots haven’t yet been approved for under-16s. While Pfizer has started a small youth trial, it is expected to be months until this changes — and Israel’s school are expected to resume studies when the lockdown eases in early February.

Using the Thermoguard device in educational establishments gives a picture of the virus situation in the local community beyond the school gates, Zakay said. From early November until early January, the municipality of Ashdod, in southern Israel, used the technology in kindergartens that educate a total of 6,000 children, with parents’ permission. The results warned of outbreaks both in kindergartens and in local populations.

“Six days after the system generated warnings, the neighborhoods where alerts were raised saw a significant rise, 50 to 100 percent, in new daily cases,” Zakay reported. “This show[s] both accuracy in educational establishments, and that by using them as samples, we can predict what will happen among adults.” 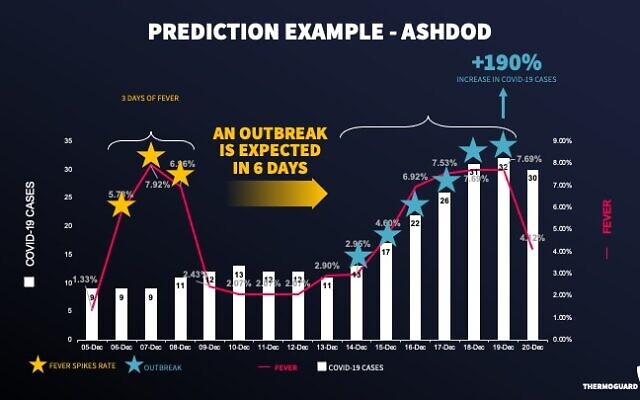 While it is hoped that Israel’s fast vaccination program will reduce or prevent outbreaks among adults, municipalities aren’t taking any chances. The city of Ramat Gan is trialing a COVID early warning system based on Thermoguard, though the project has been paused due to the lockdown. Mayor Carmel Shama Hacohen said: “The technology will enable us to predict outbreaks and hopefully act immediately to stop them before they occur.”

The unit, which looks like a regular digital thermometer, takes temperatures and sends data to the cloud. There is no recorded information on the identify of individuals being measured, though it will be up to organizations deploying the system to seek legal opinions in their jurisdictions regarding how their data is being used. Once collected, data is processed by a special algorithm.

There is a “dashboard” accessible on computers that shows whoever is nominated to carry out monitoring — school principals, city authorities or health officials — the extent to which temperature patterns are normal or abnormal in different areas. The sensitivity of the system, meaning at how big or small a margin alerts are generated, can be adjusted. “With the right action after warnings, we believe that significant outbreaks can be prevented,” said Zakay.

A businessman and former Israeli Air Force intelligence officer, Zakay found himself early in the pandemic thinking about how important live temperature data was during his service, and tried to apply the idea to coronavirus prevention.

He believes that the technology can help societies through the pandemic, and also afterwards to keep other health threats in check. “With the growing evidence of mutations, with countries once again shutting down, this kind of data is now more important than ever,” he said.

“Also, every year, tens of thousands of lives are lost to the seasonal flu, and data analysis like this can prevent it from spreading. After all, what is right for coronavirus is right for other infectious diseases.”