Mansour Abbas, the head of the Islamist coalition party Ra’am, has said that his former partners in the predominantly Arab Joint List cannot be trusted, after at least one of the Joint List’s three factions confirmed it intends to vote against the state budget.

Passing a state budget is key for the new government, with politicians expecting its longevity to hinge on the matter. But with many disparate voices within the coalition, infighting and gridlock are distinct possibilities.

Speaking to Channel 12 on Saturday, Abbas said he would be happy if the Joint List joined the coalition, but that he doesn’t believe that’s feasible at this time.

“I’m not against them, but for now it’s impossible to rely on their word. Sometimes they do tricks and agreements with Likud and the ultra-Orthodox,” he said. “Ultimately the budget will pass with the votes of coalition members and only of coalition members.”

Ra’am ran as part of the Joint List in previous elections, but broke from it over Abbas’s willingness to work with then-premier Benjamin Netanyahu before the March 23 election.

Abbas’s comments came after the Kan public broadcaster reported on Thursday that Joint List officials had told Foreign Minister Yair Lapid they don’t want to see the government brought down, and would consider voting in favor of its new budget proposal in light of the coalition’s razor-thin majority in the Knesset.

As far as the Joint List is concerned, the report said, a right-wing Netanyahu government would be much worse than the current coalition, which is led by hardline Prime Minister Naftali Bennett but also includes centrist and left-wing parties.

The Joint List is also looking to gain influence after Ra’am split away from it ahead of the latest election and then joined the Bennett-Lapid government.

Ra’am argues that it is now the only Arab party capable of advancing reforms to benefit the long-neglected Arab public and that the Joint List’s refusal to cooperate with successive coalitions has rendered it irrelevant.

Channel 12 reported on Friday that ministers held at least three meetings with senior Joint List figures last week, allegedly initiated by the ministers, to warm up relations and potentially recruit the party to support the budget.

But the report said that at least two of the Joint List factions — Hadash and Balad, which have four of the party’s six lawmakers — have already resolved not to vote for the budget, aiming to embarrass the coalition and Ra’am and portray them as unable to deliver on their promises.

The network published what it said was a WhatsApp exchange from an internal Hadash spokesperson group, in which Joint List Chairman Ayman Odeh wrote, “There is no scenario in which we will vote in favor of the budget.”

Another Hadash official urged the party to formally announce that stance — and MK Ofer Cassif reportedly agreed — but another official asked, “What would you get from clarifying that now? Why not remain vague and use that?” 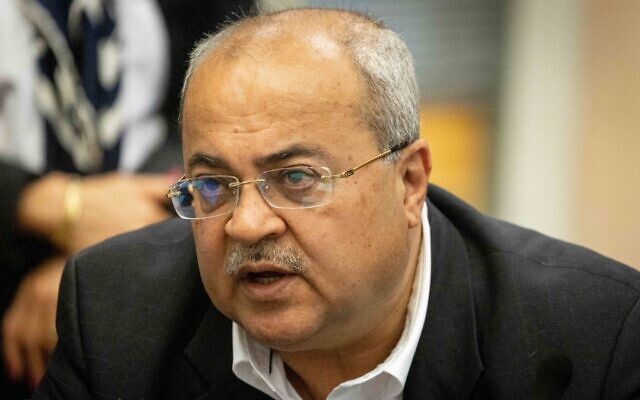 Despite that, the report said the third faction in the Joint List, Ta’al, could eventually support the budget and help it pass. The two Ta’al Knesset members are Ahmad Tibi and Osama Saadi.

Speaking with Channel 12 on Saturday, Odeh confirmed that the reported correspondence was authentic, standing behind his remark that under no circumstances would Hadash support the budget.

“It’s good that what we write on WhatsApp reaches the news broadcast,” Odeh said. “We are against the budget led by [Finance Minister] Avigdor Liberman, a far-right man who wants to raise the retirement age.”

Odeh said his faction opposes a budget “that harms the weak. We will only vote according to our values.”

He attacked Ra’am, alleging that Mansour Abbas “has not brought any results so far.”

“Odeh is using a decades-old approach that hasn’t changed reality, solved crime or brought economic prosperity,” Abbas said. “We are bringing a new approach — working with the government — and slowly things are starting to move forward.” 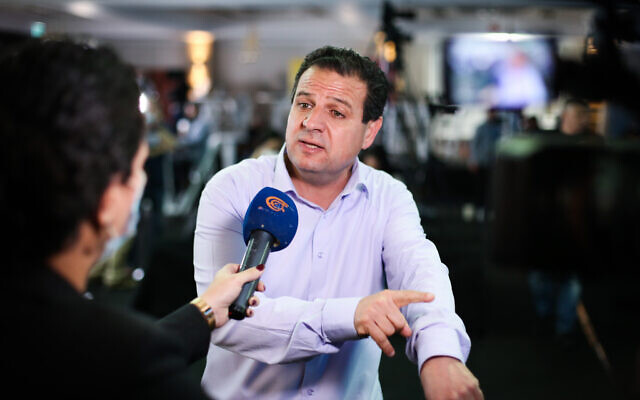 Joint List party chairman Ayman Odeh seen at the party headquarters in the city of Shfaram on election night, on March 23, 2021. (David Cohen/Flash90)

The events of recent days in the Knesset have highlighted the governing coalition’s need for additional votes, as it only holds a razor-thin 61 member majority.

A bill that would have reformed the system for appointing rabbinical court judges failed to pass in its third and final parliamentary vote on Thursday morning because the Knesset speaker accidentally voted against it.

The coalition’s loss came a week after the opposition — with the help of dissenting Yamina MK Amichai Chikli — voted down legislation to extend the government-backed ban on Palestinian family reunification. That vote also ended in a 59-59 tie, with two Ra’am lawmakers abstaining.

Earlier this month, Knesset members voted to extend the deadline for the government to pass a budget, giving it three months from the beginning of the budget year or 145 days from the date of the formation of the government, whichever is later.

In the case of the new coalition, which was sworn in on June 13, it will have to wait until November 4 to pass the 2021 budget.

Israel last approved a state budget for 2019, before it became embroiled in a two-year political gridlock.

In the previous government, then-prime minister Benjamin Netanyahu refused to pass a budget — which allowed him to call elections without coalition partner Defense Minister Benny Gantz immediately becoming transitional prime minister under the terms of their rotation deal.