In it, Farrow, Allen’s adopted daughter with actress Mia Farrow, repeats her allegation that Allen sexually assaulted her in August 1992 when she was seven years old.

The 84-year-old director of “Annie Hall” and “Manhattan” has always denied the abuse and has been cleared of the charges after two separate months-long investigations.

In this April 26, 2016, photo, Dylan Farrow attends the TIME 100 Gala, celebrating the 100 most influential people in the world, at Frederick P. Rose Hall, Jazz at Lincoln Center in New York. (Evan Agostini/Invision/AP)

“These documentarians had no interest in the truth,” Allen and his wife Soon-Yi Previn said in a statement.

“Instead, they spent years surreptitiously collaborating with the Farrows and their enablers to put together a hatchet job riddled with falsehoods.

“As has been known for decades, these allegations are categorically false. Multiple agencies investigated them at the time and found that, whatever Dylan Farrow may have been led to believe, absolutely no abuse had ever taken place,” they added. 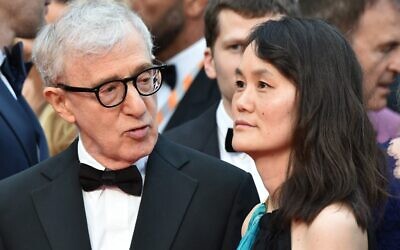 In this photo US director Woody Allen and his wife Soon-Yi Previn pose as they arrive on May 11, 2016 for the screening of the film “Cafe Society” during the opening ceremony of the 69th Cannes Film Festival in Cannes, southern France. (ALBERTO PIZZOLI / AFP)

The statement said that Allen and Previn “were approached less than two months ago and given only a matter of days to respond,” which they declined to do.

“While this shoddy hit piece may gain attention, it does not change the facts,” the statement said.

Many actors have distanced themselves from Allen since the #MeToo movement in 2017 and the publication of a column by Dylan Farrow.

In 2019, Allen settled a multimillion-dollar breach of contract lawsuit against Amazon, which canceled a four-movie deal with him over the longstanding allegations.