Yamina lawmaker Nir Orbach has told associates he intends to back an emerging coalition that would oust long-serving Prime Minister Benjamin Netanyahu, Hebrew media reported Monday, after he spent several days on the fence amid intense pressure from both political camps.

Orbach, who has yet to publicly announce his position on the proposed “change government” his party chief Naftali Bennett agreed to form with Yesh Atid leader Yair Lapid, has been facing demonstrations near his home in Petah Tikva by supporters of Netanyahu calling on him to oppose the nascent coalition.

Another demonstration was taking place Monday evening, and nearby roads were closed off.

The Knesset Guard decided Sunday to up the security around Orbach and fellow Yamina MK Idit Silman after they were targeted by activists.

Bennett was reportedly intending to hand Orbach a senior role in the government, with some reports saying hw would be named settlements minister.

Silman could get the post since she has a good relationship with members of all parties, including the Islamist Ra’am, the sources said.

“I don’t really feel good, there’s a car that’s chasing me on the street,” she told the group. “I’d like to know what you think I can do. They followed me out of the house and are following me everywhere I go.”

A car with a loudspeaker on the roof followed Silman’s vehicle, Channel 12 news reported.

She also pulled her children out of their educational institutions, and Army Radio said they had been “banned” from their youth movements.

On Monday, Channel 12 published a screenshot of a message that Orbach received that day inviting him to his own funeral.

The message said the funeral would be held Monday evening and accused Orbach of having “supported a government that harmed Shabbat and Torah study and brought Reform [Jews] and assimilation to the Holy Land.”

Another message included an invitation for mourners to sit shiva.

Associates of Orbach said in response: “Any protest can be legitimate to a certain point. Sending this message crosses a red line. It is time to come to our senses, lower the flames of hate and advance unity, because what unites us is greater than what separates us.” 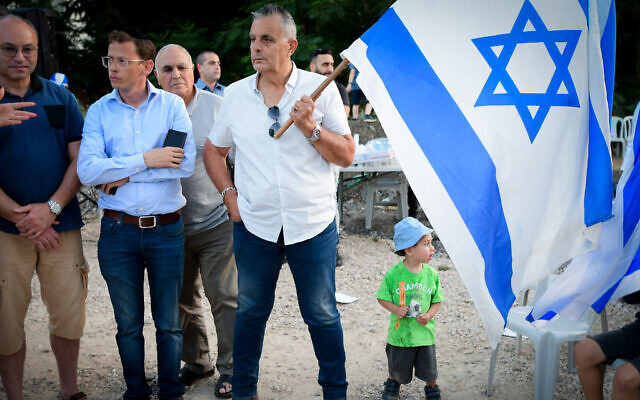 Protesters outside the home of Yamina MK Nir Orbach in Petah Tikva on June 3, 2021 (Avshalom Sassoni/FLASH90)

Orbach, seen as a key swing vote on the coalition, has drawn attention because he has said he may resign from the Knesset rather than back the “change government,” but his replacement would be a Yamina party member who has already declared full support for the coalition.

Supporters of the potential incoming government have faced intense protests and threats over the past week ahead of a Knesset vote on the coalition that must be held by June 14.

At least four of the seven Yamina lawmakers in the Knesset have now been given additional protection amid threats directed at them over the party joining up with MK Yair Lapid and his Yesh Atid party. Party leader Naftali Bennett, the prime minister-designate, and No. 2 Ayelet Shaked had their security beefed up last week. 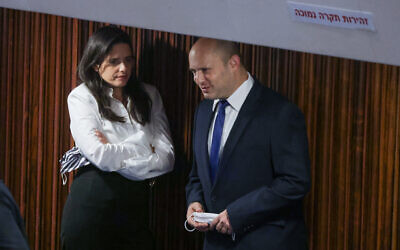 Head of the Yamina party Naftali Bennett, right, and Yamina MK Ayelet Shaked seen in the plenum hall of the Israeli parliament during the voting in the presidential elections, in Jerusalem, June 2, 2021. (Olivier Fitoussi/Flash90)

Heavy pressure on a range of lawmakers who have indicated their support for the coalition is expected to continue until the June 14 deadline. The unprecedentedly diverse alliance of parties numbers 61 members in the 120-seat Knesset, and is thus vulnerable to any single defection.

The wave of threats has also been directed at members of other parties.

Meretz MK Tamar Zandberg, who is slated to become environment minister in the next government, fled her home last week following threats against her and her baby daughter. Uri Zaki, Zandberg’s partner, blamed Netanyahu for the incitement after the prime minister targeted her in a speech he made last week slamming the new coalition. 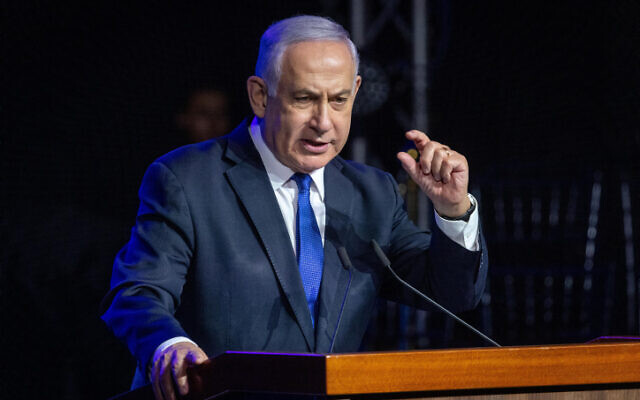 Prime Minister Benjamin Netanyahu speaks during a ceremony to honor medical workers and hospitals for their fight against the COVID-19 epidemic, in Jerusalem, on June 6, 2021 (Olivier Fitoussi/Flash90)

“The principle must be clear and uniform for everyone: Incitement and violence — and incitement to violence — will always be out of bounds,” he said.

“Criticism by the right can’t be treated as incitement and criticism by the left as a legitimate act of free speech. This is an effort to frame the right as something violent and dangerous to democracy,” he said.

Netanyahu also made the unfounded claim that “we are witnesses to the greatest election fraud in the history of the country and in my opinion the history of democracies.”

In a separate development Monday, the central committee of the Labor party overwhelmingly supported party leader Merav Michaeli’s decision to enter the government, with 97 percent of members backing the motion.