Naftali Bennett’s Yamina party said Saturday it seeks to replace Prime Minister Benjamin Netanyahu with its own leader, marking a major challenge from the right to the Likud.

Yamina has surged in polls in recent months, since moving from the coalition to the opposition in the wake of the March elections — taking the number 2 spot behind Netanyahu’s Likud amid growing dissatisfaction with the government’s handling of the coronavirus pandemic and polling in the low twenties in projected Knesset seats (the party currently has just five).

In response to reports of an opposition plan to replace Netanyahu without elections by presenting an alternative coalition, Yamina said it would not support such an effort, saying it had no interest in trading one bad thing for another (in Hebrew, literally: exchanging a treif, or unkosher, animal for a carcass).

“We need to go to elections and replace the failed Netanyahu-Gantz government with a new, broad and energetic government, led by Naftali Bennett,” it said.

Netanyahu’s Likud responded not by attacking Bennett, but by saying it is “saddened and shocked by Bennett’s use of the term ‘treif’ to describe the prime minister.”

The statement called on Bennett to support unity and not “divisive politics.”

According to a Channel 12 report Friday, opposition parties sought to bring Yamina into the fold with the nomination of Yesh Atid-Telem’s Moshe Ya’alon, a right-wing former defense minister, as prime minister, as part of the no-confidence bid.

Netanyahu on Monday brushed off surging support in the polls for Yamina, which has come at the expense of the premier’s Likud.

“I’m not worried about the polls. I never succeed in the polls, only elections,” Netanyahu was quoted as saying in a statement from his Likud party.

He also went after Bennett, who is in the opposition, for voting in favor of a no-confidence motion last week.

“Let him decide if he’s right-wing or not right-wing. I think it astounded many people, it astounded me,” Netanyahu said. “I can understand voting in favor of dispersing the Knesset, but voting for [Opposition Leader] Yair Lapid as prime minister?” 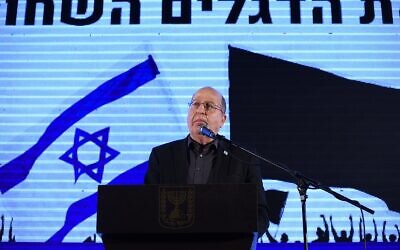 Yamina has dismissed Likud’s criticism of Bennett for backing the measure, saying he was voting to topple the government, not to back Lapid, the leader of the centrist Yesh Atid-Telem.

The growing support for Yamina has come amid significant criticism of Netanyahu for his handling of the COVID-19 pandemic, with a majority of Israelis disapproving of his performance and believing decision-making is being primarily driven by political factors.

According to a pair of television polls on Sunday, Likud would receive 27 seats if elections were held today, down from 36 in the current Knesset. Yamina, meanwhile, was forecast to catapult from its current tally of five seats to 21-24.

Bennett has long had a contentious relationship with Netanyahu but was a part of the prime minister’s right-wing religious bloc until Yamina was left out of the new government when it was formed in May.

Bennett has since sought to portray himself as the level-headed, responsible adult in the room in the face of the coalition’s constant internal bickering.