NEW YORK — As far as Hilary Krieger is concerned, there’s a word missing in the dictionary between orbiculate and orbit. It’s orbisculate [or-bis-kyoo-leyt]: that moment when a citrus fruit accidentally squirts a person in the eye.

But it’s more than a word for Krieger, 44, and her brother Jonathan, 35. It’s become the siblings’ mission to get the word into the dictionary as a way to honor their father Neil, who died last May from COVID-19 at age 78.

“He was whimsical and witty. He had an amazing vocabulary and words were a big part of his life,” Krieger said in a Zoom call, seated behind the desk in her father’s study at her parents’ Boston apartment.

Krieger’s father, a Harvard-trained neuroscientist, went into the hospital at the end of March 2020. Because of COVID restrictions, his wife and children weren’t allowed to visit. Instead, they video chatted daily. The night before he died, the hospital gave them permission to visit. They told him how much they loved him and held his hand.

“The next day the hospital called and put us on the phone with him. The nurses held his hand, and knowing that hearing is the last sense to go, we talked to him, said goodbye, said how much we loved him. We felt we were with him,” Krieger said.

They buried Neil on the first day of May. By this time Massachusetts was under a lockdown, and so they had to have a small funeral. And aside from a small gathering on Zoom with her father’s oldest friends, one of whom he’d known since they were three, there was no shiva, or weeklong Jewish mourning ritual.

The three members of the Krieger family spent the following weeks and months together in quarantine thinking about Neil’s laugh, love of books, respect for Jewish ethics and values, and above all, his zest for life and love of family.

“His motto was to celebrate the moment, something he got from [Jewish theologian Abraham Joshua] Heschel. It was how he lived his life. If there was an opportunity to celebrate, no matter how small or big, then that’s what he did and wanted others to do,” Hilary Krieger said.

Yet, in spite of being able to support each other, Krieger described a crushing void in the immediate weeks following her father’s death. Absent were the routines that can help a grieving person regain their footing.

Then she recalled something Neil had said.

“I remembered how my father said the answer to anything could be found in a book,” she said. “His whole life he loved to read. He had a specific chair in the library for reading and there were always five or six books on the floor near it.”

And so Krieger, an opinion editor at NBC News and former CNN digital editor and reporter for The Jerusalem Post, turned to books to help her understand grief. Of the many volumes she read, the one that most affected her was David Kessler’s “Finding Meaning: The Sixth State of Grief.”

In the book, Kessler explains that finding meaning and purpose can help people climb out of their private pain, anger, or depression.

“It was really helpful in that it gave me a horizon for hope,” Krieger said. 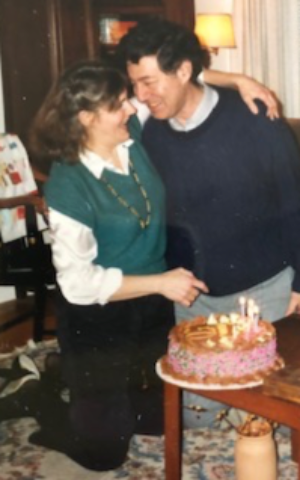 Krieger realized she needed a way to honor the man who played Scrabble with her when she was a child, who was married to her mother for 47 years, who more than anything wanted his family to be happy.

Inspiration soon struck Krieger, who realized that she and her brother should try to get the word “orbisculate” into the dictionary.

Their father had invented the neologism as a freshman at Cornell University. He used it so frequently while they were growing up that the siblings believed it was a “real” word and used it themselves.

So sure was Krieger about the word’s authenticity, she once lost a five-dollar bet to her friend Alex Carey when it turned out “orbisculate” was actually not in the dictionary as she had come to believe.

While the incident remains fresh in Krieger’s mind, her friend of 25 years has a hazier memory of that evening.

“I don’t have a strong recollection of that bet, though it certainly sounds like something she and I would have debated. For obvious reasons, the word had significantly greater resonance for her at the time than it did for me,” Carey told The Times of Israel.

“I will say this: Hilary is someone who can make a compelling argument and is very willing to defend it. Same goes for me. And ‘orbisculate’ sounds like it should be a word, whether it’s in the dictionary or not,” she said. 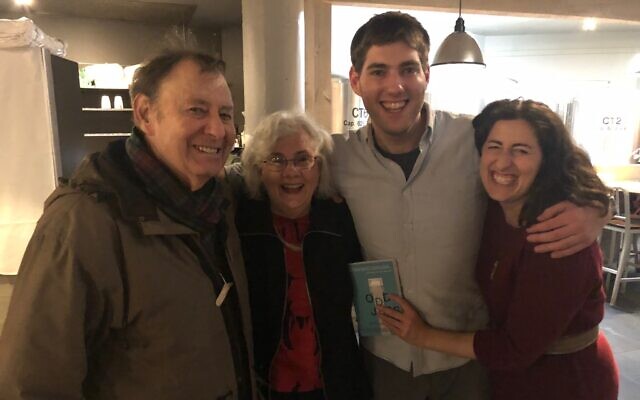 Neil, Susan, Jonathan and Hilary Krieger in Boston as the launch party for Jonathan Krieger’s book ‘Odd Jobs: One Man’s Life Working Every Gig He Could Find, from Bathroom Attendant to Bikini Model.’ (Courtesy)

After that initial embarrassment, Krieger started embracing the made-up word.

“I started saying it to friends, but I would explain that it was a word my dad invented. So now there was a sweet story behind the word and it connected to my dad,” said Krieger.

Following her father’s death, Krieger thought a lot about that connection. After talking it over with her brother, who declined to be interviewed for this story, the two decided to launch a campaign to get the word into the dictionary.

“Hilary’s family was one of the first I knew personally to be affected directly by COVID-19. Neil’s death was tragic and awful and, of course, echoed by the experience of so many families around the country and the world over the last year and more,” said Carey, a practicing psychotherapist. “The choice to mourn by lobbying for a familially invented and nurtured word is one that seems quite organic to the Krieger family.” 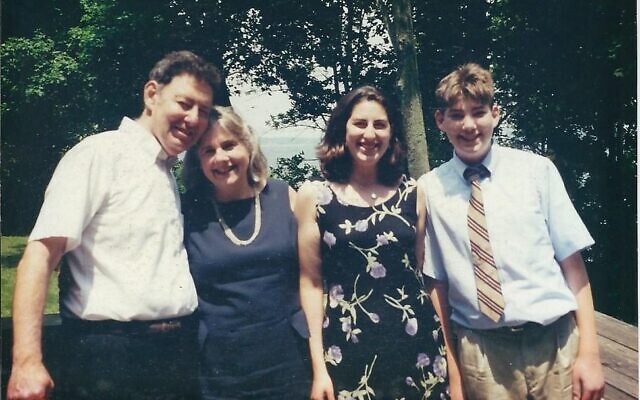 From left: Neil Krieger, Susan Krieger, Hilary Krieger and Jonathan Krieger at a family wedding in Rhode Island in this undated photo. (Courtesy)

After speaking with a language expert, Krieger learned it was possible to get words called “arbitrary coinage” into the dictionary. Unlike Hebrew and French, which have language academies, several words are added each year to the English dictionary.

“The English dictionary is about the words people are using, it’s not what editors think should go in,” Krieger said.

Think recent additions such as Stephen Colbert’s “truthiness,” “amirite,” which solicits agreement or solidarity at the end of an observation, or “hodophobia,” which means an irrational fear of traveling. 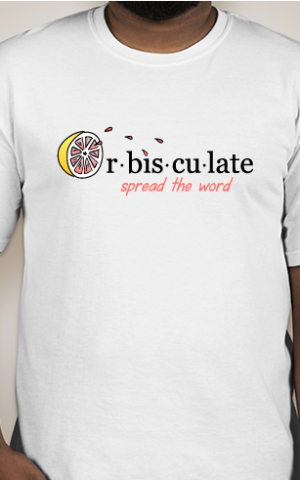 A graphic t-shirt of the word ‘orbisculate,’ which Hilary Krieger is working to have added to the dictionary in tribute to her late father Neil. (Courtesy)

However, to become official, words can’t simply be written about, they must become part of the lexicon. Therefore, articles about Krieger’s campaign to get “orbisculate” into the dictionary don’t count — but, for example, an article in an ophthalmology journal about the risks and treatment for orbisculation would count.

To help spread the word about the word, Krieger and her brother started a website which lists 50 things people can do to help make their case — some easy and some rather challenging.

“‘Orbisculate’ may be the word we didn’t know we needed, but at this point it’s undeniably a word. In retrospect, I may owe Hilary five dollars,” Carey said.

The family is selling brightly designed t-shirts emblazoned with the word “orbisculate” to raise money for Carson’s Village, a charity that helps families in the aftermath of a loss. They’ve already succeeded in getting the word into a crossword puzzle, mentioned on a podcast, into the name of a cocktail and engraved on a grapefruit spoon.

They still hope to persuade Ben & Jerry’s to create a sorbet with orbisculation in the flavor name or Lin-Manuel Miranda to use the word in a song. They’d be tickled to see it used by CNN anchor Don Lemon — or by Liz Lemon, the fictional “30 Rock” character played by Tina Fey.

While the Kriegers’ biggest goal is to see the four-syllable word printed in a published dictionary, the most important thing for the family is how the memorial project gives them something to hold on to, said Krieger.

“Each person deals with grief differently,” Krieger said. “I have found a certain amount of solace in the orbisculate project and how it connects me to other people and to my dad. It helps me feel his spirit.”