Iranian Foreign Minister Mohammad Javad Zarif has found himself under fire after an interview leaked to the press in which he decries the role of the Islamic Revolutionary Guard Corps (IRGC) on Iran’s foreign policy.

Though Zarif has sought to downplay the remarks — which were leaked ahead of the June presidential elections in Iran, and as Tehran and world powers discuss ways to revive the 2015 nuclear accord amid a furious reaction from conservative figures and media outlets — speculation still swirls around who leaked the three-hour segment.

Knowing the identity of the leaker would not only satisfy curiosity around the dramatic episode but, more importantly, would be a telling insight into internal Iranian power struggles and competing visions for the country’s future.

Iran’s Foreign Minister Mohammad Javad Zarif speaks during a session of the Doha Forum in the Qatari capital on December 15, 2018. (AFP)

The comments, which singled out the Iranian Revolutionary Guard Corps for particular criticism, were certainly not strictly classified state secrets. They were meant to be released, sometime after President Hassan Rouhani steps down, in the context of an Strategic Studies Center oral history project by Iranian journalist Saeed Laylaz titled “Beyond the Government,” perhaps as part of the Rouhani camp’s efforts to shape how his tenure is remembered. Still, Zarif insisted at many points that certain statements were strictly off the record, and it certainly was not supposed to be leaked at this point.

But the timing is central to the theories around who might have been behind the leak of the tapes.

The most explosive element of Zarif’s comments is his criticism of the role of the IRGC, and even of its assassinated leader, Qassem Soleimani.

Zarif said that it was Soleimani who truly directed foreign policy, and even attempted to undermine the 2015 nuclear deal. He argued that the IRGC repeatedly sabotaged efforts made by Tehran’s diplomats.

The extracts also suggested Soleimani refused to listen to a request by the Foreign Ministry that Tehran show less overt support for Syrian leader Bashar Assad, including not using state airline Iran Air to transport military equipment and personnel to Syria and not deploying ground forces to the war-torn country. 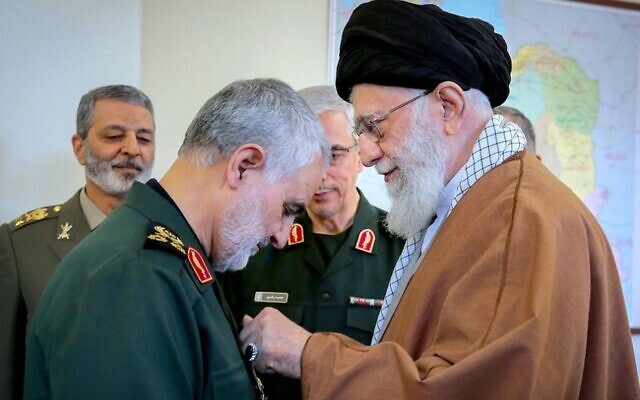 The clout of the IRGC has indeed grown drastically since it was established in 1979 by Ayatollah Ruhollah Khomeini in the aftermath of the Iranian revolution. It was tasked with safeguarding the achievements of the revolution and balancing against the regular army, whose Western orientation made its loyalties suspect to the revolutionaries.

Since then, IRGC influence over Iranian political life has steadily expanded, as it has sought to head off reformist protests over the years. Supreme Leader Ali Khamenei sought a close alliance with the IRGC to strengthen his position against other power centers, including the religious authorities who propelled him to power as a weak figure they could manipulate.

In July 1999, 24 IRGC commanders wrote an open letter to then-president Mohammad Khatami, threatening to use force if his government didn’t take action to break up student protests. In 2009, members of the IRGC-allied Basij paramilitary violently broke up protests by supporters of presidential candidate Mir Hossein Mousavi, who claimed the election was rigged in favor of conservative president Mahmoud Ahmadinejad. Two years later, senior IRGC officials even called for the arrest of Mousavi, Khatami and other reformist figures. 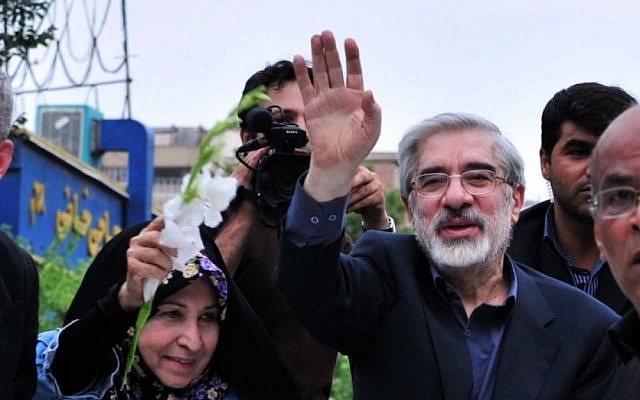 The IRGC’s outsized role in the economy has grown in parallel. Akbar Hashemi Rafsanjani, Iran’s fourth president, initiated a series of market reforms in the 1990s in the wake of the damage caused by the Iran-Iraq War. In order to ensure their support for the changes, Rafsanjani gave the IRGC and Basij roles in the new economy, including control over former state-owned industries. The IRGC economic control expanded further under Ahmadinejad, who appointed IRGC allies and veterans to key government posts.

The IRGC also entered into massive public works and industrial projects, giving them independent sources of funding far from government oversight. When the US imposed sanctions in 2010, the IRGC established a network of companies to circumvent sanctions by smuggling in goods for the black market. Today, the IRGC controls up to two-thirds of the economy by many estimates – including the energy, telecommunications and banking sectors, and construction under the Kahtam al-Anbiya construction firm.

With its political and economic clout – and its operations across the Middle East and beyond – the IRGC has become a formidable player among hardline elements in Iran.

Some believe that the leaks were an attempt by that hardline camp to taint Zarif in the hopes of fatally wounding any hopes he might have of running for president and winning in the June elections.

Others argue it is a sign of chaos within the governing system in Iran, despite the supreme leader’s calls for unity as Tehran negotiates with Western powers in Vienna. “Few are heeding Khamenei’s advice, and are instead in furious competition to disgrace and destroy each other,” wrote Maryam Sinaiee in Iran International, the outlet that first released the Zarif recordings. 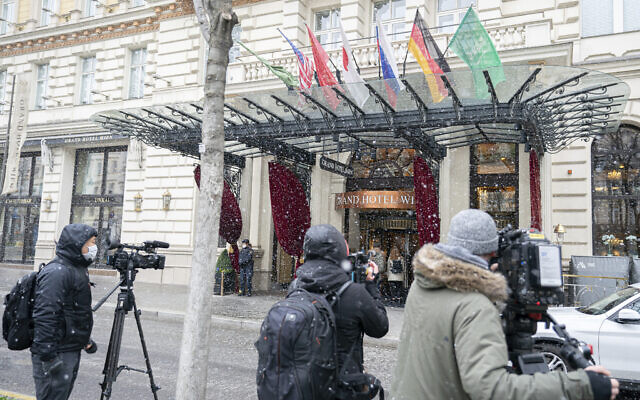 But many more analysts believe that the leak actually came from the pragmatist camp headed by Rouhani and Zarif, and may even have been orchestrated by Zarif himself.

“Seldom is reality in Iran best explained by a surface level interpretation,” said Benham Ben Taleblu, senior fellow at the Foundation for Defense of Democracies. “A more likely interpretation of events is that this was pre-planned and a way for Zarif to virtue signal his differences with IRGC and regain popularity.”

“In a place like Iran, you don’t say these things on any sort of record with the notion that they won’t be leaked,” said Ori Goldberg of the Interdisciplinary Center Herzliya’s Lauder School of Government. “You don’t talk freely in a dictatorship. What you say is always said consciously, in full awareness of the political context. I don’t think Zarif would have been quite so open and quite so detailed in his description of how the IRGC is dragging the country down if he didn’t want word to get out.”

Even if the IRGC did leak the recording, thinking it would damage Zarif, “they’re so out of touch with public opinion that they’ve wildly misread the potential consequences of this,” argued Goldberg.

If Zarif did intentionally release the recordings, who was his audience, and what was he hoping to achieve? 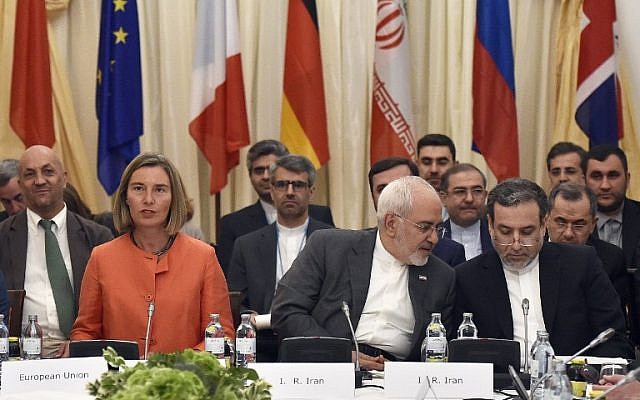 It could be a cynical ploy by Zarif to play up differences within Iranian politics in order to extract concessions in nuclear talks. Hardliners are favored to win the June election, and some believe that Iran will be much less amenable to compromise once Rouhani and Zarif are out of power. The more the West is aware of this looming political change, the thinking goes, the more concessions it will offer in an effort to reach a deal with Rouhani.

“It seems like he has never missed an opportunity to talk about pressure from his right flank in Iran,” Ben Taleblu said. “Zarif is trying to sell the idea that there is diversity behind the curtains, when it comes to Iranian national security decision-making. But Iranian foreign and security policy is less driven by factionalism than ever before.”

Ben Taleblu allowed that the different factions have some influence over the course of nuclear talks, but emphasized that it was only a matter of a different style rather different substance between the camps.

Eran Lerman, vice president at the Jerusalem Institute for Strategy and Security, agrees that Zarif often tries to sell the West on the idea that he represents a moderate camp. “This may be a ploy,” he said. “The Iranians are making an effort to generate this fiction that there are genuine moderates with real influence on Iranian policy.”

“Real policy in Iran is made by one man, surrounded by a coterie of IRGC players.”

Others argue that Zarif’s intended audience was domestic, a move to rally support among Iranians ahead of the upcoming presidential election.

This was a “call to arms,” said Goldberg.

According to this view, there are indeed two competing camps within Iran with fundamentally different visions of what Iran’s future looks like. The tapes allowed Zarif to lay out the ideological contours of his pragmatic camp, and contrast it with the IRGC and the hardliners. 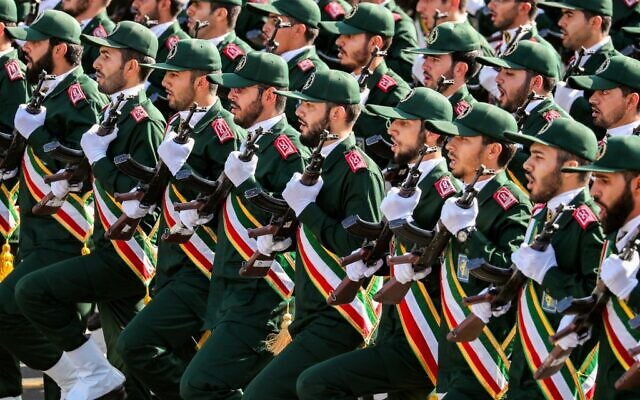 Members of Iran’s Islamic Revolutionary Guard Corps (IRGC) march during the annual military parade marking the anniversary of the outbreak of the devastating 1980-1988 war with Saddam Hussein’s Iraq, in the capital Tehran, September 22, 2018. (Stringer/AFP)

“Revolutionaries are hostile toward the world, and the pragmatists feel like the future of the Islamic Republic is dependent on cooperation with the world,” Goldberg argued. “And Zarif wants to make that very clear.”

This idea that Zarif was making a domestic case against the hardline faction ahead of the elections is supported by the content of the recording, which certainly seemed like a clear, extended argument that fundamental differences exist between two camps, and that the Zarif/Rouhani faction has a positive agenda and vision for the country.

Zarif’s focus in his remarks on the IRGC’s growing control of executive power in Iran could also be central to his appeal to the public ahead of elections.

“The counter to executive power in Iran is public support,” Goldberg explained. “In Iran, you disrespect the public will at your own risk.”

Iranians have forced widespread changes in the country by taking to the streets numerous times since the late 19th century. Starting with a revolt against British tobacco concessions in 1890, Iranians have proven capable and willing to force rulers to support drastic political change, and even to replace the entire political system as they did in the 1979 Islamic Revolution.

Through this lens, Zarif’s comments could have been an appeal to the Iranian people that he needs their support to push back against the influence of the IRGC and the hardliners.

A final possibility is that the tapes were leaked by Zarif as a nod to Khamenei. The regime roots its legitimacy in its claim that it is a popular revolutionary system supported by mass mobilization. Voter turnout is an important element of this claim, but the 2020 parliamentary elections saw the lowest turnout since the 1979 revolution. “Khamenei might be ok with weaponizing Iran’s domestic politics in a bid to get a larger electoral turnout,” said Ben Taleblu. 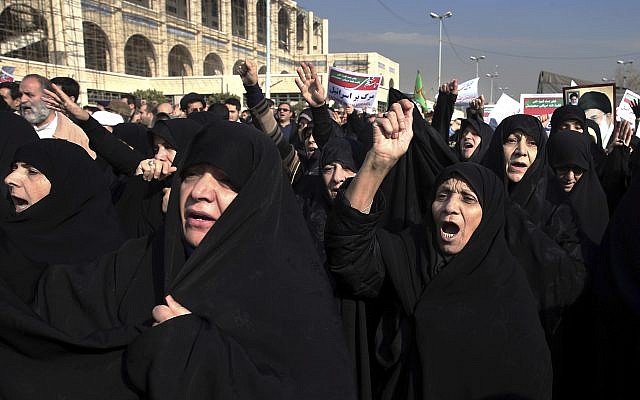 Despite the maneuvering ahead of the June elections, foreign observers and governments shouldn’t exaggerate the implications of the political dynamics within Iran.

Rouhani and Zarif represent a particular approach to Iranian foreign policy, but they are not looking to upend the regime. “They’re not reformists, they consider themselves loyal sons of the system,” Goldberg stressed.

Many Iranian protesters have been voicing their displeasure at this state of affairs. Since the anti-government protests that erupted in late 2017, slogans like “reformists, traditionalists, the jig is up!” have been heard on the streets.

Whether Zarif or another reformist candidate or one of the hardline candidates wins in June, the regime will still be in place, with a foreign policy dominated by the IRGC at the direction of Khamenei.

“Washington and other audiences need to be cognizant but not consumed by Iran’s domestic politics,” said Ben Taleblu, “consumed by thoughts that tinkering among the fractious factions in Iran’s authoritarian system will necessarily produce some kind of change. “

“Ultimately, the most important change will come from outside of the system of the Islamic Republic, not from inside.”